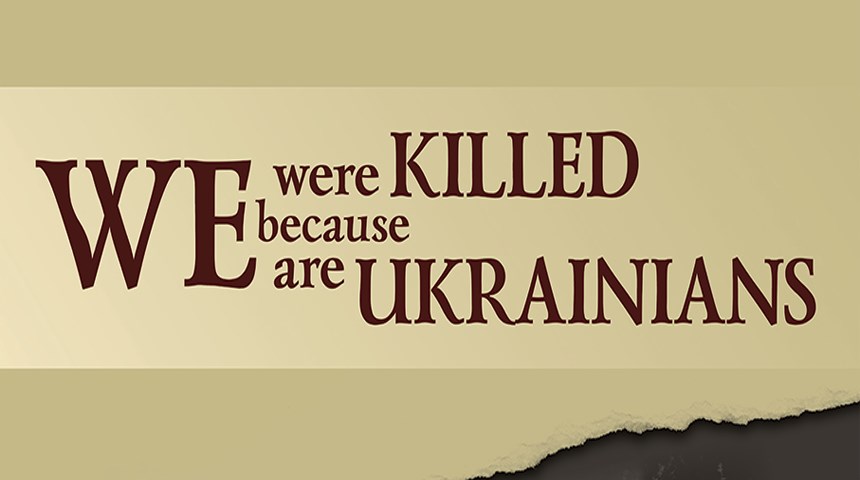 "We were killed because we are Ukrainians"

After the proclamation of the Convention on the Prevention and Punishment of the Crime of Genocide over 70 years passed. But the mass killing and genocides are flaring up in different parts of the world even today. For Ukraine, the issue of preventing the crime of genocide is particularly important. In 1932-1933, a genocide called the Holodomor was committed by the Soviet regime against the Ukrainian nation. For over 60 years, Ukrainians were forbidden even to remember their relatives who were killed by hunger during Holodomor. That is why the world knows so little about such a brutal and massive crime, the victims of which were more than 7 million people. Informing the world community about the Holodomor is relevant, as today’s governments of certain countries use hunger as a weapon of murder.

Ukraine appeals to the international community to recognize the Holodomor as an act of genocide against the Ukrainian nation, condemning Stalin’s policy and the communist Soviet regime. After all, the postponed by the world condemnation of the Soviet regime and its crimes led to the new ones.

The Russian Federation, which is the successor to the USSR and officially denies the genocidal nature of the Holodomor, in 2014 made a military invasion into the territory of Ukraine. Today we are witnessing on the Ukrainian territories occupied by Russia the persecution of Ukrainians through Ukrainian language, expression of civilian views, and pro-Ukrainian feelings. Public burning of books about the Holodomor was carried out by the Russian forces in the annexed Crimea. A number of scientific publications by leading scholars of Holodomor officially considered as an extremist literature. In Russia, the government imposed an iron taboo on the truth about the Holodomor. Instead, it revives the cult of Stalin’s dictator. These trends raise concerns and anxiety.

The exhibition is of particular relevance for Ukrainian citizens. The Holodomor took millions of lives; it went through almost every Ukrainian family: some families fell by half, others by a third, and some did not go on. There are no documents, like graves, about the deaths of millions. There is only general statistics and thoroughly unidentified mass graves. For decades, Ukrainians have been trying to forget the horror of 1933, both through pain in their hearts and fears of threatening their children (because people were punished for talking about the Holodomor).

Is the one who says that there was no famine sure, that his relatives were not victims? Do all Ukrainians know how and why the Holodomor was committed? Why Holodomor is the genocide and why is it so important to know?

Analyzing historical experience, Ukrainian citizens today should more than ever realize that their safe moral, spiritual and physical existence is possible only in an independent Ukrainian state.

It is based on archival materials, memories of people who have survived the Holodomor, the researches of leading researchers and jurists.