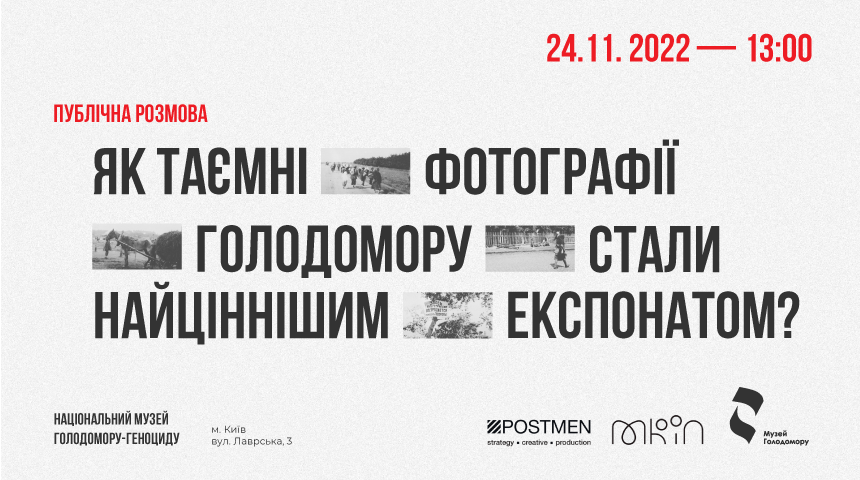 Public talk “How the secret photographs of the Holodomor became the most valuable exhibit?”

Why are there so few photos depicting the realities of the Holodomor? Who photographed the genocide victims on the streets of Kharkiv, and how did these photographs survive to this day?

Historians and museum workers will talk about the details of the discovery of Holodomor photographs taken by the Austrian engineer Alexander Wienerberger and their role in researching the history of the Soviet extermination of Ukrainians and reproducing the truth about this crime during the discussion “How did secret photographs of the Holodomor become the most valuable exhibit?”

The event will take place within the exhibition “Leica that saw the Holodomor”, dedicated to the 90th anniversary of the Holodomor.

Participants of the talk:

Samara Pearce, the great-granddaughter of Alexander Wienerberger, keeps an album with photos of the Holodomor and a camera that her great-grandfather used to photograph the victims of the Kharkiv genocide in 1933. Samara will share her insights into Alexander’s life from his written memories and his daughter’s words.

Vasyl Marochko, professor, and employee of the Holodomor Museum and the Institute of the History of Ukraine of the National Academy of Sciences of Ukraine, who was one of the first historians to discover these photos for Ukraine. The professor worked with Wienerberger’s second album of Holodomor photographs (now stored in the Archives of the Diocese of Vienna) and will publicly share details of those events for the first time. Vasyl Marochko will also give a historical assessment of the Wienerberger figure in the context of the history of the Holodomor and the memory of this crime.

Oksana Yurkova, Candidate of Historical Sciences, Institute of the History of Ukraine of the National Academy of Sciences of Ukraine will talk about the historical authenticity and relevance of the illustrations that often accompany scientific and journalistic materials about the Holodomor of 1932–1933, and will also explain how Wienerberger’s photographs became public.

Yana Hrynko, the head of the exposition and exhibition department of the Holodomor Museum, will talk about the museum value of Alexander Wienerberger’s photographs and camera and their place in the future main exposition, which will be implemented in the second phase of the Museum.

Oleh Kryshtopa, a writer and author of the YouTube channel  “History for Adults,” will be a moderator of the public talk.