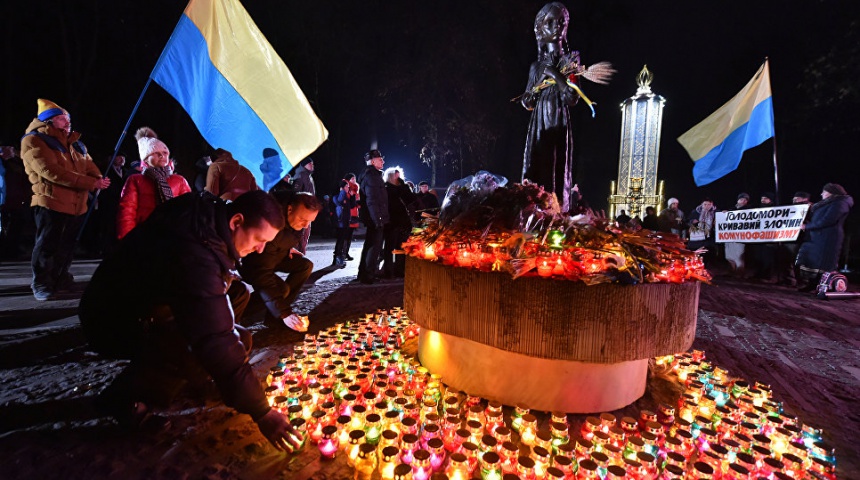 In 1932–1933, the Soviet Union authorities, intenting to destroy a part of Ukrainian national group, officially denied the mass deaths from famine in Ukraine and refused to receive a foreign aid, which was offered, often with the assistance of Ukrainian immigrants. For decades, in the USSR, the memory about the victims of the Holodomor was prohibited — no public awareness about this, no commemorating innocent victims.

Only aftet the restoration of state independence, Ukrainians became able to break a taboo on the Holodomor. The power of this process were people who, in spite of the official silence of the regime, have always remembered what the authorities did to the Ukrainian nation in the early 1930s. Also, thanks to the Ukrainians and all those who supported them, who kept the memory of the Holodomor outside the USSR and passed it to their children from 1933 until today!

In September of 1933, all those who had sympathy to Ukrainians and condemned the actions of Soviet authority, commemorated the victims of the Holodomor. So, on September 11, 1933, a day of mourning for millions of Ukrainians who died of starvation and a memorial service for the appeals of the Administrator and Apostolic Visitor for Ukrainian emigrants in Germany, Prist Petro Verhun, took place in Berlin. 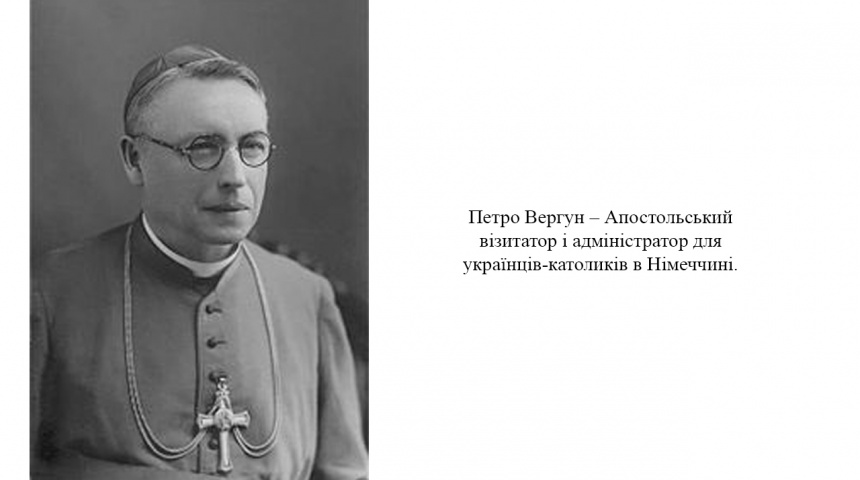 And on September 13, Bishop of the The Ukrainian Greek Catholic Church in Canada Vasyl Ladyka gave a pastoral word to Ukrainians living in Canada, with a sharp condemnation of the actions of Soviet power in Ukraine. 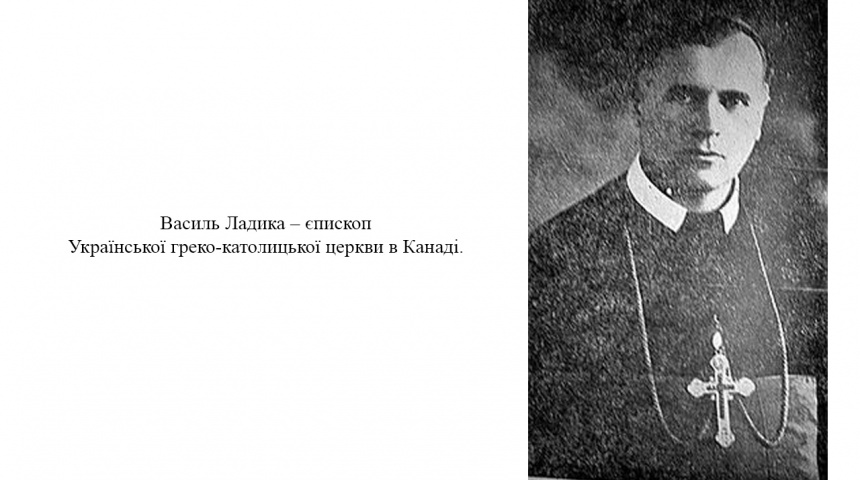 Western Ukraine, which at the time of the genocide of Ukrainians was not a part of the Ukrainian SSR, didn’t remain indifferent to the fate of its brothers. Ukrainians in these areas have made great efforts to raise issues of stopping the starvation of Ukrainian nation on the international scene, organizing numerous financial and food aid. Unfortunately, they were powerless against Soviet propaganda and armed Soviet security forces, which settled along the perimeter of the Ukrainian SSR border, transforming Ukraine into a social reservation area. On October 29, 1933, in Lviv, at the St. George Cathedral, a liturgy for millions of killed Ukrainians was held, attended by representatives of the Public Committee for the Salvation of Ukraine, created by Metropolitan Andrey Sheptytskii. Divine worship was held in all churches of the Galician Church province. 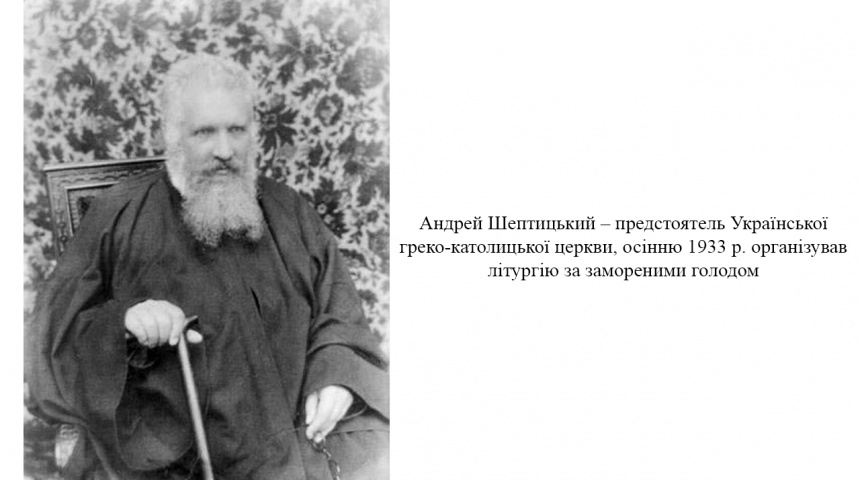 The following well-known public sorrow events organized by Ukrainians in exile took place in the United States almost 20 years after the genocide. So, on September 11, 1951, in New York, a meeting to commemorate the victims of the Great Famine of 1932-1933 was held with the participation of Mayor Vincent Impelliteri and Professor of Yale University, Raphael Lemkin, author of the legal term “genocide”, who called the Soviet Union’s actions against Ukrainians “a classic example of genocide”. Later, Lemkin appealed to the United Nations to recognize the violation of the 1948 United Nations Convention on the Prevention and Punishment of the Crime of Genocide from the USSR side.

Already on September 21, 1953, at the march of Ukrainians in the United States on the occasion of the anniversary of the Great Famine of 1932-1933 in Ukraine, Raphael Lemkin delivered the famous speech “Soviet Genocide in Ukraine”, in which he outlined his own concept of genocide of Ukrainians. 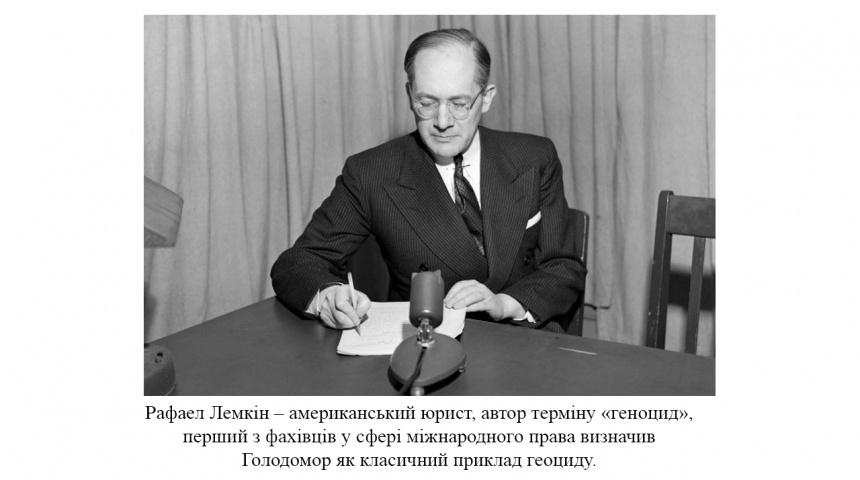 By the 40th anniversary of the Holodomor, on September 23, 1973, the New York Department of the Ukrainian Congress Committee of America organized a major demonstration in memory of the Holodomor victims in Ukraine in 1932-1933.

Since 1983, the capital of the Canadian province of Alberta, the city of Edmonton, has been commemorating the Holodomor victims on an official level. That year, in Canada, the world’s first monuments to the victims of the Holodomor were erected: “The broken ring of life” in Edmonton and a memorable sign with dedication: “In memory of more than 7 million victims of the 1932-1933 famine genocide in Soviet Ukraine , Stalin’s crime against humanity” in the city of Winsor. 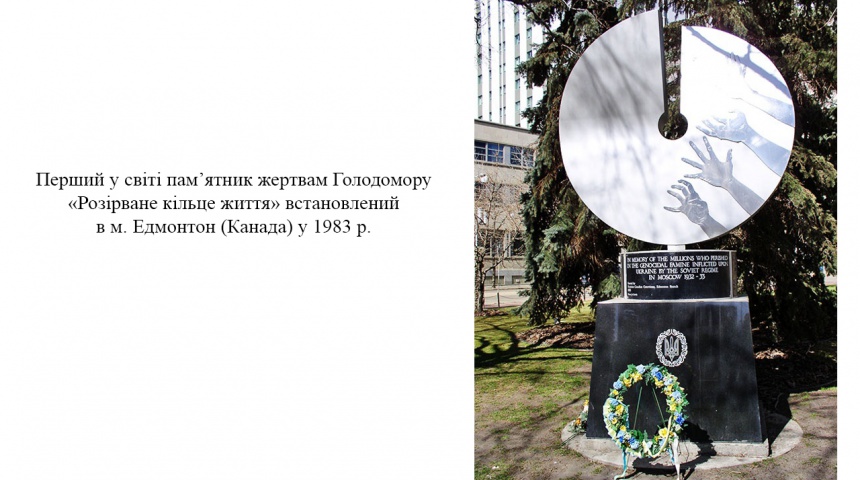 In Ukraine, the commemoration ceremony of the victims of the Holodomor became possible only with the collapse of the Soviet Union and the restoration of Ukraine’s state independence. Since the late 1980’s, thanks to the active public, in September 1990, in many regions of Ukraine, sorrowful events and memorial services for the killed Ukrainians took place in 1932-1933. The 1990s in Ukraine marked the launch of a broad research, scientific, educational and cultural work aimed at restoring the memory of millions of victims of the Holodomor. With the proclamation of independence in 1991, the state joined forces to commemorate the victims of crime and to restore historical truth. But the presence of high-ranking people who were adherents of communism in the past was evident. Therefore, no financial support from the state budget has been received. Although projects funded by sponsors and philanthropists were implemented without obstacles. 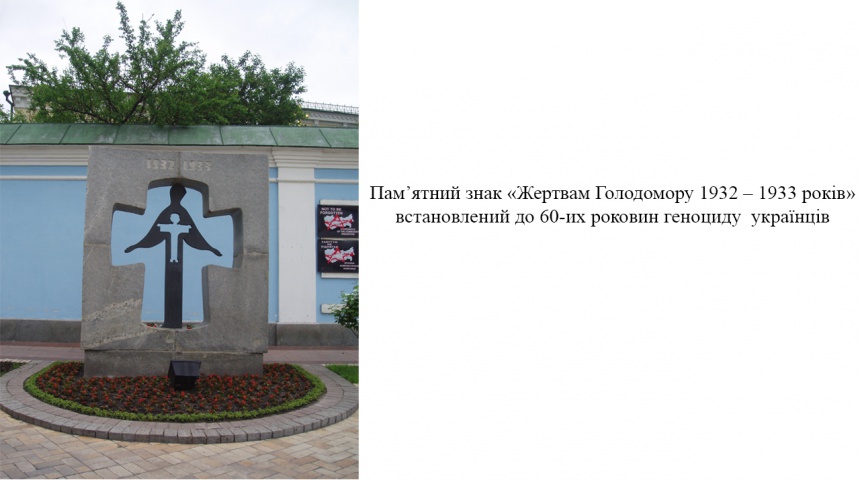 Due to various circumstances, the name of this memorable day was changed several times: in 2000 it was changed to “Memorial Day of the Victims of the Holodomor and Political Repressions”, in 2004 – “Memorial Day of the Victims of Holodomors and Political Repressions”, in 2007 – “Holodomors victims Remembrance Day”. The name of the all-Ukrainian commemorative day “Holodomor victims Remembrance Day” is still only present in the oral tradition.

In 2016, a public discussion of this issue took place at the National Museum of the Holodomor Victims Memorial, with the participation of historians and public figures. The majority of the participants supported the decision on the expediency of renaming the memorable day, “Holodomors victims Remembrance Day”, to the “Holodomor victims Remembrance Day”. After all, as of today, in Ukraine, only the Holodomor of 1932-1933 at the legal and legislative level is recognised as genocide. Events of 1921-1923 and 1946-1947 are classified as mass famine, the genocidal nature of which is not yet proven. Consequently, the usage of the word holodomors in plural devalues the notion of Holodomor of 1932-1933 as genocide. Also, the use of the notions of “holodomors” in the plural is often the cause of criticism from the world community and opponents, and is the reason for not recognizing the Holodomor as genocide of the Ukrainian nation.

Since 2005, the issue of studying the Holodomor, honouring the memory of millions of victims and recognizing it as genocide was conducted at a much higher level, since this topic was one of the priorities of the policy of the memory of the President of Ukraine Viktor Yushchenko. Exactly by then in Ukraine, Ukrainian representations in the world, and countries where Ukrainian live, in practice, the annual sorrowful events to the Holodomor Victims Remembrance Day on the fourth Saturday of November were implemented. Traditionally, on the fourth Saturday of November, at 16:00, the memory of more than 10,5 million Ukrainians killed during the genocide is commemorated with a moment of silence and lighting of candles in the central squares of the city, near the monuments to the victims of the Holodomor, in temples and in the Hall of Memory at the National Museum “Holodomor Victims Memorial” in Kyiv. The tradition of lighting candles on the windowsills at homes, the so-called “Candle in the Window” campaign, is suggested by the researcher of the Holodomor James Mace in 2003: “Even seven decades later, a candle that flickers in the window seems to me to be a worthy reply”.