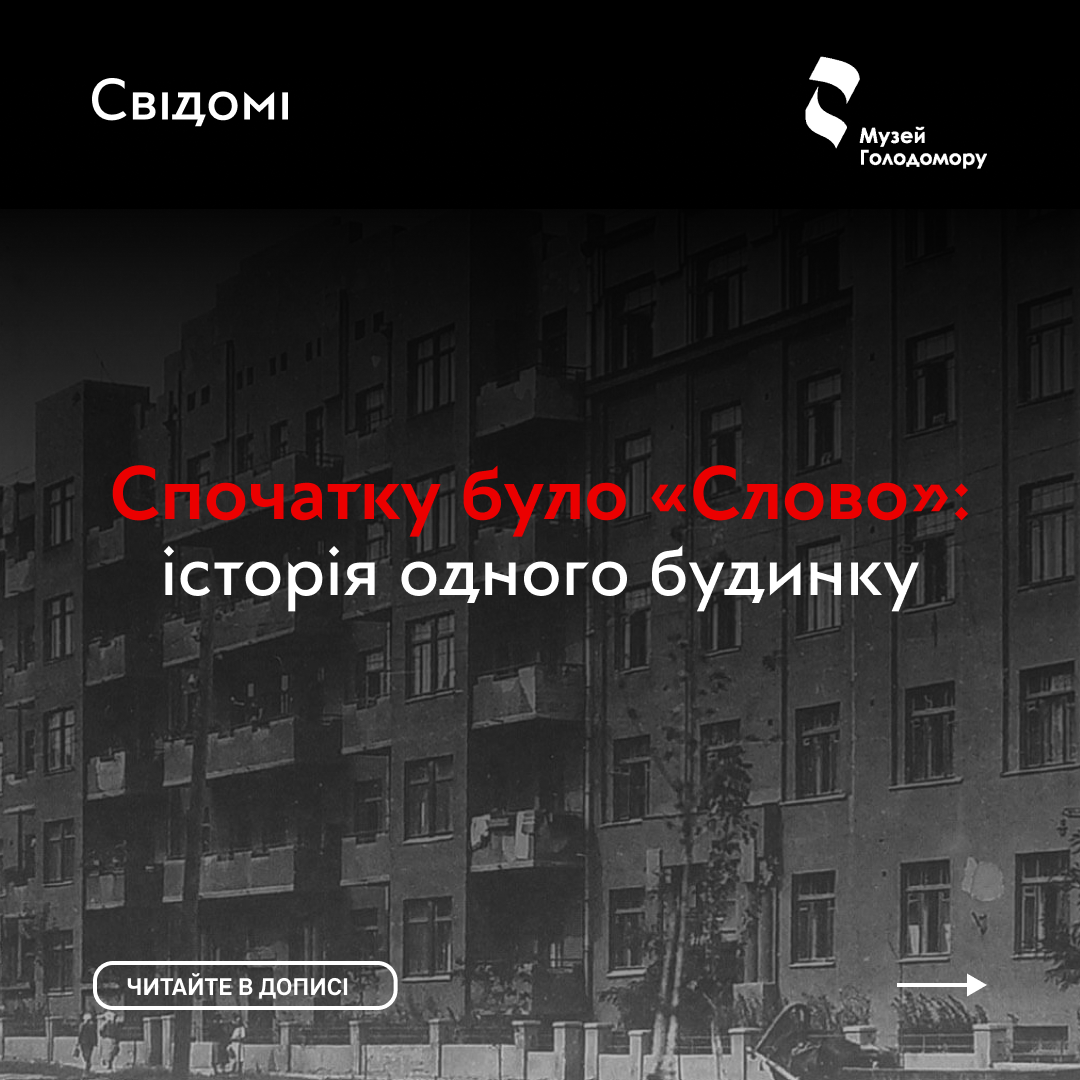 At first, there was “Word” (“Slovo”): the story of one house

On May 12, 1933, a “black raven” stopped at the entrance of the house. That night, the Soviet special services arrested the writer Mykhailo Yalovy. Yalovy did not return: on November 3, 1937, the writer was shot in the Sandarmokh. As well as other residents of the “Slovo” building (“slovo” in Ukrainian means “word”).

At the beginning of the 20s of the last century, Kharkiv became one of the key centres for writers and cultural figures. To solve the housing problem, the writers created a cooperative and built the house “Slovo”. It began to be settled in 1930.

“The place for the house was chosen successfully,” one of the newspapers wrote. “The location completely ensures complete peace of mind for the writer’s work.” At that time, no one knew that peace was something that the inhabitants of “Slovo” would never have.

At first, artists were allowed to work and show themselves. More precisely, to express themselves. Trying to win favour, the Soviet regime took a course on Ukrainianization. Scientists call this period (the end of the 20s — the beginning of the 30s) the “day of the Ukrainian renaissance.” In Kharkiv, newspapers, and magazines were published in Ukrainian, the Ukrainian Literary and Scientific Institute was founded, Les Kurbas and Mykola Kulish stirred up theatrical life with the “Berezil” theatre, and literary discussions took place between writers’ groups and associations. All this was covered by the darkness of repression later.

After Mykhailo Yalovy’s arrest and Mykola Khvylovy’s suicide, night visits to “Slovo” became more frequent. Residents secretly called the building the “House of Pretrial Detention,” and the Chekists themselves “joked” that to save fuel it was enough to put bars on the windows and doors, and no one would have to be taken out. For them, an “enemy” lived in every apartment.

Already at the end of 1933, Volodymyr Hzhytskyi, Serhii Pylypenko, Oles Dosvitnii, Ostap Vyshnia, and others were arrested one by one for allegedly preparing terror against party figures. After a short “investigation,” only Hzhytskyi and Vyshnia survived – the others were shot.

Other artists, who also became victims of the regime, were settled in place of those arrested. In some apartments, 2-3 owners were repressed. Apartment No. 54 had an anti-record: the owner Vasyl Vrazlyvy, his guest Ivan Bahrianyi, tenants Yevhen Pluzhnyk and the Krushelnytskyi family of six were arrested there.

In November 1934, the NKVD wanted to arrest the satirist Vasyl Mynko. He was not at home, so they knocked on the door of the apartment on the floor below. The door was opened by the poet and translator Vasyl Mysyk. He failed to explain that he was a different person, as he was arrested. Mysyk was released after a five-year term in Solovki, although all this time he was proving that he was not Mynko.

In November-December 1934, the “black raven” took out Oleksa Slisarenko, Geo Shkurupia, Yevhen Pluzhnyk, Mykola Liubchenko, Hryhorii Epik, Andrii Paniv, Mykola Kulish, Valerian Pidmohylnyi, Vasyl Shtank, Hryhorii Strilets, Antin and Taras Krushelnytskyi, Dmytro Levchuk and Kostia Burevii. The last five were shot almost simultaneously with the arrest. The rest were sentenced to 10 years in the camps, giving hope for salvation. However, in 1937, the “special trio” (three people who in 1937-1938 were sentenced to death or deprived of their liberty for 8-10 years without a trial) of the UNKVS of the Leningrad region reviewed the previous sentence and sentenced the prisoners to be shot for “continuing to be in their counter-revolutionary positions”.

On November 3, 1937, in honour of the 20th anniversary of Great October (official wording), Epik, Pidmohylnyi, Kulish, Zerov, Voronyi, Pylypovych, Pylypenko, Irchan, Kozoris, Pavlushkov, Chekhovsky, and others were shot in Solovki. In total, out of 66 apartments in the building, 40 houses were affected by the repressions. 33 people who lived there were shot, and more than 70 were repressed.

In 2005, a memorial plaque in honour of the residents appeared on the facade of the Slovo building. It has the appearance of a huge open book, where almost all famous artists’ names of that time are written. Here they are together – both those who were killed, those who passed through the camps, and those who broke and began to serve the regime.

On March 7, 2022, the crime against the building and its residents was repeated — in early March, a shell damaged the building: fragments cut through the walls of the building, broke windows, and destroyed the entrance to one of the entrances.