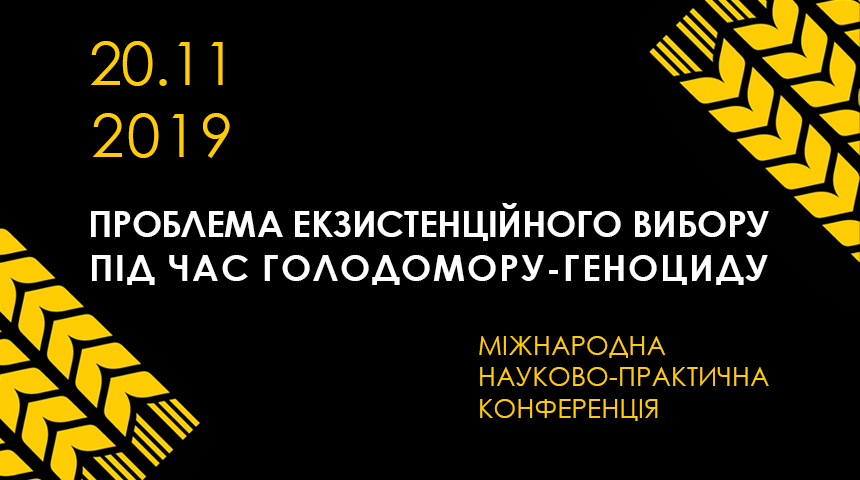 On November 20, 2019, at the main building of the Kyiv National Taras Shevchenko University, International Scientific and Practical Conference “The Problem of existential choice during the Holodomor-genocide”  was held. The socio-psychological influences on people’s choice under the threat of famine were determined by many factors, including regime pressure, the destruction of the family model and the substitution of life values, and each individual’s vision of their future.

The conference provided a clearer understanding of the effects of the Holodomor genocide that still influences Ukrainians’ worldview, as well as the course of the society and state.

The conference aimed to focus on the problem of irreversible personal choice from the available range of opportunities during the commission of genocidal acts.The modern realities of Ukraine necessitate a socio-philosophical analysis, as the “crowd unit” of human beings in the previous totalitarian society develops into a mature person capable of freedom of thought and action, including governance and protection of their interests at various levels. The Ukrainian example is a deadly threat to modern totalitarian regimes. The study of the problem of existential choice is exceptionally relevant in the current Russian-Ukrainian war.

The conference was organized by:

The representatives of the organizing committee launched the conference.

Volodymyr Bugrov, the vice-rector for scientific and pedagogical work at the Taras Shevchenko Kyiv National University, said that Ukrainians should always remember the Holodomor, and not commemorate the millions killed by famine just in November. In turn, such conferences should be held annually in order to expand research on this important topic for Ukraine and the world.

Olesia Stasiuk, Candidate of Historical Sciences, Director General of the National Museum of the Holodomor Genocide: “Problems of Existential Choice” is the third international conference co-organized by the Holodomor Museum. A year ago, the Holodomor Research Institute, an institution dedicated to carrying out thorough research into the Holodomor genocide, opened at our museum. Today we present two new editions of the museum: “Holodomor-Genocide: Terminology” and “Ukraine and Ukrainians: Name as a Battlefield.” We also bring to your attention the exhibition “The Holodomor: Destruction of Identity.”

Mykola Kocherha, President of the Ukrainian Genocide Famine Foundation (Chicago, USA), said: “We are very pleased that our Foundation is on time and we can help with scientific research and the achievement of new research goals.”

Serhii Kasianchuk, director of the Ukrainian World Congress in Ukraine, began his speech with the good news that another province in Canada had recognized the Holodomor as genocide. The speaker brought the audience’s attention to the fact that the events of 1932-33 in Ukraine were the result of the long history.

Bohdan Morklianyk, deputy chairman of the board of the Vasyl Stus Memorial All-Ukrainian Human Rights Organization, said: “The main task of the Holodomor was to destroy public opinion. The bleeding of Ukraine began with the disarmament of the intelligentsia. And we undeservedly forgot about Stalin’s first job as commissioner for nationality. He fulfilled his task. Now is the time for us to revive and defend our Ukrainian identity. “

The moderator of the International Conference was Ivan Patryliak, Doctor of Historical Sciences, Professor, Dean of the Faculty of History of Kyiv National University.

After greeting the conference participants, a ceremony was held to present the honorary award – the Gareth Jones Medal. Volodymyr Serhiichuk and Vasyl Marochko, leading  of the Holodomor Research Institute, as well as Larysa Ivshyna, editor-in-chief of The Day, and Myroslava Prykhoda, initiator and head of the Gareth Jones Journalist publishing project, received the award.

Viktor Brekhunenko, Doctor of History, Professor, Director of the Holodomor Research Institute, addressed the audience: “The Holodomor is a strategy of the totalitarian government to destroy the Ukrainian identity. The task of our institute is a systematic and in-depth study of archives and documents. The first results of our research give hope for great achievements in the future. “

More than 40 scientists, 15 of whom are doctors of science, registered to speak at the conference. The event drew Holodomor researchers from all over the world, including the United States, France, Spain, and Lebanon.

At the plenary session, Viktor Brekhunenko highlighted the study of the Holodomor as a life choice. Myroslava Antonovych spoke about the relationship between individual and collective intention to commit genocide of the Ukrainian nation. Iryna Dmytryshyn, Associate Professor of the Institute of Oriental Languages and Cultures (France), explained why Eduard Herriot decided not to notice the Holodomor. Volodymyr Serhiichuk showed the audience archival documents, the analysis of which provides reasons to speak about the fact that approximately 3.5 million children died from starvation in 1932-1933.

Vasyl Marochko, Doctor of Historical Sciences, Professor, Chief Researcher of the Institute of History of Ukraine of the National Academy of Sciences of Ukraine, Leading Researcher of the Holodomor Research Institute, prepared a report on the fateful choice of the famous demographer Arsen Khomenko: “A well-known researcher links demography with the level of collectivization because mortality and birth rates are linked more closely to living conditions.”

Victoria Malko, a professor at the University of California, Fresno (USA): “Educators used to be a tool to influence the youth ideologically, and those, who did not want to serve the totalitarian regime, were arrested. As a result, schools lost approximately 10,000 teachers, who were the bearers of Ukrainian identity, in 1932.

Volodymyr Serhiichuk noted: “Primary school was mandatory in 1932, and it is thanks to the reports of educational organizations that we can trace the numerous losses of children’s souls. Children have the least choice – they do not choose when to be born.

The archives, unfortunately, are in a terrible state, lost certificates of both birth and death. However, in researching the Holodomor victims, modern scientists use all possible saved documents (including school data) to calculate the loss of famine, as well as to investigate the number of unborn children.

Publisher Marko Melnyk was a special guest at the conference.At the International Conference “Problems of Existential Choice during the Holodomor Genocide,” he presented various books to the conference participants: “The Famine of 1946-1947 in Ukraine: Collective Memory,” “Ukraine. The Famine of 1946–1947: Unpunished Crime,” “Forgotten Good,” and “Bow to the Angel.” Everyone could buy any book at a price they set themselves.All the funds raised during the campaign will go to a joint project with Express magazine to erect a monument to Taras Shevchenko in the Donetsk region in Oleksandro-Kalynove village. The village community has been dreaming of its establishment for many years. The monument will become a symbol of affirmation of the invincibility of Ukrainians on the front line of Donbas.

Many educational and presentation events on the Holodomor genocide of 1932-33 and mass man-made famines of 1921-23 and 1946-47 are also planned there.