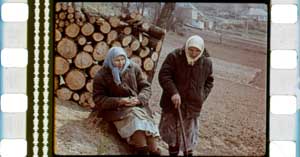 Filming of this documentary began in 1987 and ended in 1989. As archival materials and newsreels were inaccessible, the authors of the film appealed to the Holodomor witnesses through the press. Their stories became the basis of the documentary. Stalin’s supporters tried to prevent the authors from making the film, and it was forgotten for a long time. Only in 2005 the film 33rd. Witnesses’ Testimonies was re-filmed from the newsreels of 1989 version and the memoirs of Mykola Loktionov-Stezenko himself. At his anniversary party at the Cinema House on February 16, 2009, the author called this documentary a testimony to his personal tragedy: his parents died of the Holodomor of 1932–33. For the film 33rd. Witnesses’ Testimonies Mykola Loktionov-Stezenko was awarded the Order of Merit of the III degree.

The documentary is avaliable by the link.