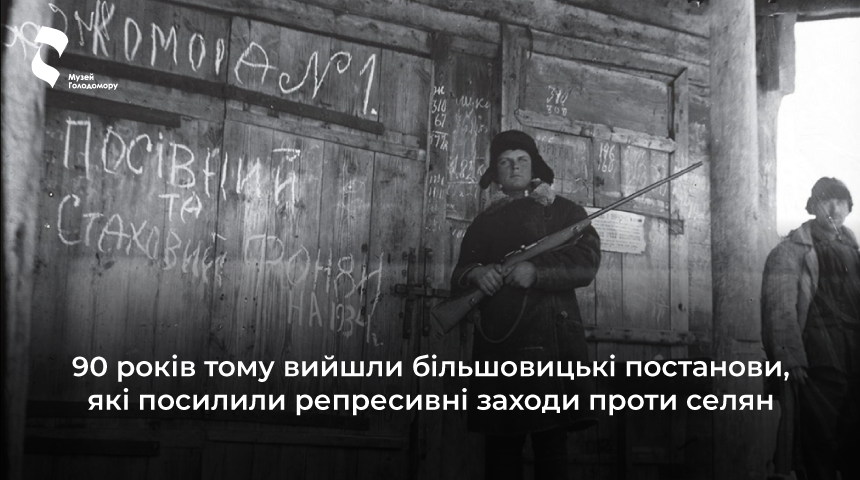 90 years ago, the infamous resolutions of the Politburo of the Central Committee of the Communist Party (b) of Ukraine, “On measures to strengthen grain procurements.” and “On the elimination of counter-revolutionary nests and the destruction of Kulaks’ groups,” dated November 18, 1932, were issued. They further intensified the repressive measures against the Ukrainian farmers.

In particular, it was the resolution, “On measures to strengthen grain procurement,” that required putting “especially malicious saboteurs,” collective farms that failed to fulfil the plan, on the “black board.”

At the same time, the resolution introduced the position of a special controller at threshing machines, created troikas at MTS, village councils and district executive committees. They were obliged to winnow straw, chaff, and waste, to check the social background of accountants in collective farms, to prosecute those guilty of stealing and hiding bread, and to apply the law of “five ears of grain” to them.

Separate punitive and repressive measures were provided for individual farmers: a fine in kind in the form of a 15-month norm for household meat harvesting, and an annual norm for the delivery of potatoes, they also had to urgently return seed and food loans to collective farms.

These resolutions became another tool of the Soviet regime for the planned confiscation of grain harvest and all other food products from the peasants. Very soon, this led to the mass killing of people by hunger, the apogee of which fell on May-June of the following year.