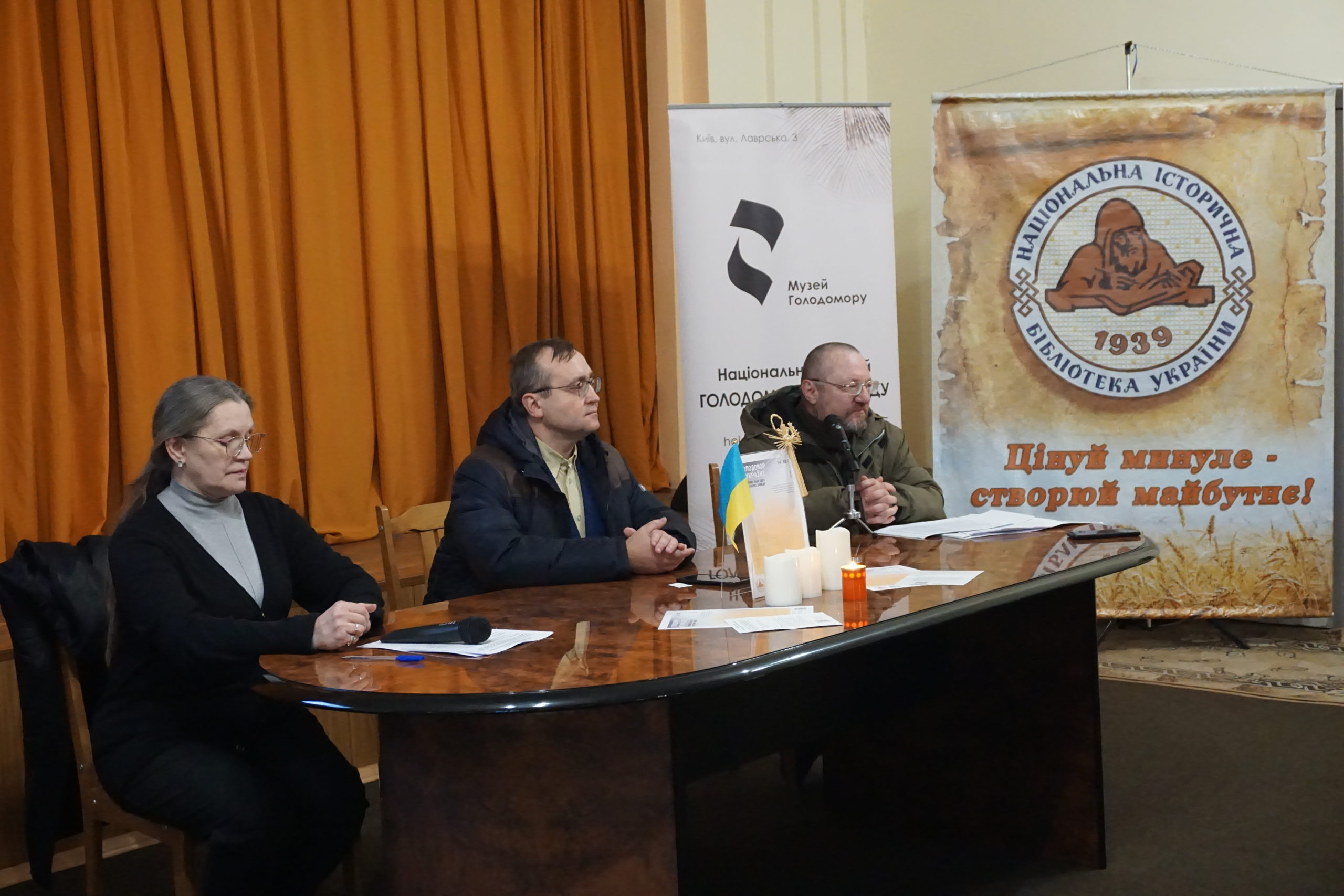 Andrii Ivanets, a moderator of the public discussion, candidate of historical sciences, and leading researcher of the Holodomor Research Institute, emphasized: “The Holodomor did not break Ukrainians although it was a colossal shake-up of the foundations of our nation’s existence and a real threat to its existence. But we survived, we fight. We remember those who died in those tragic years. And this memory today, paradoxically, makes us stronger.” He proposed to honour the memory of the Holodomor victims with a moment of silence. In the post-genocide Ukrainian society, which for decades was forbidden even to mention the Holodomor, such actions are crucial because they have a strong healing effect – we are finally working through and healing our trauma caused by the famine 90 years ago.

Doctor of historical sciences, professor, and head of the department of the Holodomor Research Institute Dmytro Bilyi spoke in his lecture about a little-known page of our nation — the genocide of Ukrainians in the Kuban. Kuban, where the Cossacks of the liquidated Zaporizhzhia Army moved back in the 18th century, preserving their language, traditions, and culture, was one of the most anti-Soviet regions. When the Ukrainization announced by the Soviet government began, this process took on a particularly rapid development in the Kuban. As of 1932, 1,660 Ukrainian schools were operating there, many books were published in huge volumes in Ukrainian, and M. Skrypnyk North Caucasus Ukrainian Pedagogical Institute (now Kuban State University) operated there. And the long-standing dream of the Kuban people — to join Ukraine or to become a separate autonomous district — was again on the agenda. This dream was brutally suppressed by the Holodomor.

“Surrounded by troops, the Kuban, like Ukraine, found itself in an iron ring. There was a strict regime of “black boards”, says Dmytro Bilyi. — This means that food was not brought into the Kuban villages, and people were forbidden to leave the settlements. Thus, the region was doomed to a terrible starvation. My native village of Novoderevyankivska appeared on the “black board” and only 6,000 of the 18,000 people there survived. Ukrainians were forbidden to settle in extinct villages but only Russians. These and other repressive measures led to the fact that according to the census of 1937, and then the regional census of 1939, only 3.5-4 percent of Ukrainians remained in the Kuban, although as early as 1926 there were 62 percent of them. The rest were starved, deported, shot or recorded by the Russians. According to my calculations, the losses of the Kuban during the Holodomor and repressions amount to more than a million people.”

Andrii Ivanets, in his lecture dedicated to the figure of Milena Rudnytska, told how this woman managed to get the League of Nations to investigate the Holodomor crime. Thanks to her connections and acquaintances, and somehow – a happy coincidence of circumstances, Milena Rudnytska, who in 1933 became the deputy head of the Public Committee for the Rescue of Ukraine, created after Andrey Sheptytskyi’s pastoral message “Ukraine in the throes of death”, achieved the impossible – she lobbied for consideration of the issue about the Famine in Ukraine at that important gathering.

On September 29, 1933, all its members – representatives of 14 states – gathered for a closed meeting of the Council of the League of Nations. The debate was long and heated. No one denied the fact of famine, but representatives of states interested in political and economic cooperation with the USSR referred to formal obstacles to consideration of this issue by the League of Nations. In the end, the Council of the League of Nations decided to transfer the case to the International Committee of the Red Cross, offering it to organize international aid for Ukraine. “In this way, the League of Nations, under the pretext of procedural obstacles, washed its hands like Pilate. However, the tragedy of the Ukrainian people was, perhaps, during one meeting in the centre of attention of the official international world,” Milena Rudnytska later recalled.

The participants of the public lecture could also view the thematic exhibition of stamps and envelopes from the collection of Andrii Ivanets. In the exposition, we can see non-postal stamps of the Ukrainian Congressional Committee of America, the Underground Post of Ukraine (the postal department of the Foreign Parts of the OUN), other structures of the Ukrainian diaspora, envelopes of the “Cossack Post” of the publisher, artist and traveller Andrii Pyliukh (Lviv), postage stamps and envelopes of Ukraine. These are the ones which tell or remind Ukrainians and the world of the truth about the man-made famine disaster of 1932-1933.

“Non-postal stamps with the theme of the Great Famine, which were issued by organizations of the Ukrainian diaspora since 1953, were pasted on envelopes next to postage stamps and further they carried the truth to the world about the crime of the communist USSR and the tragedy of the Ukrainian people. Many such stamps are kept in collectors’ collections and they continue to tell about the Holodomor,” Andrii Ivanets said.

The exhibition will run in the reading room of the National Historical Library until December 7, 2022.