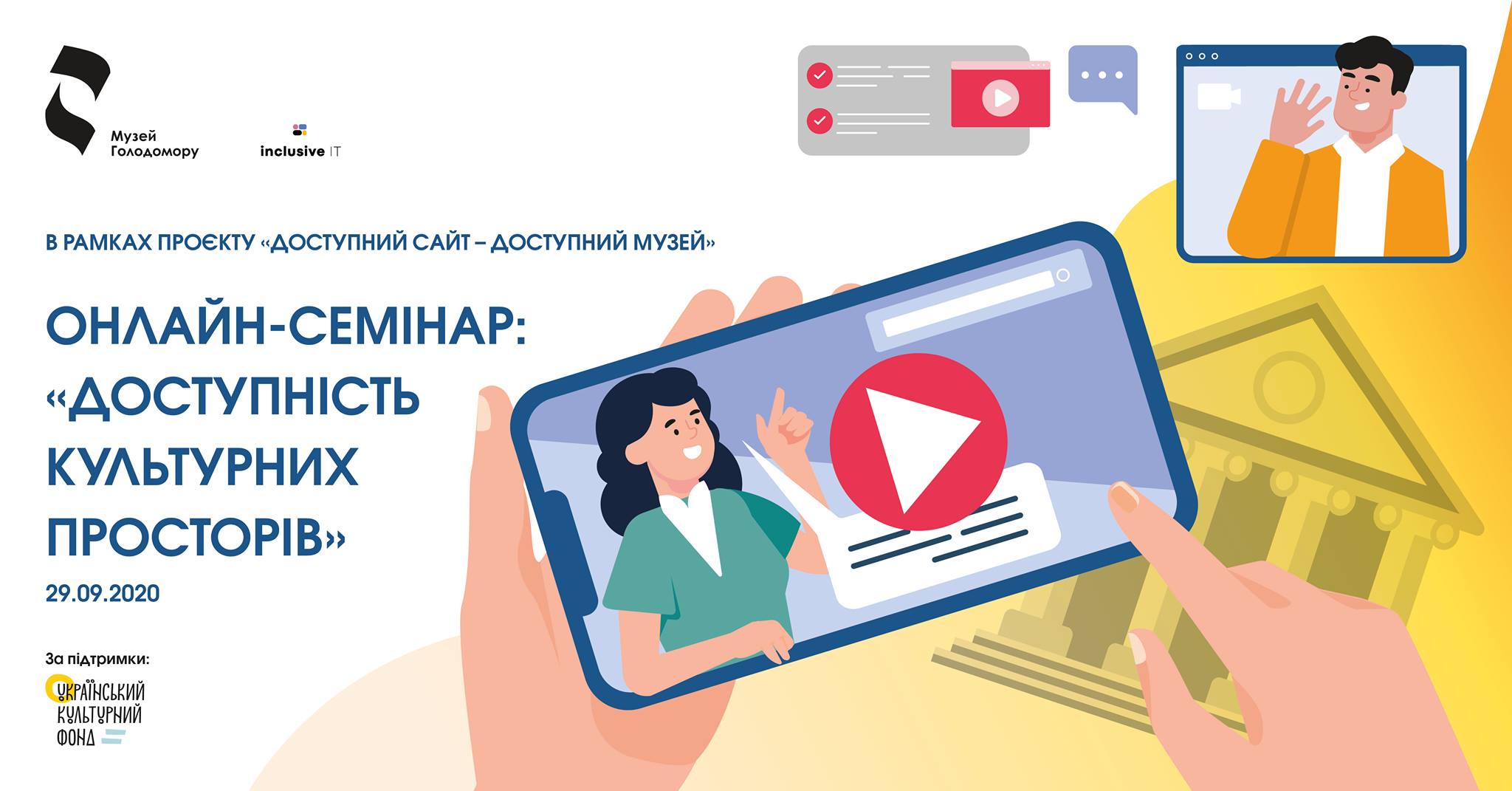 On September 29, a workshop entitled “Accessibility of Cultural Spaces” was held as part of the Holodomor Museum project “Accessible site — accessible museum” implemented with the support of Ukrainian Cultural Foundation. The seminar was attended by representatives of museums, libraries, art centers, NGOs, as well as anyone interested in accessibility.

77 participants. 14 speakers. 3 hours of exchange of experience and knowledge.

Inclusion in culture is a wide range of issues, some of which were analyzed by our speakers, talking about the experience of the institution they represent, or about their own experience.

You will soon be able to watch the video of the seminar on the museum’s Youtube channel. In addition, the “Accessibility” list on our Youtube includes videos that the speakers of the seminar recorded before the online event.

Hanna Rudyk, Deputy Director General for Education and Communications of the Khanenko Museum, spoke about the inclusive design of texts, in particular, when creating museum labels, booklets, posters and websites.

Architectural accessibility and adaptation of museum spaces for people with various disabilities and other excluded groups were the topics of speeches by Andrii Bryzhuk, Deputy Director for Research of the State Historical and Cultural Reserve of Ostroh, and Taras Rak, senior researcher at the Lviv Historical Museum.

Kateryna Makarova, on the basis of the inclusive work of the Art Arsenal team, emphasized the need to treat the inclusive direction in the work of a cultural institution as a priority, involving all departments in its work.

An interesting area of ​​inclusion, namely the expansion of the audience of cultural institutions by parents with infants, which has recently become known as the “Cultural Decret”, was highlighted  by Sofiia Riabchuk, head of educational programs of the Art Arsenal.

Anna Lukasevych, head of the NGO “IUS”, shared her experience of creating an inclusive educational space “Sensoteka” on the basis of the Lviv Public Library, which promotes the integration of people with disabilities into society.

Anastasiia and Tetiana Struk from the Linguistic Center translation company told us about the need to actively involve the translation community in the development of inclusion, namely the creation of titles in different languages, sign language translation, audio description, creation of texts in easy language.

Vira Shcherbina, representing the NGO “Active Rehabilitation Group”, spoke about the importance of culture for the socialization of people with disabilities on the example of implemented inclusive projects in the field of culture.

An inclusive direction cannot be developed without the involvement of people, for whom, in fact, such work is carried out. Therefore, we are grateful to Andrii Zelinskyi, a scholar, candidate of historical sciences, who has a visual disability, for his experience as a user of museum sites and museum products, which he shared with the participants of the seminar.

Galyna Golubeva told about the implementation of inclusive projects of the Holodomor Museum, namely “Touch the Memory” (developing a tour and educational activities for visually impaired visitors) and “Accessible site — accessible museum” (adaptation of the official website of the museum in accordance with international web accessibility requirements). National Museum of the Holodomor Genocide, coordinator of the project “Accessible site — accessible museum”) and Roman Borenko, head of the team of testers Inclusive IT, who leads the work on the adaptation of the site.

The seminar was held within the framework of the project “Affordable site — accessible museum” with the support of the Ukrainian Cultural Foundation.

You can learn more about the adaptation work at the National Museum of the Holodomor Genocide on our website in the “Accessibility” tab. This year, the museum team is working on two projects that will make our space more inclusive.