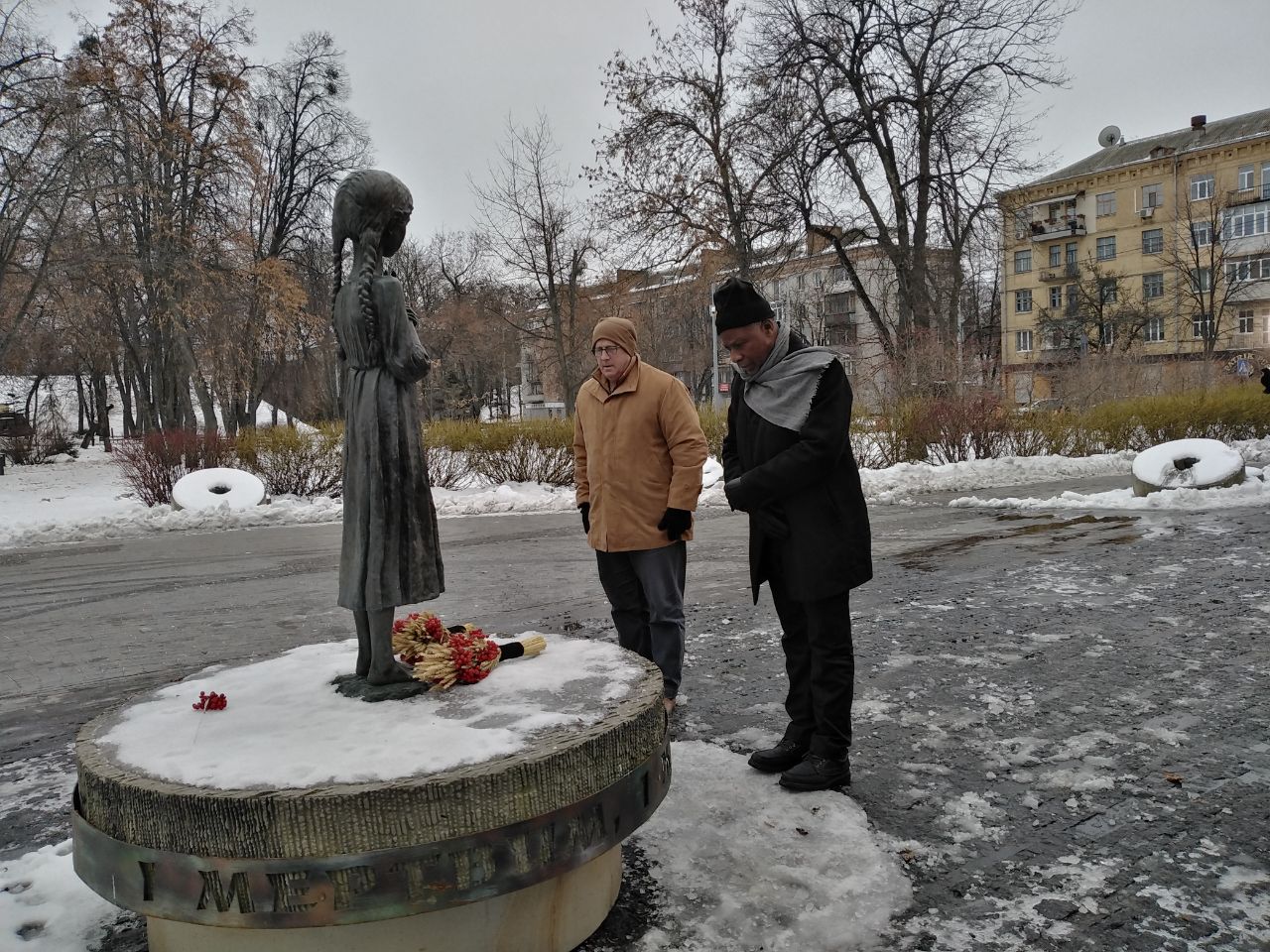 An archbishop from South Africa visited the Holodomor Museum

Archbishop of the Anglican Church from South Africa Thabo Makgoba, who is on a short visit to Ukraine, visited the Holodomor Museum.

Mr Makgoba honoured the memory of Ukrainians killed by famine near the sculpture “Bitter Memory of Childhood”. Then, he laid a decorative composition of ears of grain and viburnum and read a prayer. After that Mr Makgoba went down to the Hall of Memory of the museum, where he lit a candle in the Altar of Memory. Later, the guest listened to a tour in English to learn more about the Holodomor genocide of 1932-1933 in Ukraine.

Archbishop Thabo Makgoba is one of the most influential Anglican clerics in South Africa and the youngest ever elected Archbishop of Cape Town (South Africa). He is a follower and de facto successor of Archbishop Desmond Tutu, South Africa’s greatest spiritual leader and Nelson Mandela’s associate. Archbishop Makgoba is known for his progressive and open views. After the Russian invasion of Ukraine, Thabo Makgoba openly condemned Russian aggression in Ukraine. Thus, on the 2nd of March, 2022, during the service in St. George’s cathedral, on the occasion of the beginning of Great Lent, the archbishop called on the government of South Africa to condemn Russia’s invasion of Ukraine and reminded that the invasion is a “gross violation” of Article 2.4 of the UN Charter. “After all the support the UN has given South Africa in the fight against apartheid, it is inconceivable that we should condone such a flagrant violation of a fundamental principle of the UN Charter,” the archbishop said. Later, the archbishop repeatedly called on the authorities of the Republic of South Africa to strongly and unequivocally condemn the Russian invasion and bombing of Ukraine and also expressed his dismay at the fact that the Republic of South Africa’s authorities “silence on the horrific bombing of health facilities and civilians in Ukraine.”

The official authorities of the South African Republic show feigned neutrality regarding Russia’s war against Ukraine. However, this neutrality aims to support the aggressor country. Unlike the official authorities, civil society and opinion leaders in South Africa are on the side of Ukraine and condemn the actions of Russia. One of the most influential groups in South Africa is the clergy, in particular, the Church of England.

The archbishop’s trip to Ukraine is a research visit with the aim of “seeing first hand the terrible consequences of Russian aggression, hearing the eyewitnesses’ testimonies about the suffering and horrors experienced by the Ukrainian people due to Russian aggression.” According to the archbishop, similar crimes (like apartheid in Africa and the Holodomor in Ukraine, and currently military aggression) should not and cannot go unpunished. Russia, as a terrorist country, must bear full responsibility for its crimes. Africa and Ukraine can and should unite their efforts in the search for historical truth and restoration of justice.

To delve deeper into the subject of the Holodomor, Thabo Makgoba and the people accompanying him, received thematic literature in English.

Mr Makgoba was thankful for the meaningful tour and emphasised that there are clear parallels between the events of 1932-1933 and the current war. Therefore, the world must unite and respond appropriately to Russia’s aggressive actions.

As a result of the visit, the archbishop plans to make the topic of the war in Ukraine the central theme of his Christmas speech.