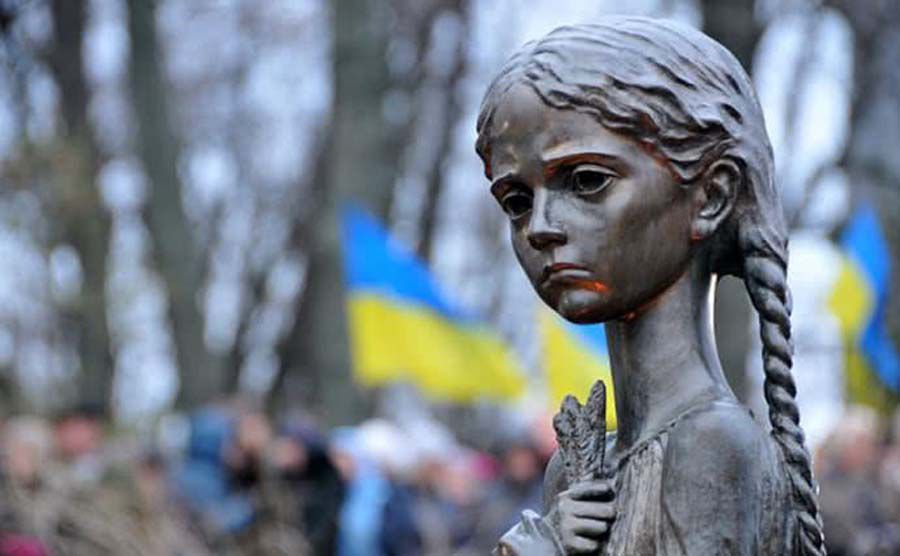 Article "On Cooking Tastes of Soviet Cinema instead of Serious Conversation about the Great Tragedy of Ukrainians" by Professor Volodymyr SergiychukThe original documents of the Ukrainian archives testify both directly and indirectly: the losses

The original documents of the Ukrainian archives testify both directly and indirectly: the losses during the Holodomor really are at least seven million, and the final number still needs to be established.

This has already been emphasized at conferences or symposiums organized by the Ukrainian Research and Education Center for the Holodomor Study (Hrec in Ukraine) sponsored by the Canadian patron of Ukrainian descent, James Temerty. However, this information is not clear to the large public, as the materials of these scientific collections have not yet been published.

Only the participants of the international scientific symposium “The Epoch of Holodomor in the Language and Conceptual Landscape of the World,” which the above-mentioned institution organized in Kyiv, are lucky with publications of their works. Its program did not foresee a discussion about the loss of Ukrainians in 1932–1933.

However, the organizers have planned special sessions on the themes “New academic knowledge, interdisciplinary connections, innovative methods in teaching the topic of the Holodomor: how it works” and “Teaching on the Holodomor-genocide of the Ukrainian people in the secondary and higher schools: new content of modern education.” Thai is why the author of these lines considered that the topic “Mortality of 1924–1934 in the Ukrainian SSR as a source for studying the genocidal features of the Holodomor of 1932–1933” would also be relevant.

However, the organizers of the symposium rejected the topic, arguing that the issue of counting the Holodomor victims would not be discussed.

Indeed, during two days of the symposium, there was no mention of the number of victims neither in the speeches of scholars, nor in the improvised school lesson. For example, there was a report entitled “Understanding and Speaking out the Holodomor Trauma in the Testimonies Collected for the US Congress on the Ukrainian Famine: From Traumatic Memory through ‘Knowing How’ to ‘Knowing what’,” where dozens of times the word “trauma” was repeated. Nevertheless, which exactly it was for Ukrainians – there was not even a single word.

What was it spoken about? About fiction about the Holodomor, about an attack on the Ukrainian language at that time…

But there were unexpected innovations that were not related to the stated program directions of the symposium. For example, how is the information on the culinary tastes of the Soviet clown, Yuri Nikulin, in the film Diamond Hand, related to the problems of symposium? But such a report was made by the venerable doctor of historical sciences: “Traumatic” Food in the Late Soviet Cinema (mid-1960s –mid-1980s.”

The topic, proposed by the guest from Poland, “Donbas Discourse in the Movies of Dzyha Vertov, Ihor Minaev and Serhiii Loznytsia,” is not also relevant for the symposium. Did Vertov show the hungry Ukrainian farmers who were not taken on Donbas mines, while delivering labor from Russia and Belarus?

In the end, the analysis of various Hrec in Ukraine events shows that this institution is trying to avoid really important for the Ukrainian historical science issues towards the Holodomor of 1932–1933. Therefore, it rejected the speech proposed because it refutes the attempts of individual scholars not only to diminish the quantitative losses of the 1932–1933 Holodomor, but also to erase its genocidal character, which is manifested, for example, by including 1934 to its chronological framework and the creation of the myth of the famine of 1928–1929 years in the Ukrainian SSR.

The fact is that, besides the Bolshevik authorities’ directive documents, which fall under the definition of the Holodomor of 1932–1933 as genocide, the death rate in the USSR in 1924–1934 is an important confirmation of these criminal actions. On the basis of comparative analysis, it is possible to show its sharp growth already in 1932 and catastrophic increase in 1933.

This trend could be also observed in the Pereyaslavskyi district of Kyiv, Pervomaiskyi district of Mykolaiiv region, Krynychanskyi district of Dnipropetrovsk region, as well as in other oblasts, where records of acts of civil status are preserved. Therefore, the introduction of “black boards,” seizure of food, a ban on crossing the border, the information blockade of the Holodomor and the denial of Western food aid turned into huge losses in 1932–1933 in Ukraine.

The table above clearly indicates that there was no huge mortality in 1934. Moreover, many records of mortality this year concern 1933. And this tendency is observed throughout Ukraine. For example, the death registration book of the Ahaiman village council in the Nyzhniosirohodskyi district of Kherson region for 1934 recorded: out of 87 records, 55 are dated by 1933.

The analysis of the comparative tables of mortality in 1924–1934, in addition, highlights such an unexpected context: how they reflect the picture recently introduced in Ukrainian historiography new concept of 1928–1929 famine. Data on mortality in different regions of the Ukrainian SSR do not show a sharp increase in 1928–1929, as it was in 1932–1933. On the contrary, in the vast majority of these indicators in 1928–1929 are smaller in comparison with the previous or subsequent years.

Here is a comparison table created by Academician Mykhailo Ptukha in his essay “Essays on the History of Demography in Ukraine (Study of Mortality in the USSR in 1917–1932),” which refers to the experiments of such authoritative researcher as Y. Korchak-Chepurkivskyi (see Table No. 2).

Thus, the mortality statistics in the USSR in 1924–1934 provide an opportunity, on the basis of a comparative analysis, to obtain extremely important conclusions regarding the Holodomor of 1932–1933. It is dangerous to neglect them in teaching the topic of the Holodomor, the genocide of the Ukrainian nation, especially by such an institution as Hrec in Ukraine.

And one more thing: recently, the Ukrainian diaspora in Canada has organized special bus routes that visit different regions of the country, popularizing the issues of the 1932–1933 Holodomor. Good thing, of course. But on the question of tourists, what are the losses of Ukrainians during this catastrophe, the organizers answer “Millions.” And there is no answer how many of these millions exactly were.

That is, let other people count every innocently killed representative of their nation, and then we, looking around, will humble our eyes, shyly speaking about unidentified millions.

It seems that together with Hrec in Ukraine, this Canadian bus moved to Ukraine.

This article was published on the Internet resource of the newspaper “Holos Ukrainy” on June 22, 2019.