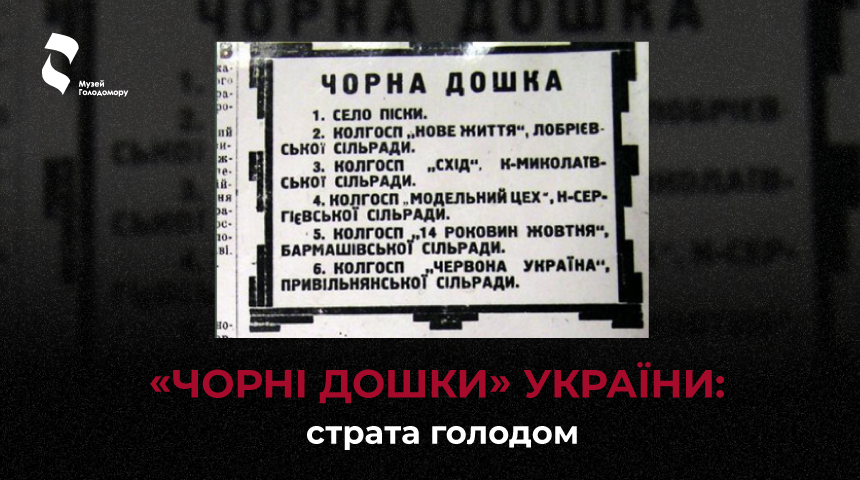 On December 6, 1932, i.e. 90 years ago, the Bolshevik occupation government of Ukraine adopted a resolution “On blacklisting villages that maliciously sabotage grain procurement.” In the punitive and repressive arsenal of the party-Soviet bodies, there were more than a hundred such resolutions only during the Holodomor years. They testify to the political and normative-administrative mechanism of the grain procurement policy, that is, deliberate actions to systematically deprive the farmers of bread, property, food, social isolation and terror by hunger.

For 15 years after the October coup of 1917, the totalitarian Bolshevik regime consistently destroyed the foundations of the socio-cultural identity, state-political self-determination and spirituality of Ukrainians. The Russian occupying forces destroyed the Ukrainian People’s Republic, which was a completely legitimate state of the Ukrainian people, killed 3.5 million farmers in Lenin’s genocide in 1921–1923, and nationalized industrial enterprises, subordinating them to allied trusts. Moreover, in January 1928, introduced Stalin’s grain distribution, which turned into another famine at the end of the 20s. Lenin’s NEP did not rule out economic terror, so the revolutionary tribunals punished Ukrainian farmers for evading natural service – the so-called tax in kind. Ukrainian villages were cordoned off by troops who ensured the criminal activities of the food detachments, the mass seizure of bread and its shipment to Russia. War communism, prodrazverstka, confiscation, tax in kind, barrage detachments, the institution of hostages – all this was introduced in Ukraine by the Russian Bolsheviks. Export of arbitrariness and social class hatred, political terror and systemic extraction of resources.

The ominous action of “black boards” was tested in Ukraine in January 1928 during the stay of Stalin’s emissary and member of the Politburo of the Central Committee of the CPSU(b) V. Molotov. He encouraged using forms of economic and outright physical terror against farmers. The phrase and phenomenon of “blacklisting malicious bread keepers” appear in the report of the Izium District Executive Committee in Kharkiv Oblast in January 1928. It testifies to the use by the state authority of the method of economic terror against certain social strata of the village. There were similar definitions in other reports.

The combined regime of “black boards” meant a combination of individual (for individual social groups) and group forms of terror (for villages, village councils, and districts). The harvest of 1931 became truly sorrowful. On August 28, the Kramatorsk District Executive Committee surrounded 6 rural councils with “black boards” for “inaction and opportunistic backlog in grain procurement.” Steelworkers and miners were provided with bread cards, and farmers were starved to death in social reservations, which became villages that were declared blacklisted. The union of workers and farmers turned out to be strange: the class distribution of death. In March-June, September and November 1932, judging by the local press, the villages of Bilovodsky, Starobilsky, Troitsky, and Kadievsky districts of the Donetsk region appeared to be “blacklisted”. As of December 2, that is, a few days before the appearance of the all-Ukrainian “black board”, 12 collective farms, 2 village councils, 6 villages, and peasant farms in 25 villages experienced food and commodity isolation.

The resolution of December 6 had clear signs of state-political terror because it was adopted by the Politburo of the Central Committee of the CP(b)U and the Soviet People’s Committee of the UkrSSR. It called to “break the sabotage of grain procurement, organized by kulaks and counter-revolutionary elements.” The phrase “break sabotage” looks like a call for mass repression aimed at seizing bread, food, and property from farmers.The order of the party body appears to be an obvious intention to use the criminal actions outlined in the document: to “destroy the resistance” and “eliminate” all kinds of “saboteurs.” Six villages were isolated, which became memorial symbols of the terror of hunger: the villages of Verbka and Havrylivka of the Dnipropetrovsk region, Liutenka and Kamiani Potoky of the Kharkiv region, Sviatotroitske and Pisky of the Odesa region.The worker-farmer government, which demagogically declared the principles of social equality, used weapons of mass destruction by food and administrative isolation of farmers. In the mentioned villages, they immediately prohibited any trade, removed all goods from the shops, cancelled their supply, and resorted to the “purification” of collective farms and village councils from “foreign and hostile elements.” The political call for a “merciless fight against the kulaks and their henchmen” meant the government’s readiness for specific physical terror.

Torn and weakened by “black boards”, the Ukrainian village quietly died. According to the historian Heorhii Papakin’s incomplete calculations, “black boards” covered 252 districts out of 405 in the UkrSSR, that is, the majority. In addition to the mentioned districts, 996 administrative and economic subjects became the victims of the terrorist action. They were deliberately deprived not only of food and money but the right to life too. In January 1933, farmers were forbidden to leave their villages for bread to other republics and regions. Black flags hung in starving villages to warn of a typhus epidemic.

The combination of all-Ukrainian and district “black boards” testifies to the existence of systematic and continuous terror against large groups of the village population. The geography and intensity of this punitive and repressive action against Ukrainian farmers, who are called to give life to people by growing rye and wheat, are impressive. The Bolshevik ideology of social chauvinism did not take such circumstances into account. In the Kremlin, Ukraine has long been considered the All-Union bread storehouse and the “granary of Europe”, although the production of bread in the USSR has “fallen behind” compared to the USA and European countries.

The combination of all-Ukrainian and district “black boards” testifies to the existence of systematic and continuous terror against large groups of the village population. The geography and intensity of this punitive and repressive action against Ukrainian farmers, who are called to give life to people by growing rye and wheat, are impressive. The Bolshevik ideology of social chauvinism did not take such circumstances into account. In the Kremlin, Ukraine was considered the All-Union bread storehouse and the “granary of Europe”, although the production of bread in the USSR “fell behind” compared to the USA and European countries.

The use of the “black boards” regime pursued an economic, financial and political goal: the systematic extraction of grain for export and provision of cities and the government, overcoming the resistance of Ukrainian peasants through their social isolation, physically “destroying” the wealthy groups of the village. It is no coincidence that the active use of this punitive and repressive form fell during the Holodomor years. “Black boards” are a memorial symbol of the terror of hunger, because more than half of the rural population, based on H. Papakin’s calculations, i.e. more than 12 million people, suffered various forms of damage (exhaustion, complete exhaustion, starvation colitis, non-protein oedema, chronic diseases, mental disorders and cannibalism, death). Bolshevik “black boards” can be considered physical torture through deliberately organized starvation.