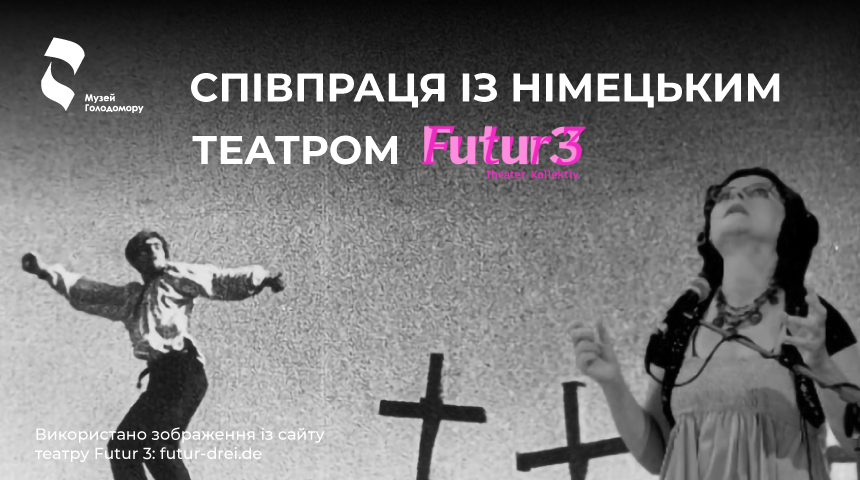 Cooperation with the German theatre Futur3

The Holodomor Museum provided expert advice to the German theatre Futur3, which is working on staging a play about the Holodomor in Ukraine. Dmytro Bilyi, a doctor of historical sciences, professor, and head of the historical research department of the Holodomor Research Institute advised the German artists. The meeting took place in the format of a Zoom conference.

“Revolution starves its children” – that’s the name of the play, which will be seen by the German audience already in November of this year.

“In 1932-1933, one of the greatest humanitarian disasters of the 20th century took place: the Holodomor (killing by hunger) is a little-known crime of the Soviet Union in Ukraine, during which several million people died of hunger,” says the site of the theatre about the historical context those events.

It is pleasant to realize that the understanding of the theme of the Holodomor by the German artists involved in the work of the performance is clear and deep. After all, one of the authors of the production is the Ukrainian director Pavlo Yurov, who was born in Antratsyt in the Luhansk region, which is currently under Russian occupation. The idea of such cooperation with the Holodomor Museum belongs to him.

During the consultation, the German theatregoers were interested in when it became possible to talk about the Holodomor and research it; how the truth about those events was spread, what documents testifying to the crime of the Soviet regime have saved to our time, what consequences and traumas this tragedy caused to the Ukrainian nation and the following generations of Ukrainians. Also, representatives of the German side were interested in the testimonies of eyewitnesses and what exactly they told about those terrible events in the family of Dmytro Bilyi.

“My mother’s family lived in the Kuban, which was inhabited by ethnic Ukrainians. This territory also suffered genocide. Only 6,000 of the 18,000 people in the village survived, Dmytro Bilyi said. — My mother’s family managed to leave the territory of the Kuban, where she lived. But when they returned in 1934, they saw how in some houses whole families were dead. And the activists who carried out the Holodomor took the remains of corpses out of houses with rakes and buried them. Later, Russians came to these settlements and settled in empty houses. Mom was very surprised: “How can you come to a house where dead people were lying recently, and live in houses whose owners have just died a terrible death!” My uncle, who was three and a half years old, was sitting under the house, picking clay from the wall, eating and constantly repeating: “I want bread.” He never survived… Mom hated the Soviet government and talked a lot about that time, especially when I had already become a student of the history faculty and was old enough to keep my mouth shut so as not to accidentally talk about a forbidden topic…”.

Also, the performance directors of the play were interested in the documents of the Holodomor period because, according to the authors’ idea, they are an essential component of the stage action. Dmytro Bilyi reminded us that a large part of such documents is still in Russian archives, which are “top secret”. After all, the Russian Federation continues to deny the Holodomor as genocide and hides the truth about it. This fact complicates the study of the topic by Ukrainian scientists.

The German artists thanked the Holodomor Museum for organizing the meeting and a fruitful conversation with the Ukrainian historian, which allowed them to gain a deeper understanding of the events of the Holodomor of 1932-1933.

In the future, the theatre intends to show the play “The Revolution Starves Its Children” not only in Germany but in the West too so that more people learn about the tragedy of Ukrainians. The theatre troupe also plans to bring this production to Ukraine.

Theater Futur3 is an independent theatre operating in the city of Cologne. It was founded in 2003. A feature of theatre performances is that the audience is usually a participant in the productions and dialogue with the actors. The topics that interest Futur3 always have a political undertone: war, history, unemployment, homelessness, utopias, etc.