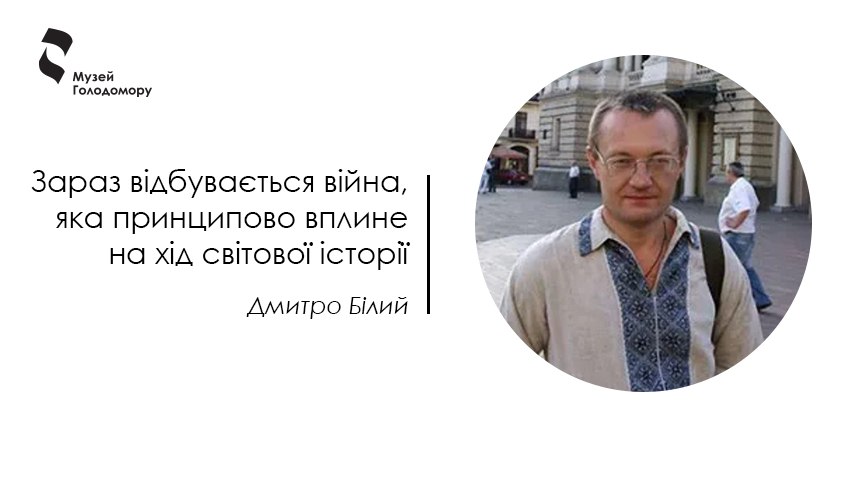 Historian Dmytro Bilyi: This year we will see how the Russian Federation collapses

Dmytro Bilyi – Doctor of Historical Sciences, Professor, Head of the Department of Historical Research of the Holodomor Research Institute. With his works on the history of Ukrainians in the Kuban, the scholar debunks the myths of Putin’s propaganda. Dmytro Bilyi “got acquainted” with the “Russian peace” in 2014 when he was forced to leave his native home in Donetsk, but he is convinced of the victory of Ukraine and Ukrainians.

Please tell us where you lived in eastern Ukraine before moving to Kyiv. What was that life?

Since my student years, I took part in the Ukrainian national movement; in 1989, I founded the Kurin Historical and Ethnographic Society with friends, cooperated with Prosvita, was a member of the Ukrainian Cossacks, was in Kyiv on the Maidan during the Orange Revolution, and the Revolution of Dignity.

I wrote several fiction novels on historical themes. They seem to have some popularity. I saw with my own eyes how our nation is gradually strengthening. I am glad that I joined this strengthening.

If you remember, how did the war in the East start for you?

“I remember very well.” It cannot be forgotten. In fact, as soon as Ukraine became independent, I did not doubt that there would be a war with Russia. So I wasn’t too surprised when they started it in 2014. However, this was not the phase of a full-scale war as it is now. At first there was hope that it would be possible to end that hybrid war. I went to all Ukrainian rallies in Donetsk, saw how everything happened.

The last hope was on May 26, 2014, when our troops completely defeated Russian mercenaries as they tried to seize the Donetsk airport. But, unfortunately, our Donetsk was not cleared then, and in three days new divisions of Russians arrived in the city. Then I told my wife that I had to leave.

In fact, every historian should know not so much the past as to predict the near future. So on May 30 we took the minimum necessary things and left for Lviv.

What stuck in your mind the most?

– I was very impressed by the high level of patriotism of a large number of Donbass residents. Unarmed people went to rallies against these destitute inhumans, died but did not obey.

Back in March, when I lived in Donetsk, I went as an instructor to training grounds in the Carpathians and near Kyiv, where young people from all over Ukraine gathered to undergo training to repel the enemies of Ukraine. We were already waiting for the great war. I lectured them, taught the basics of melee. I was also proud of the high level of patriotism of our youth. Many of my friends, students and cadets went to fight for Ukraine.

Was it difficult to leave your hometown? Why did you decide so?

– Before leaving, I did not hesitate for a second. I never thought of living under the occupation of our eternal enemies, especially since I had only one road left with my background and reputation as an active Ukrainian figure – “to the basement.” I am a historian and I know very well that their essence has not changed over the centuries, that they can only bring Chekist-Stalinist terror and complete ruin. In fact, it is the confrontation of two civilizations, two universes. And we will never be with them together.

Did you think that Russia would start a full-scale war in Ukraine?

– Yes, for the last thirty years I have never had any doubts about that. Russia cannot survive without Ukraine. They have neither Ukrainian human resources, nor intellectual, nor economic. Without us, they are doomed. In addition, Ukraine shows that it is possible to live wonderfully without Russia, that is, to live wonderfully without Russia. And, given that Russia, in fact, consists of conquered peoples – this is a great opportunity for them to demand their own independence from Moscow.

As a historian, how do you assess the actions of the Russian Federation? Is this war genocide? Is it possible to draw parallels with what happened in Ukraine in the 1930s?

They want to occupy Ukraine and introduce a system of unprecedented terror, but the Ukrainian nation is giving them a decent rebuff. In fact, there is a war going on that will fundamentally affect the world history course.

How do you think this war will end?

– Undoubtedly, the complete victory of Ukraine and the liberation of all temporarily occupied territories, including Crimea. Already this year, we will see the collapse of the Russian Federation, and their Fuhrer will go to where he has long been waiting for pitchforks and hot pans.