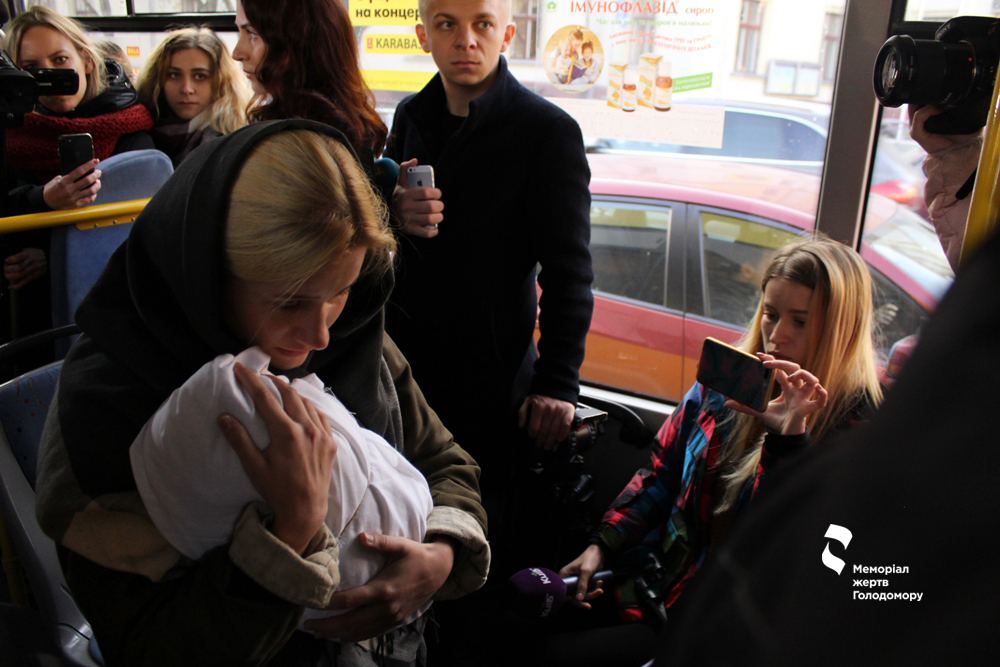 On November 9, 2018, the National Museum “Holodomor Victims Memorial”, together with the Kyiv theater studio “MIF” and the “Kyivpastrans” Communal Enterprise, with the support of the Ministry of Culture of Ukraine, presented the performance “The Roaming”, prepared to commemorate the 85th anniversary of Holodomor-genocide.

“The roaming” – is 5 people / destinies / stories from 1932-1933 that make an attempt of delicate intervention in our usual way of life. They come from the darkness of history to the present, during the days of the 85th anniversary of the crime of genocide – Holodomor. They tell about themselves, about what they have never said to anyone because they either died in a terrible 1933 or the authorities made them forget that terrible time, and threatened to kill them if at least one word of truth would be thrown into space. They roam, enter quietly the transport, in their poor scrolls, wrapped in hollow scarves, the only things remaining non-exchanged for food, and again return to the darkness. They are roaming, because not everyone is commemorated, not every name is yet written in the National Book of Memory of Holodomor victims, they were buried without Christian tradition, nobody cried after them and prayed for them. And that is why they are roaming, reminding us of our debt.

The idea of ​​the museum workers was realized thanks to the cooperation of the museum with the Kyiv theater studio “MIF” (founder and artistic director of which is Oleksandra Kravchenko). The actors are students of the Taras Shevchenko National University of Kyiv. Due to the fact that many actors are future historians, one of the most important goals of the young theater is to promote the Ukrainian national idea.

The basis of the script was the testimony of eyewitnesses of the Holodomor from the archives of the Holodomor Victims Memorial and published testimonies from the book “33rd: The Starvation. People’s Book-Memorial “(authors-compilers L. Kovalenko and V. Maniak).

Olesia Stasiuk, Director General of National Museum “Holodomor Victims Memorial”: “Every passenger will be able to feel these personal stories, to “get into” into history. That is why we chose such form of art as a performance. “The roaming” will remind the audience of the obligation to remember and honor the memory of those killed by the genocide of the 30s, the number of whom is at least 7 million”.

Actors will show the young woman who exchanged the jewelry at Torgsin for food; a woman who was mad about having buried two children who died from starvation; a teenage girl who lost her family and was in a boarding school where she escaped from hunger; a member of the “tow-team”, a teacher, with a notebook that was taken to record the property of those searched; and well-known British journalist Gareth Jones.