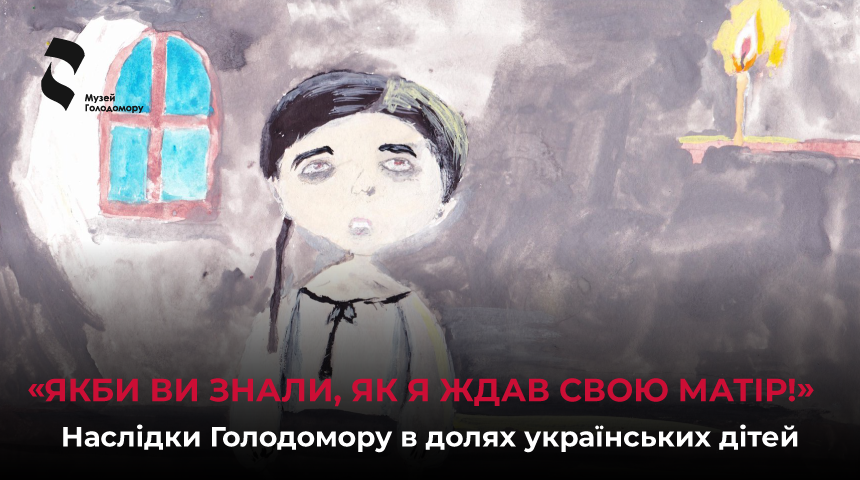 “If you only knew how I was waiting for my mother!”: The consequences of the Holodomor in the fate of Ukrainian children.

Modern humanitarian knowledge recognizes childhood as the starting point of a person’s life path, influences their biography and, therefore, the history of the society in which the child grows up. Both awareness and understanding of this influence create the possibility of resolving historical and social controversies. Of course, every phenomenon and event in history is the result of the interaction of numerous factors, but among them is the fact that the future of the country depends on the number of children in society, on the conditions of their socialization, upbringing, education, and mental health. Therefore, in order to understand the cultural genetic code on which the self-reproduction of a nation takes place, it is crucial to understand how it perceives and educates its children since it has an impact on all levels of the nation’s development. The knowledge of childhood cannot be separated from the history of the nation, because it is a part of it and a way of existence. So, the history of childhood is, in fact, the foundation of the history of the country. The memory of the subjective experience of being a child, in our opinion, determines the model of the adult’s behaviour in the modern world.

At the public level, public policy is constantly multiplying museums, libraries, archives and various forms of databases. However, the unbelievable decentralization of all instances of heritage has turned every dwelling and individual into an archive producer, a collector of their own existence with the help of family photographs and documents. Each person has actually become the archivist of their own identity.We will recall the story of one of our interviewees – Liubov Petrivna Reznik. Due to a number of life circumstances (at first, she lived in the Baby House in Zaporizhzhia, where her mother worked as a nurse, then her mother committed suicide, homelessness and begging, being sent to forced labour in Germany, then Soviet imprisonment due to a politically motivated sentence). For more than ten years, Liubov Petrivna tried to recreate her life story, turning to judicial and archival institutions, and collecting numerous references. The woman’s main goal was desire to establish the correct date of her birth. Trying to recover data about her birth and first years of life, she managed to establish some facts related to the operation of the infamous Baby House on the street Rosa Luxemburg, whose tragedy we have already mentioned several times, and our interviewee just added to our knowledge.

The multicolour of life’s vicissitudes is unpredictable. There were almost incredible cases when children from orphanages, children’s homes and other institutions who survived the Holodomor of 1932-1933, were found by their parents and had the opportunity to return to their families. Maria Tykhonivna Sydorenko, a Zaporizhian resident of a children’s shelter, who, due to life circumstances, ended up in a Zaporizhzhia baby home with her sister as an infant (the girls’ father was arrested, and their mother tried to take them to Zaporizhzhia, in the hope that they would find an opportunity to feed themselves there, the relatives refused the girls and simply left them in the market), told about their father was released from prison in 1934. He found out where his children were through his relatives. He was searching for the Baby’s House. In order to find his daughters, he asked to bring out all the girls named Nina and Maria. But he did not recognize his daughters. Neither did they… On the way back, the man started coughing, and by this characteristic cough (her father always had it), Maria recognized him. Throwing her arms around her father’s neck and crying: “Dad! Dad!” she said about the death of her younger sister Nina. [1]

However, happy endings were few and far between… They became dreams and hopes for other children that their parents would come to the shelter for them. For most of the children in orphanages, it remained a vain hope…

Ivan Maisky, who himself ended up in an orphanage in Bogodukhov, described the events of the end of 1933 and the beginning of 1934 as follows: “And after a few months, mothers started coming to the orphanage. Children recognized them and cried. Women – to the authorities: give the children, thank you for having fed them, thank you for not having let them die… And those children were sent home. If you only knew how I was waiting for my mother! No, she didn’t come…” [2] There was no miracle in the fate of Ivan Maisky: his mother, most likely, did not survive. There are tens of thousands of people like him – abandoned orphans. They survived, but the famine years were imprinted in their memory so strongly that they still painfully talk about their childhood and youth.

There were other situations. According to the recollections of Maria Stepanivna Serhiienko from Myrhorod, their neighbour took the children to the local shelter. When she returned to pick them up, the children were gone: either they moved or, most likely, did not survive. Of course, there was a possibility of adopting children and giving them the new parents’ surnames. However, this is rather a ghostly illusion. Because millions of children died, shelters during the Holodomor turned into conveyor belts for child death.

Finding a child in a shelter was not easy. So, when a mother tried to find her child, she turned to Okhmatdyt, asking for help. Okhmatdyt applied to all sub-departmental orphanages of the region. So the boy was found. He ended up in the Lebedyn shelter, and it was reported to his mother. This woman managed to find her son and bring him back. However, let us emphasize that most children remained orphans who could never return to their families. For example, Volodymyr Danka’s mother appealed to all party institutions to help her find her child. To all her pleas and requests, she received a short answer from the Kharkiv Regional Executive Committee: “…it is not listed in the file register…”. [3]

According to the memories of Vira Sudaryk from Pereiaslav, when children were dropped off at the orphanage, they attached notes with their names and date of birth to their hands. However, if the child’s surname was unknown, then instead of it, they called “unknown” and gave the number. And at school, such children did not have a surname but were called “unknown” and a number. As soon as such children reached the appropriate age, they were given passports and assigned surnames.[4]

Far from always, parents who returned to orphanages for their children could pick them up. Here is an excerpt from the testimony of Dzhun Maria Mykolaivna, born in the village of Dzhun in the Poltava region.“The parents returned after three months and found only the grandmother in the house, chubby, without a crumb of bread. She gave Andriyko to the Lychansky shelter a month ago, when she felt that her strength was leaving her. Father did not wait till the morning but late in the evening, taking a few crackers in his bag, he left the village for the children’s shelter. Apart from the nanny, no one from the service was there that night and, of course, he did not receive permission to take his son home but the nanny helped dad find Andriiko among the sleeping children. There was no limit to the joy, the thin body of the son clung to his father. Dad gave the hungry child a cracker, asked the nanny where the director lived and hurried to his apartment. But he didn’t find him at home, he stayed to wait until morning. In the morning, the father appeared at the shelter together with the director, but it was too late. The nanny said that Andriyko was crying, writhing in pain, calling for dad, and then he fell silent forever. At the place where Andriyko was lying, they found an empty bag, which the father, in a hurry, forgot next to his son. The father, hearing about the death of his son, fainted, he was taken to the hospital, where he was treated for a long time. Andriyko was buried in a mass grave together with the children who died that night.” [5]

People who survived the Holodomor in childhood have this tragedy imprinted in their memory forever. However, the conditions of the totalitarian communist state made it impossible to tell the truth or to mention the Holodomor in general. People kept the memory of the disaster without being able to talk about it out loud. Those who dared, such as General Petro Hryhorenko, were persecuted and tortured. Most people who survived the Holodomor as children tried not to tell their children about the tragedy for a long time. However, in Ukrainian families, a thrifty attitude to bread, and things and an effort to make certain stocks and savings were imprinted over the years. In the 1980s, people who survived the Holodomor as children gradually passed on the memory of those years to their grandchildren and told about a terrible famine, mass arrests, persecution and forced transfer to collective farms. At the same time, grandparents warned them not to talk about it at school or in public. [6] In this way, people’s memory did not allow the Holodomor to be forgotten.

Genocide continues to affect people’s lives even after its ending. It manifests itself in the form of trauma, grief and disharmony experienced by both the immediate witnesses and victims who managed to survive and the descendants in the second or third generation of those who survived.

Therefore, it is extremely hard for those who survived the genocide to realise it. The Holodomor caused transgenerational trauma. The consequences of that trauma were passed on to the descendants. It manifested itself in different ways: a focus on survival, the need to adapt, risk avoidance and the “Stockholm syndrome” when victims experience a traumatic connection with their abusers.

[6] This conclusion is a personal experience.

senior researcher of the department of historical research

of the “Holodomor Research Institute” branch

senior researcher of the department of historical research

of the “Holodomor Research Institute” branch