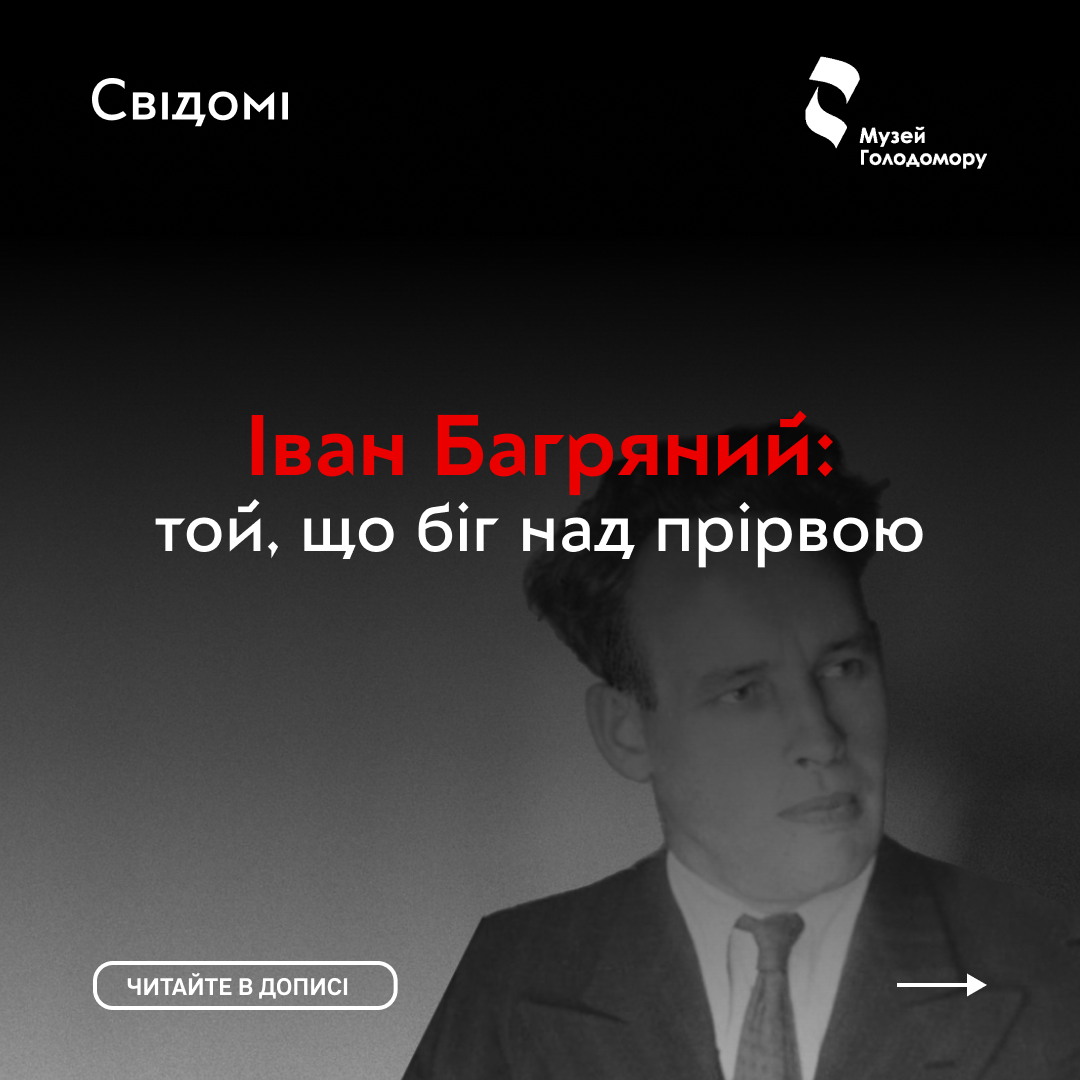 Ivan Bahrianyi: the one who was running over the abyss

In cooperation with the Holodomor Museum, “Svidomi_ua” continues to talk about prominent figures of the Ukrainization period.

Poet, writer, and publicist Ivan Bahrianyi was lucky – twice he managed to leave the Soviet camps alive. Later, he was able to leave the USSR. In his homeland, his name was erased from memory for a long time. Only with the restoration of Ukraine’s independence Ivan Bahrianyi was able to return symbolically — he was rehabilitated in 1991, and his creative legacy finally began to be published and studied.

“I was still a little 10-year-old boy when the Bolsheviks invaded my consciousness with a bloody nightmare, acting as the executioners of my people, and it was 1920. He lived then with his grandfather in the village, at the apiary. Grandfather was 92 years old and was a one-armed cripple. Then one day, in the evening, some armed people came, speaking in a foreign language, and in front of my eyes and the eyes of other grandchildren, they killed him, and with him one son (and my uncle) under our frantic screams. They tortured my grandfather because he was a wealthy Ukrainian farmer (he owned 40 acres of land) and was against the “commune,” and my uncle because he was a soldier of the national army of the Ukrainian People’s Republic during the national liberation struggle in 1917-18. For fighting for the freedom and independence of his people,” Bahrianyi would later write in the pamphlet  “Why I am not going back to the Soviet Union.”

His second uncle, who escaped the massacre because he could escape, was later caught and exiled to Solovetsky islands, where he died. “Later, my whole family and I followed the same paths,” the writer noted.

In the meantime, the young man tried to survive in the misanthropic Bolshevik state. In his youth, he was a teacher – he had a talent for drawing, so he taught children. He even entered the Kyiv Art Institute but never finished it due to financial difficulties and political unreliability. Therefore, he often changed his place of work and worked in the mines of Donbas.

In 1925, in Kamianets-Podilskyi, he was an illustrator in the newspaper “Chervony Kordon,” where he printed his first poems. The same year, under the pseudonym I. Poliarnyi, he published a small collection: “Black Silhouettes: Five Stories” in Okhtyrka, in which he described the unattractive life in the “land of the Soviets.”

Ivan Bahrianyi was a member of the literary organization of Kyiv writers “MARS” (“Workshop of the revolutionary word”). In 1927, the first collection of poems “Do mezh zakazannyh”(To the limits ordered) was published, and in 1929 – the poem “Ave Maria,” was immediately forbidden by censorship. The historical novel in verse “Skelka” (1930) was accused of “carrying out counter-revolutionary agitation.”

With his works, Bahrianyi constantly maneuvers over the imaginary abyss where all those disloyal to the Bolshevik regime found themselves. On April 16, 1932, the writer was arrested, and after 11 months of imprisonment in the Kharkiv “internal prison,” was sent on a 5-year exile to the Far East.

In 1938, a second arrest and a new accusation: participation in a nationalist counter-revolutionary organization. In 1940 due to severe lung disease, the writer was released. And Ivan Bahrianyi wrote about the arrest, torture, and exile in the novel “Sad Hetsymanskyi” (“Garden of Gethsemane”) (1950).

During the Second World War, the poet managed to leave for Halychyna, where he wrote the novel “The Beast Hunters” (1944, republished in 1946-1947 under the title “The Tiger Hunters” ). Soon he emigrated to Slovakia, then Austria and Germany. Far from his homeland, Bahrianyi openly wrote about what hurt and worried him.

“In emigration, Ivan Bahrianyi showed great creative energy in a wide intellectual and civil range – as a poet, novelist, publicist, political thinker, and activist, organizer of political life,” Ivan Dziuba wrote about him. “One of the main themes of Ivan Bahrianyi’s work was exposing the system of Bolshevik terror, showing the cruel and insidious methods of work of punitive bodies – here he used the rich material of personal impressions.”

Writing a debunking of the Soviet Union, Bahrianyi again “runs over the abyss,” risking being destroyed by the KGB. Like the hero of his novel “A Man Runs Over the Abyss” (written in 1948-1949), who faces difficult questions of choice.

“Bolshevism is violence against people, it is slave labour, it is the tyranny of a political clique, it is the latest serfdom, it is physical and spiritual terror, it is poor, it is hunger, it is war,” the writer stated in “Why I am not going back to the Soviet Union.”

Today, Bolshevism has transformed into rashism, which seeks war and new violence against people and nations.