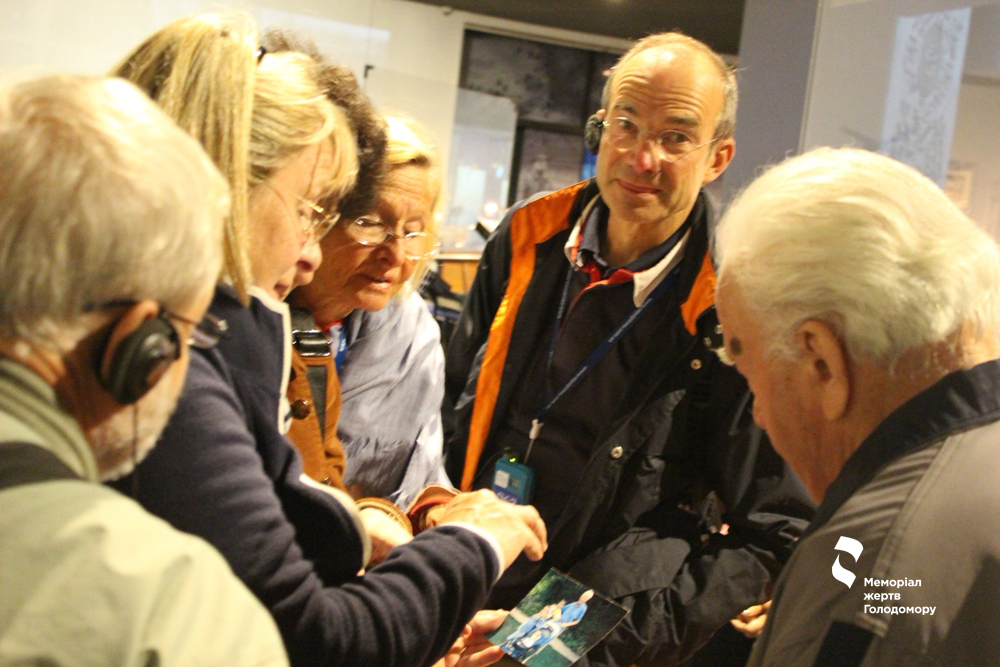 On September 26, 2018, a meeting with a person who survived the Holodomor-genocide was held at the National Museum Holodomor Victims’ Memorial. Vasyl Tsyba was born in 1927 in the village of Raygorodok, Koropsky district, Chernihiv region. With the introduction of the policy of collectivization, the life of Vasyl and his family dramatically changed. His family was attributed to the middle-class peasants (the division of society in the countryside in the USSR). In 1930, his father went to work in Russia. And in 1932, the family was evicted from their home and their property was confiscated. Vasyl was a 5-year-old child, as fear and famine broke out in his life. He forever remembered how he and his two brothers were hunting for hamsters: “There were always two holes, I stood on the one hole, and in the other I poured water, then I stood with a stick to hit.”

After the deportation, the family sought shelter, going to neighboring villages. So they reached the Desna. In one of the villages settled in a desolate building. Grandpa and grandmother went to the village to ask people for food for grandchildren. Granny got a knot of buckwheat. But immediately Committees of Poor Peasants collapsed into the yard and took away that knot. In search of salvation for children, the mother of Vasyl Tsyba agreed with a fellow-countryman who had a horse to have the child taken to her father. Then the mother and her grandfather sold earrings and wedding rings to the Torgsin and bought some flour. And Vasyl’s dad at this time sent from Leningrad dried rusks.

Later, the father sent the money on which the grandfather bought a goat. To a greater degree, thanks to this the family survived. Ivan Tsyba, father of Vasyl, returned to Ukraine in 1934. He took his family to Dneprodzerzhinsk (Kamensk). It was in this city that the family found salvation: Ivan settled down to work on a metallurgical factory, where lunches were given.

However, not all members of the Tsyba family survived. Cousin Uncle Stepan Tsyba was de-“kulak”ed and deported to Siberia with his wife and newborn son. The child died on the road. The couple buried a baby at the station Khilok, near Baikal.

Vasyl Tsyba shared memories of how the brothers were collecting spikes from the fields, which by the decision  from August 7, 1932, were declared as a state property. This rule severely punished the gathering of ears: imprisonment in concentration camps up to 10 years or execution. The peasants called this law “The Law About Five Ears”.

“Well, if they catch an adult, the sent him right to prison. So we sent children to the fields. One stood watch to look out of the village, when the rider would ride (they were watching), then let the sound be given. Then we were hiding somewhere in the bushes or in the ditches, but it was not visible to us. Oh, so we were collecting spikes, we were obliged to collect, otherwise we could not live,” Vasyl Tsyba recalls.

The meeting was attended by tourists from Switzerland. Guests visited the Holodomor Victims Memorial for the first. But for the first time they heard the story of the genocide of the Ukrainian nation of 1932-1933. They were embarrassed by the fact that Switzerland nation was not aware of this genocide. Visitors had the opportunity to hear this story from the words of an eyewitness and Holodomor victim and communicate with him.