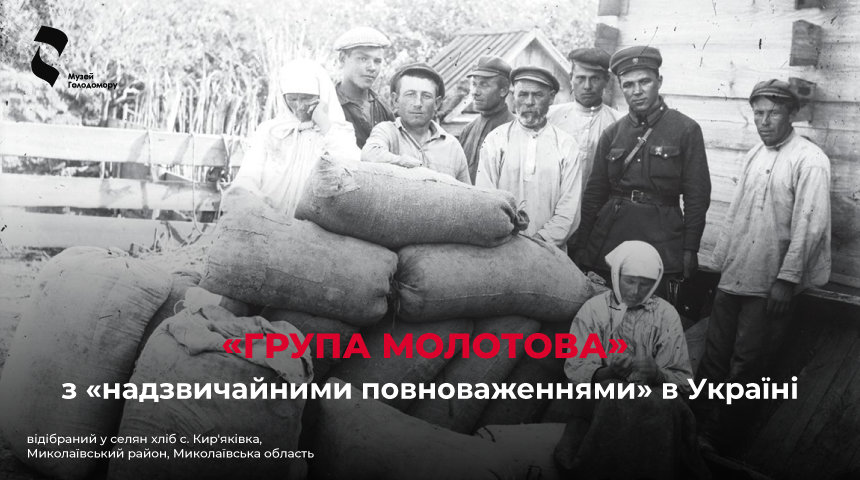 The phrase “Molotov Team” (“Molotov,” derived from the Russian word for hammer) was recorded in the resolution of the Politburo of the Central Committee of the All-Union Communist Party of Bolsheviks on October 22, 1932, that is, 90 years ago. Kalmanovich, Sarkis, Markevich and Krenzel were appointed assistants to the Stalinist Molotov team. They had the experience of forcibly seizing bread and food from farmers. Vyacheslav Skriabin also had it – Lenin and Stalin’s special envoy. It is sad, but he gained this terrible experience in Ukraine.

At the end of 1920, Lenin entrusted Molotov with monitoring the commission’s activities for studying food resources in Ukraine. By origin, V. Skriabin belonged to the burghers, and by education, he had nothing to do with agriculture. The party did not require agronomic knowledge from him because the task was different: to organize the mass export of Ukrainian bread. The Politburo of the RCP(b) appointed Molotov as the first secretary of the Central Committee of the CP(b)U, a position he held from November 1920 to March 1921. He complained about the lack of close cooperation with the Bolsheviks of Ukraine and considered himself an “inexperienced Ukrainian.” The years of his political activity in Ukraine coincided with the apogee and final chord of the military-communist assault in Ukraine. It was the Russian Bolsheviks, especially Lenin, who justified and brought to Ukrainian villages prodrazverstka, revitalization of grain procurement issues, the institution of hostages, barricading squads, emergency food squads, and as a result – the mass famine of the early 20s.

Lenin’s trust and his high political position stimulated the work of the hot-tempered party official, who was called a “steel ass” for his bureaucratic masochism. Molotov monitored the work of the “Popov Commission,” that is, a group of Russian statisticians who established plans for the production tax and later the production tax as if they were careful owners of their land. Since Ukraine was occupied, they behaved as if they were in Russia. The “Molotov-Popov” commission, taking into account the tandem of close cooperation, established the scope, norms and procedure for collecting 120 million poods of Ukrainian bread from the meagre harvest of 1921. Molotov personally demanded the government of Ukraine send 40 wagons with bread to Moscow in May 1921. Skriabin-Molotov was called to “scrape out” farmers’ bread.

On December 28, 1927, Molotov left for Ukraine to organize grain procurement. He received “extraordinary powers” from Politburo. On December 30, he demanded that the government of Ukraine urgently export 23 million poods of bread, that is, one pood from each farmer or 4.5 poods from a farmer’s yard. The Plenipotentiary Commissioner sat in a specific government train that circled like a black crow from Kharkiv to Melitopol, Zaporizhzhia, Kryvyi Rih, Poltava, and Kremenchuk. Local leaders were called to the wagon and demanded to carry out the plan. Molotov personally set the amount of grain procurement for Ukraine – 265 million poods, and suggested that it be “distributed” by districts and districts. He needed work experience in Ukraine in the early 1920s. Mercilessly fired managers who considered his actions “terror against the local procurement apparatus. “Stalin’s emissary then proposed to use the method of the period of “war communism”. That was the general rehearsal of the Holodomor, which in 1928–1929 was accompanied by local famine in the southern districts of Ukraine.

The criminal tandem of Stalin and Molotov, and sometimes L. Kaganovych joined them, destroyed the Ukrainian countryside, exhausted its food potential, and thus brought a national tragedy closer. In August 1930, Stalin advised Molotov to “Force the export of grain above all,” and even “furiously force the export of grain” since 5 million tons of Soviet grain exports could not compete with American exports.

Molotov’s permanent appointment as a “commissar,” that is, the head of some commission meant his direct participation in the organization of the Holodomor. On February 5, 1931, he supervised the activities of the grain procurement commission. On June 7, 1932, when a third of the regions of the UkrSSR were starving, the head of the Soviet People’s Committee of the USSR (the rank of prime minister) was appointed to be responsible for the harvest. They became a harvest of despair for the farmers in reality. Three Kremlin reapers (Stalin, Molotov, Kaganovych), as if they were selling their bread, planned to receive “foreign exchange revenue” from the trade operation – 620 million rubles. (over $300 million at the then exchange rate). Molotov’s signature remains on the resolution of the Central Executive Committee and the Council of People’s Commissars on the protection of socialist property of August 7, 1932. It had a sad and tragic reputation among the people – the law “on five ears of grain.” Farmers were injured, shot, and sent to camps for ten years. Their guilt was simple: they collected a few ears of grain from a collective farm field or started harvesting in their fields without the authorities’ permission… Stalin and Molotov were the two first persons in the USSR who brought the village to decline, died of hunger during the harvest, and instead offered the troops to participate in haymaking to prevent a social riot. The strange symbol of the scythe and rifle of the Red Army: a symbol of death from both sides.

Ninety years ago, the “Molotov team” trampled Ukrainian bread, sowing villages with farmers’ corpses exhausted from hunger. His team, or it was also called the “Molotov commission,” was active until November 7. It was engaged in preparations for the 15th anniversary of the October coup. On October 30, the Politburo of the Central Committee of the CP(b)U recognized the pace of grain procurement as unsatisfactory. Molotov, who attended the meeting, agreed to reduce the previous plan for Ukraine (510 million poods) by 70 million poods but demanded the undisputed fulfilment of the new task. It was simply overwhelming for the farmers. The gross harvest of grain, according to the estimate of the Central Central Bureau of the UкrSSR, reached 19.6 million tons at the time, and domestic consumption in Ukraine required 16.9 million tons. Therefore, Skriabin could “scrape” a maximum of 3 million tons. However, judging by the actual harvest, 7 million tons were exported ., i.e. twice as much. The collapse came, i.e. the simultaneous under-harvesting of arable land, massive decline and catastrophic reduction in the number of livestock, and millions of Ukrainians died of hunger.

The Molotov’s fighter of Holodomor, who, in fact, turned out to be Molotov (hammer-man), did not thresh grain with a flail. He crushed human destinies and the lives of millions with criminal initiatives, adopted resolutions, and illegal actions. He forbade the issuance of seeds to collective farms and state farms for sowing winter and spring crops, proposed a system of fines in kind for failure to fulfil the plan to the yard (in the amount of the market value of the unsupplied grain), repeated collection of the task, cessation of commodity supply to villages (even before the regime of black boards), “judicial repression” against “evaders” and “saboteurs” of grain procurement. The head of the union government demanded local leaders establish control over the work of each mill and from the punitive holding of “field sessions” of courts, that is, the practice of field courts during the period of war communism. The demand for “severe repression” against the farmers meant an extrajudicial bacchanalia and the authorities’ unlimited arbitrariness. The bodies of justice and the prosecutor’s office began to deal with the provision of forced harvesting. That is, they became complicit in the crime of the Holodomor.

The recognition by the Ukrainian court of V. Molotov (Skriabin) guilty of organizing the Holodomor genocide is quite fair. His actions were intended to massively and systematically deprive the farmers of grain, property, and food.

department of historical research of the Holodomor-genocide