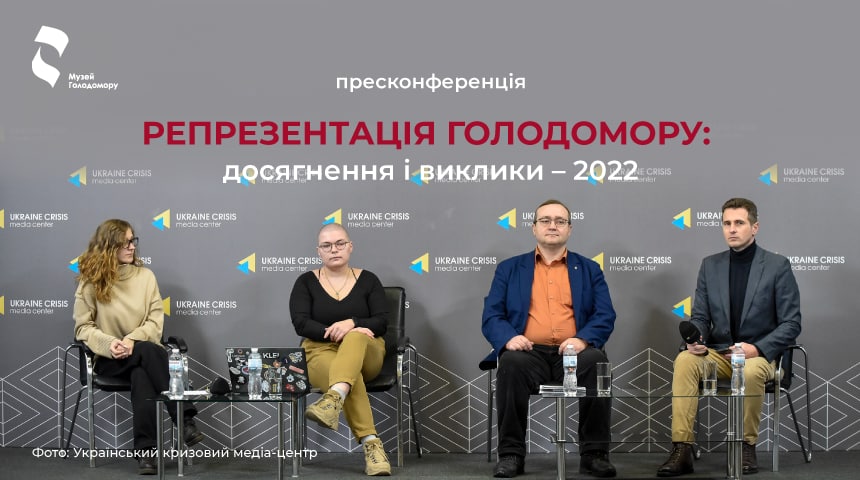 How the Holodomor topic became relevant in the conditions of the Russian-Ukrainian war and how the Museum can help spread the truth about the events of the past and present war – this was discussed on Thursday, November 1, at the press conference “Representation of the Holodomor: achievements and challenges – 2022”. The National Museum of the Holodomor-Genocide staff participated in the conversation at the Ukrainian Crisis Media Center.

“The Holodomor Museum, as a leading institution for the representation of the topic, is aware of its responsibility and directs all its activities to ensure that the Holodomor is known, studied, and, most importantly, recognized both in Ukraine and abroad,” emphasized Maryna Bohush, deputy head of exposition – exhibition department of the Museum. – In fact, the success of our work is evidenced by whether the Holodomor is recognized as genocide in the world. For us, this issue is fundamental. Only this year, Brazil, Ireland, Moldova, Romania, the Czech Republic and, just yesterday, Germany added to the list of countries that recognized the genocide of 1932-1933. It is a complex work of the entire museum together with Ukrainian communities abroad, as well as the Ministry of Foreign Affairs. It is not just a diplomatic and informational activity but an exhibition too.”

She also talked about new exhibition projects implemented in the Museum since the beginning of the full-scale invasion:

“In the spring, summer and early autumn, when there was an acute problem with a possible food crisis in the world caused by Russia burning our fields and stealing grain, we decided to cover this topic because it resonated very much with the Holodomor theme. We created the exhibition “Why Does Russia Steal Grain: The (NON)new History of Crime” and the installation “Lunch Prepared by Russia”, which used burnt grain from Ukrainian fields. We received a lot of good feedback about this installation, especially from young people, because it was something new and unusual. Another high-profile event was the exhibition “Leica that saw the Holodomor”. It was unique in that, for the first time in Ukraine, things that belonged to the Austrian engineer Alexander Wienerberger were exhibited – a camera and a photo album compiled by him with pictures of the Holodomor in Kharkiv. They were brought by Wienerberger’s great-granddaughter from Great Britain, where these rarities were discovered not so long ago. The project was a significant success in the media and among visitors.”

According to Marina Bohush, another successful example of the Museum’s activity was the premiere of the play SUN (“Son”) – the institution used this form of presenting the history of the Holodomor for the first time. The performance gathered a mass audience, was successful and received positive reviews, so the Museum plans to continue this experience.

Yana Horodniak, head of the excursion and educational department, spoke about the educational activities of the Holodomor Museum in the conditions of a full-scale invasion and new educational projects. In particular, this year, a new video excursion was created for the youngest visitors – schoolchildren aged 6-12, in which sand animation was used. Also, there is still a huge interest in video tours, created in the previous “Covid” years, which allow you to visit the Museum without leaving your home. A separate challenge for museum workers was the blackout and lack of communication, but even though it is usually possible to find a way out and reach a compromise.

Ms Yana drew attention to a revealing trend: this year, especially many children’s online excursions were ordered from regions that directly suffer due to Russian aggression. “These are Odesa, Mykolaiv, Kharkiv,” she said. “For instance, today my colleague had an excursion for children from Kurakhove, a front-line town.” It is evidence that Russia’s aggression has provoked a new wave of interest in our tragic history, which has much in common with current events.

Candidate of historical sciences and leading researcher Andrii Ivanets spoke about the scientific activities of the Museum and its branch – the Holodomor Research Institute. In particular, on the eve of the Day of Remembrance of the Holodomor victims, the institution held the annual international scientific and practical conference “Genocide as a weapon in the fight against the Ukrainian nation in the 20th-21st centuries: interdisciplinary approaches.” It was dedicated not just to the Holodomor but to the genocidal practices that Russia uses in current warfare too. The second plenary session of the conference was devoted to the last question, during which it was discussed how to qualify Russia’s modern war crimes and what Ukraine should do so that the aggressor is brought to justice and punished.

“It was a fairly representative scientific forum in which more than 50 experts participated – historians, lawyers, political scientists, representatives of the public administration sphere – from Ukraine, Poland, Great Britain, Germany,” says Andrii Ivanets. – Among them are famous Holodomor researchers Stanislav Kulchytsky, Vasyl Marochko, Andrii Kozytsky, and Olha Movchan.” At the same time, the second plenary session was attended by Anton Korynevich, ambassador on a special assignment of the Ministry of Foreign Affairs of Ukraine, agent of Ukraine at the UN International Court of Justice, Volodymyr Vasylenko, honoured lawyer of Ukraine, doctor of legal sciences, professor, Hennadii Poberezhny, professor of the Ukrainian Free University (Munich, Germany), Valery Udovychenko, SBU colonel, the officer on special assignments of the Department of Counterintelligence Protection of State Interests in Information Security of the Security Service of Ukraine, Ihor Solovei, head of the Center for Strategic Communications and Information Security and others.

The Holodomor of 1932-1933 and the current Russian-Ukrainian war have much in common. The goal of Stalin’s regime then and Putin’s now is identical – to subdue Ukrainians, break their resistance and destroy them as a nation. Given the Holodomor Museum, it collects information and exhibits and records modern Russian war crimes that have signs of a genocidal policy.