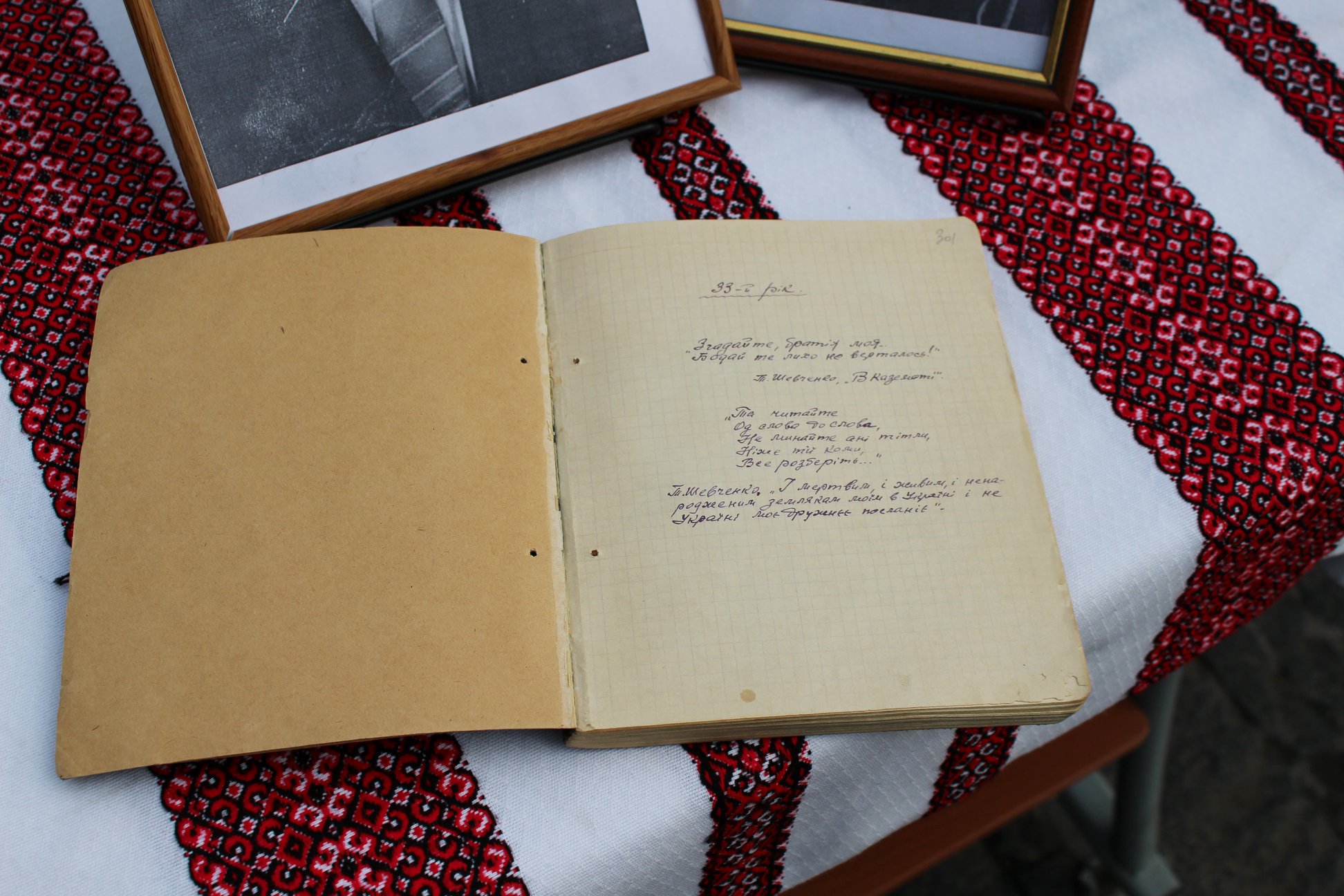 On November 23, 2020, a notebook with memoirs of Lavrin Nechyporenko about the Holodomor of 1932–1933 was handed over to the National Museum of the Holodomor Genocide.

“This is a very talented novel by Lavrin Nechiporenko, written with fundamental accuracy. In each chapter he tells about his memories, about what he personally saw in the famine-stricken, starving Zhytomyr region. Lavro brought this notebook to his friend Ivan Kovalenko so that he could edit it and type it. As a member of the resistance movement, Ivan distributed samizdat. So this notebook went to Ivan’s home, and in 1972, when he was arrested by the KGB, they confiscated all his works. In 1996, Ivan forced the archive to return the seized materials. It contains prints of the KGB archives, a notebook is punched in two places, it was sewn to the criminal case of Kovalenko. The first page is numbered as the 301st, so it was used as evidence in the case,” the initiator of the transfer of the exhibit Andrii Kovaliov said.

Maria Kyrylenko, a public figure, daughter of the poet, dissident and witness of the Holodomor of 1932–1933, Ivan Kyrylenko, said: “This notebook is the history of the Nechyporenko and Kovalenko families and at the same time the history of the whole of Ukraine. It is difficult for the younger generation to understand how complex and crumbly the real history is. It is important to digitize the notebook and publish it. Such materials and testimonies should be available to every Ukrainian. The truth can be difficult, sad, tragic, but we need to know it. “

Oleksandr Nechyporenko, the son of the author of the diary Lavrin Nechyporenko, emphasized that it is necessary to record what is happening, not to think that it is insignificant, to write memoirs about events.

Tthe Holodomor Museum starts a mass campaign of collecting the testimonies, relics, photographs of families who survived the Holodomor of 1932–1933. The notebook currently takes the main place in the exposition of the Holodomor Museum together with other newly discovered exhibits. Later, they will become the basis of the exposition of the second stage of the Museum, which is currently under construction. The opening is scheduled for 2023.

“I am very grateful to the Nechyporenko family and the Kovalenko family. We all know about the information blockade, how it was forbidden to talk about the Holodomor and to mention in families that there was a famine. We know that back in 1986 the last soldier was convicted for mentioning the famine in Ukraine, that his family was starving, that the whole world could not talk and remember the Holodomor. These exhibits are extremely important for our museum, for the museum which is under construction,” Olesia Stasiuk, Director General of the museum said.

Olesia Stasiuk also appealed to the public to help collect exhibits for the creation of the Holodomor Museum, the construction of which is already underway: “Let’s create a National Museum of the Holodomor Genocide together. It is very difficult to create the exposition after 87 years. It is necessary for our descendants. We need to tell the truth not only about the tragedy that has been talked about for the last 30 years, but about the crime committed by one state against the Ukrainian nation. This crime was committed only bacause they managed to occupy our country.”

In the 1960s, Lavrin Nechyporenko, a physics teacher from Boiarka in the Kyiv region, wrote his memoirs about the Holodomor genocide in his native Zhytomyr region in a simple school notebook. He called his work “Year 33”. It is obvious that in the Soviet Union he could not publish his memoirs anywhere. Together with a colleague, a teacher from a nearby school Ivan Kovalenko, they decided to publish a diary in samizdat. This was risky, as the publishers coukld have been repressed and sentences to imprisonment in Soviet concentration camps. For some time Ivan Kovalenko kept a notebook with memoirs. He had to finish editing it and type it.

In 1961, the KGB began investigating Ivan Kovalenko, and in 1972 he was arrested “for producing and distributing anti-Soviet materials.” Kovalenko spent 5 years in Soviet concentration camps. All manuscripts from Kovalenko’s house were confiscated, and a notebook with Nechiporenko’s memoirs was confiscated too. The diary miraculously survived among the confiscated items in the KGB archives.

In 1996, the Security Service of Ukraine returned all the manuscripts to Ivan Kovalenko, and with them a notebook with Lavrin Nechyporenko’s memoirs. The diary of a Holodomor witness was kept in Ivan Kovalenko’s family, and on November 23, 2020, it was transferred to the funds of the National Museum of the Holodomor Genocide.