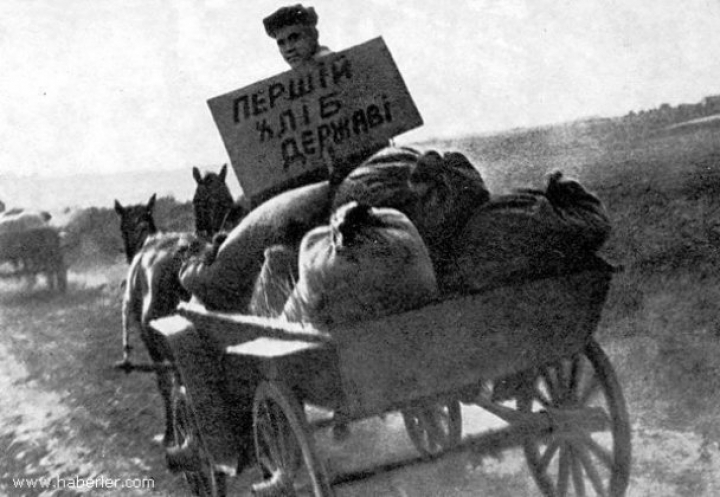 Every tragic event of the current Russian aggression against Ukraine, especially the war crimes of the so-called older brother, forces us to analyze the whole chain of similar phenomena in the history of Russian-Ukrainian relations, beginning immediately after the Pereyaslav Council in January 1654. And this is not only about huge casualties among the civilian population, destroyed cities and villages, but also about such humanitarian catastrophes that we see in Mariupol and other blocked cities. From them, the Russian occupiers do not release refugees and do not allow food aid there, thus dooming thousands of their inhabitants to starvation.

Why such a cruel punishment for civilians? For not kneeling before the whims of the “Russian peace,” for not meeting the uninvited “liberators” with bread and salt and flowers?

Unfortunately, such a precedent arose in the first days after the Pereyaslav Council, when Bohdan Khmelnytsky recklessly invited the Moscow army to Ukraine, which together with our Cossacks should liberate all Ukrainian lands from the Poles. But that detachment of three thousand did not go to war in the west but settled in the monastery gardens around Sophia of Kyiv, besieging it. This blockade and the destruction of the monastery’s food supply by the Muscovites were a show of punishment for the Orthodox of Kyiv, led by Metropolitan Sylvester of Kosovyi who refused to swear allegiance to the Moscow tsar.

And when his troops were already occupying all regimental cities, where they had to be held at the expense of the Hetmanate, such abuse of Ukrainians became an effective tool of genocide against the indigenous population of Ukraine: year after year pulling the Cossack masses in various campaigns, canals and construction work. Moscow contributed to the fact that many of our soldiers not only died abroad, but many fields were not cultivated, or the harvest was not collected – there was no necessary labor. Of course, this not only led to the decline of agricultural production but also created problems with food security for the local population.

That was one of the reasons for Ivan Mazepa’s speech against the Moscow autocracy in the early eighteenth century. Then the colonels, often coming to the Hetman, regretfully said that “the Cossacks, leaving their homes, mowing and harvest, endure hardship and heat in the service of the tsarist majesty, and there Great Russian people rob their homes, dismantle, burn, do harm to women and daughters, horses, cattle and all property are taken away, the sergeant is beaten to death. “

A similar situation arose during the construction in 1731-1733 of the so-called Ukrainian line, about which the following evidence is preserved in our national historical memory:

Yes, no one to reap:

The requisition of food for the desire of Ukrainians to be independent was especially widely used by the Russian Bolsheviks. Having seized power in Russia, Lenin and his associates hoped to receive Ukrainian bread free of charge. And when the UPR government refused to sell food without prepayment, the so-called Soviet UPR in Kharkiv was organized on Russian bayonets. So, Lenin demanded from the first classic “ichthamnets” Antonov-Ovsienko and Ordzhonikidze daily to send food to the north, as reported in a telegram dated January 13, 1918: “For God’s sake, take the most vigorous and revolutionary measures to send bread, bread, and bread. !!! Otherwise, Peter may die. Special trains and detachments. Collection and dumping. To see off trains. Report daily. For God’s sake!”

And such telegrams are sent to Kharkiv every day. For example, on January 22, the Bolshevik leader emphasized: “For God’s sake, continue to do everything in your power to gather food, hastily organize the collection and pouring of bread in order to have time to establish off-road supplies. Take measures for the triple protection of the Peter – Kharkiv track… ».

Finally realizing in 1919 that the fate of the Russian Soviet Republic was decided primarily by Ukrainian bread, its leader Lenin never backed down from this conviction, solving the problems of Bolshevik power both inside his country and abroad through the appropriation of the labor of our farmer, leaving him without means of subsistence.

Lenin then choked with joy that he was able to tear them away from the real owner by brute force: “We set ourselves the task of allocating one hundred million poods of bread to distribute it by force in the provinces and counties. 100 million for starving Russia, for Russia, which is once again facing the threat of a new enemy invasion from the east. These 100 million are a colossal figure… Rich Ukraine, bread Ukraine is ours: the Moscow proletariat will not starve. “

Therefore, it is not surprising that the issues of requisitioning Ukrainian bread are constantly considered at the meetings of the Politburo of the Central Committee of the RCP (B). For example, on January 23, 1920, the statement of the head of the Ukrainian Labor Army of Stalin “give 400 to 500 more or less conscious, not necessarily a party, workers from Petrograd, Ivanovo-Voznesensk, Moscow, and the industrial province in general for food work in Ukraine.”

And the Moscow Bolsheviks immediately formed requisition detachments “to supply the army and the poor with food,” which were also called barricades. In the Chubynets volost of the Skvyra district of the Kyiv province, for example, the food detachment of the Bashkir division collected from August 20 to September 15, 1920: 20,000 poods of rye, 15,000 poods of oats and barley. In addition, 11,000 poods of hay, 360 pigs, 500-600 cows, 800 poods of lard and meat, 900 chickens and geese, etc. were taken from the peasants.

When plundering the Ukrainian peasantry, those who brought the new regime on bayonets did not neglect any methods. “Don’t care that the starving die, 75% of the population will die, and if not die – we will shoot them,” said Communist Latipov, the head of the Communist Labor and Cavalry Inspectorate, then 25% will be submissive. We need Ukraine itself: we don’t need people. ” This is what the leader of the USSR, Khrystyian Rakovsky, said exactly in September 1920 in Zhytomyr at a secret meeting of communists.

Therefore, two years before the formation of the USSR, the issue of Ukrainian bread was decided exclusively in Moscow. For example, the resolution of the Politburo of the Central Committee of the Russian Communist Party of September 19, 1920, provided the export of 57 million poods of the grain of the new harvest from Ukraine to Russia. And this number constantly appeared in the formidable directives that came to Kharkiv, then the capital of the USSR, signed by the top leadership of the Bolshevik Party. Lenin then gave clear instructions on how to take away Ukrainian bread: “We must radically change (the supply system of the Russian Bolshevik army. – VS): stop giving anything. No bread, no clothes, no shoes. Tell the Red Army: either walk away now “without anything,” or wait one year for 1/8 pound without clothes, without shoes. Then he will go alone and on foot. “

(This tradition of Russian military looting has been passed down today in the temporarily occupied settlements of Ukraine – local residents doomed by uninvited “liberators” are doomed to a new Holodomor).

It is clear that the pumping of bread from the USSR in such quantities led to the devastation of all food supplies, which was the main cause of the famine of 1921 – 1923. However, our peasantry, like the Ukrainians of the North Caucasus, remained steadfast, and their people’s war against Bolshevik Moscow did not subside, the scale of which worried the Kremlin rulers more and more. Especially Stalin, who apparently mentioned the Kronstadt uprising in the winter of 1921, led by Ukrainian S. Petrychenko. That is why, on August 11, 1932, Stalin wrote to Kaganovich: “If we do not undertake to rectify the situation in Ukraine now, we may lose Ukraine.”

Therefore, the requirement for the Central Committee of the CP(B)U and the People’s Commissar of the USSR to implement the grain procurement plan under any circumstances meant to take away everything edible. And on January 1, 1933, Stalin sent an ominous telegram about the voluntary surrender of hidden bread, after which all food would be confiscated from the farmers, which would lead to the Holodomor, unprecedented in human history. Its dire consequences will be closely monitored by “watchers” specially sent by Moscow. One such foreigner in the Kuban environment, a certain Zaitsev, as the head of the political department, listened to the reports of the heads of local collective farms in the Ukrainian village of Novoderevyankivska every night: “How many died people have you had today? 70 people. Few! And you? 50 people. Few!!!”.

Such Moscow commissioners organized a kind of competition to increase the number of victims of Ukrainians from the artificially organized Holodomor in 1932-1933. And for our nation, it cost ten and a half million losses, including more than 4 million children. Moscow did not succeed in overcoming these casualties after World War II when it again used the twice-tried method of mass confiscation of Ukrainian food. Maybe because Ukrainians adapted to constant malnutrition, they had “life became better, life became more fun”?

The genocide of Ukrainians in the current Russian-Ukrainian war through the artificial creation of famine is manifested not only in blocking food aid to the surrounding settlements but also in preventing the sowing of fields. The latter is deliberately destroyed by the occupier’s hostilities, the enemy blows up agricultural machinery, shoots primarily at the tractors, passes our chernozem( black soil), which is already ripening to take the seeds into its bosom.

And this is not only the genocide of Ukrainians: it is a punishment for the whole world, which today supports Ukraine because our unsown fields are ungained bread and other products that we share as a recognized world granary.