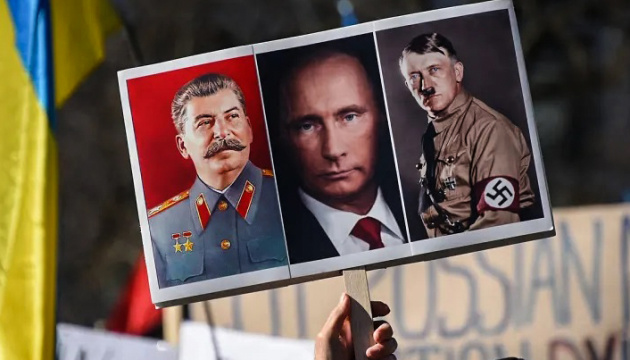 Russia’s full-scale aggression against Ukraine, which began on February 24, 2022, demonstrated to the world the shocking peculiarity of the Russian people. This phenomenon was defined by the American philosopher and culturologist Mikhail Epstein as follows: “No nation in the world has so far managed to fall into the same pit of totalitarianism twice in a row. The Russians managed to do it.”

Several nations tried to build a totalitarian society in the last century. The most famous examples of such socio-political experiments were Italy, Germany and the USSR. However, the Italians and Germans, whose state institutions developed for a specific time in a totalitarian paradigm after the defeat in the Second World War, made appropriate conclusions. Rejecting the totalitarian legacy, Italy and Germany created an elaborate system of constitutional and social safeguards to ensure that there is no return to an undemocratic form of government.

The Russians took a completely different path. Having lost the Cold War, they did not even try to rethink their totalitarian experience. On the contrary, thanks to government propaganda, many Russians have developed an enormous psychological complex, a feeling of resentment against the West countries, which, as it were, humiliated and deceived “mother Russia” during the 1990s. It is this grudge against the collective West, nurtured by the Kremlin in its citizens that now allows Russians to justify any arbitrariness, lies and cynicism of their government in favour of misinterpreted national interests.

History became the first victim of Putinism. The Russian political regime has been systematically and consistently engaged in its falsification for the past twenty years. The lack of adequate evaluations of the past has led to the fact that remembering the Soviet times, many Russians feel nostalgic for the feelings of imaginary great power that gave them the involvement of the communist empire, a country that was one of the centres of world politics during the Cold War.

Unlike Ukraine, Putin’s Russia did not decommunize. Moreover, it was the Ukrainian decommunization that caused Putin to burst into an uncontrollable rage. Everyone remembers how, three days before the full-scale aggression against Ukraine, the president of Russia, clenching his fists and twisting his mouth, said: “Do you want decommunization?! Well, that’s fine with us. But it is not necessary, as they say, to stop halfway. We are ready to show you what real “decommunization” means for Ukraine!”

The unbelievable primitiveness of Putin’s historical views is well known. In his view, the USSR is “just Russia”, which temporarily had a different name, “Ukraine was created by Lenin”, and “the collapse of the Soviet Union is the greatest geopolitical catastrophe of the 20th century.” When quoting the last of these Putin phrases, one usually does not pay attention to the adjective used by the Russian leader – “geopolitical”. The Russian president obviously really thinks that the whole world suffered from the collapse of the USSR and that everything became worse because the communist empire disappeared.

This example clearly shows that lies and self-deception are the truequintessence of the worldview of Putinism. Putinism is morally much worse than Nazism and Stalinism. Hitler and Stalin never hid their atheist views but Putin, on the contrary, declares his religiosity, visits church in front of television cameras and reflects on Russian spirituality and the unspiritual West.Having attacked Poland, Hitler did not say he had come to “denazify” it. While occupying the Baltic states, Stalin did not assure anyone that his goal was their “decommunization”. Instead, Putin, accusing Ukraine of “Nazism” and committing “genocide against the people of Donbas”, himself tried to destroy Ukrainians as a nation. Putinism is a deliberate blurring of any landmarks, inflation of words, programmatic targeting of meaning devaluation. In Putin’s Russia, words get the opposite meaning: aggression becomes “friendly help”, leaderism – “controlled democracy”, and chauvinism – “spirituality”.

Putinism is a system of government that rewards people’s unconditional devotion to money and power without regard for their personal morality. Moreover, there are reasons to say that Putin’s system consciously and deliberately transfers power to morally worse people: corrupt primitives and unprincipled nonentities. Putinism rests on indifference and ignoring the problems of the majority of the country’s population. People themselves create censors in their heads that monitor dangerous thoughts, such as “discrediting the armed forces of the Russian Federation.” Russian citizens are used to answering the questions posed by the government, or those whom ordinary Russians consider stronger than themselves, exactly as they are expected to do. Guessing what the authorities want to hear in response to their question has become a real national sport in Russia. Recently, a video has gained a lot of popularity on the Internet, in which a young Russian man who fled from mobilization to Kazakhstan, to the question of one of the Kazakhs, “Whose Crimea?” without thinking answered “Kazakh.”

According to M. Epshtein: “The Russian people fell into ecstasy with incredible ease, in just a few days, caused by the seizure and annexation of foreign territory. Although he took this land from the people he called “brotherly”. This real flurry of anger, hatred and stupidity is frightening. The ideology of rushism is related to fascism in the same way that nuclear weapons are related to conventional weapons. Rushism is an ideology of total hatred, not of any class, nation or race but of the whole world as such. It is an insane idea of absolute hegemony of one gang terrorizing the whole world with threats of nuclear war. However, there is another terrible thing about rushism – the people’s enthusiasm. The Russians have the Internet, so they can learn the truth if they wish. But they do not do this, which makes there is less and less doubt that it is not Putin’s dictatorship that is oppressing the Russian people, but it is the whole people that want this kind of power over themselves. For the Russians, the moment of truth has come.”

In order to be inoculated against the danger of the return of totalitarianism, the people must honestly sum up their past experiences: identify the crimes committed in their name and call the evil – evil. For Russians, this means, first of all, condemning all the crimes of the USSR and repenting for them. There is no doubt that without condemning Stalinism, Russia will not be able to get rid of Putinism. However, there are still no signs that Russian Federation citizens are going to climb out of the pit of totalitarianism into which they have fallen for the second time. The current generation of Russians is failing the most important exam in their lives in front of the whole world.