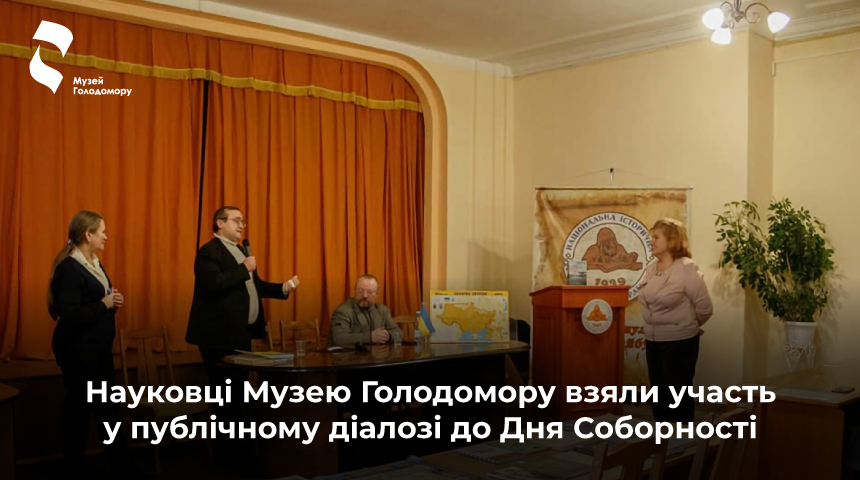 Organizers of the event are the National Historical Library of Ukraine and the National Museum of the Holodomor-Genocide .

“At the moment of the biggest threat to the unity of Ukraine from the aggressive Russia, the significance of Unity as a fundamental value for the existence of the Ukrainian nation and the Ukrainian state is more obvious than ever,” said Andrii Ivanets, a leading researcher of the Holodomor Research Institute of the National Museum of the Holodomor- Genocide. He reminded us that the understanding of the Sobornist (Unity) as the territorial unity of the state is right but not complete. As this concept includes the unity of the Ukrainian nation in space and time and the consolidation of various social groups and ethnic communities of the Ukrainian state. The principle of Unity is based on the responsibility of everyone for everyone, a combination of collective national and individual interests.

The speaker talked about the culminating event of the Ukrainian Revolution of 1917-1921 — the unification of the ZUNR (Halychyna, Bukovyna, Carpathian Ruthenia) and Naddniprianshchyna into a single independent UNR (Ukrainian National Republic) and, in particular, about the Universal of the Directory of the UNR, solemnly proclaimed on January 22, 1919. Unfortunately, at that time, primarily due to the war, it was not possible to maintain the state unity of the UNR on several fronts at once. However, Andrii Ivanets is convinced that it is definitely not worth devaluing the proclamation of the Act of Unification of the UNR in 1919. Ukrainians from both sides of Zbruch created a precedent when they clearly expressed their will to unite in an independent united state. It influenced the future of the Ukrainian nation. The historian also recalled the traditions of the celebration of the Day of Unity, in particular, the chain of unification in 1990 and the imperative of the liberation and reintegration of Crimea to ensure the national interests of Ukraine.

The head of the historical research department of the Holodomor Research Institute of the National Museum of the Holodomor-Genocide, Dmytro Bily, dedicated a report to the history of Donbas as an integral part of the unity of Ukraine. The speaker talked about the main stages of the history of this region from ancient times to the present day, about its crucial significance, culture and economy of Ukraine. Although part of Donbas is temporarily occupied by Russia, none of the listeners had any doubt that the time of its complete liberation is approaching, and this region will still play its outstanding role in the reconstruction of post-war Ukraine and its further development.

Alla Novytska, a worker at the National Historical Library, spoke about the books on the unity of Ukraine presented at the exhibition in the reading room. Among them were the staff’s studies of the National Museum of the Holodomor-Genocide.