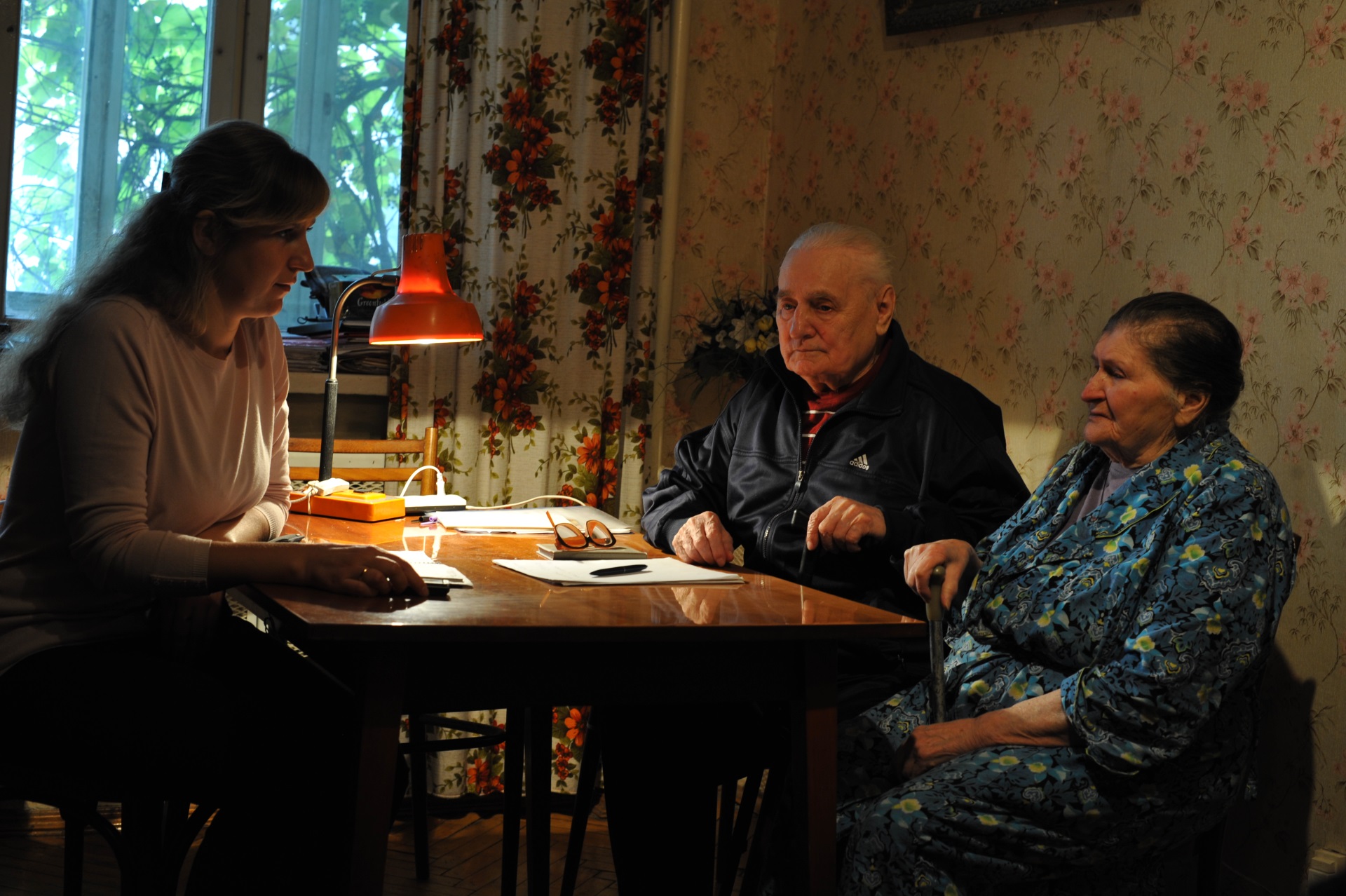 The couple Kryvonis witnessed about the Holodomor to the museum

As part of the work on collecting evidence of Holodomor eyewitnesses, the head of the Scientific-Research department Julia Kotsur and the Senior Collections Specialist, Nina Lapchynska, together with the photographer Kseniia Pyliavska, visited the spouses Kryvonis, who now reside in Kyiv. In our time, when there are very few Holodomor witnesses, this pair is unique.

Despite the fact that the husband and the wife have experienced these terrible years in different regions of Ukraine (Oleksii Ostapovych (1926 year of birth) – in the village Savyntsi in Chernihiv, and Vira Nykyforivna (1927 year of birth) – in Kiev) their stories have much in common and show the brutality of the crime that the Stalinist regime committed against all Ukrainians.

Vira Nekyforivna was born in Tereshky village, Cherkasy region. In the early 1930s, her mother went to Kyiv, and small Vira was left with her father in the village. When the hungry years began, the mother took her daughter to the city, which saved Vira Nekyforivna. Her brother, who remained in the village with his father, died of hunger and was buried in a fraternal grave in Tereshky.

It’s very difficult for women to remember these painful moments of hungry childhood, she cannot hold back emotions and is constantly crying.

Olexii Ostapovych was born in a wealthy peasant family. Children’s memories of the man are associated with such serious terms as collectivization, dekulakization, and the Holodomor: “And then, when I was born and when we began to live, collectivization began. But neither the father nor the mother, nor his brothers – wanted to join collective farm. They did not join collective farms; they wanted to be single farmers. This is how we lived until 1933. In the thirties … In the thirties … Before the Holodomor started, all bread was taken away from us…”

People were supposed to eat surrogate products, remembers Olexii Ostapovych: “When the spring came, we were walking through the fields, collected frozen potatoes, gathered frozen carrots. Then in the cold water we made it thaw. Then rubbed, took starch out and here and there could find some flour – we baked pancakes, sometimes ate.

Later, when leaves appeared on the trees, we ate the leaves of linden tree, because it’s soft and could be easily eaten. And flowers – I ate clover, I remember it very well. I remember how we were beating them; we always went to the garden. It was called “lord garden”, it was nearby, not far away”. We went and beat branches – threw stones, logs, in order to hit the blossom…”

Such “nourishment” left its consequences and small swollen Oleksii didn’t go to school in starving 1933: “I then didn’t go to school in 1933, because I was swollen. I had fistulas on arms and on legs for some reason, I remember that they burst and some liquid got out there. So I was not taken to school because I was very week. In 1934 I went to the first grade of Savynska school. And I had classes with Nikitenko, who was one year younger, because I wasn’t taken earlier. I studied at school 7 years. In 1937 they took our father. They took him and imprisoned – for nothing”.

In 1933 the family of Kryvonis was driven away from their house and other people were settled there: “They drove us away and took the house on the account of the local council. They brought us to this local council at night and said ‘You don’t have your house anymore’”.

The Holodomor turned wealthy Ukrainian villages into a waste land: “They attacked and took everything. They didn’t come in the evening, because people died even on the streets and further. When someone was bringing something in hands, they wore hats and took what you had. And who did it – you can’t prove it, there is no one to turn to. That is why we didn’t walk at night, there was no light everywhere.”

Mass mortality in the years of the Holodomor became the norm for Ukrainian villages: “I know for sure that there were fraternal graves, but mostly people were buried separately…separately…buried…There were 2 cemeteries – one from the side of Hurbynets and another one from our side, it was organised from 10 brigades. On the territory of the village there were 10 brigades and we were on the 10th, which was counted as the 10th brigade.”

Surviving all these terrible events, Olexii Ostapovych understands how important it is to prevent such crimes from happening again: “We should constantly tell about the Holodomor, this is our history, it should not happen again. It shouldn’t be like this and we shouldn’t let it happen”.