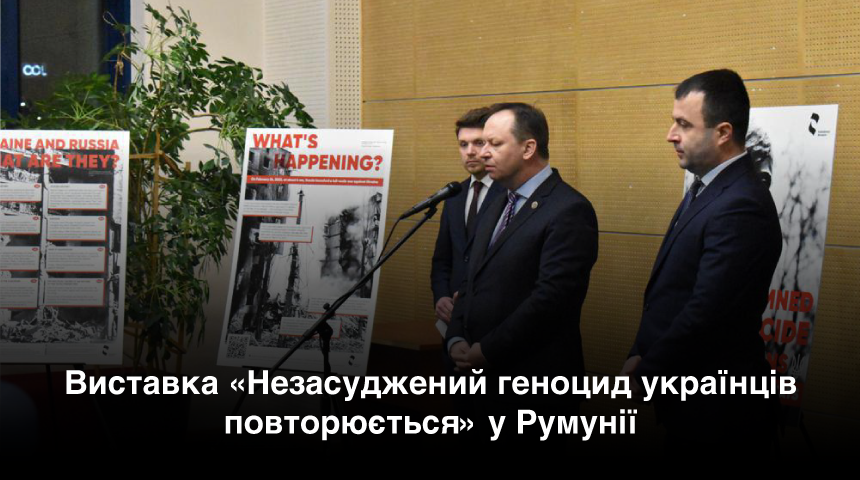 The exhibition “The Unсondemned Genocide of Ukrainians Repeats” in Bucharest

On Thursday, December 15, the Embassy of Ukraine in Romania, in partnership with the National Museum of the Holodomor-Genocide and the Museum of Communist Terror in Romania, opened the exhibition “The Uncondemned Genocide of Ukrainians Repeats”. You can familiarize yourself with it in the National Library of Romania in Bucharest. The Embassy of Ukraine in Romania announced it on its Facebook page. The exhibition tells about the Holodomor-genocide of Ukrainians in 1932-1933, committed by the Stalinist regime, and Russia’s new war of aggression against Ukraine, which was started by the Putin regime.

Ambassador of Ukraine to Romania, Ihor Prokopchuk, opening the exhibition, noted that both in 1932-1933 the Stalinist regime and today’s Kremlin regime committed mass and systematic crimes against the civilian population on the territory of Ukraine with the intention of completely or partially destroying the Ukrainian people and liquidating Ukrainian statehood. Such actions are defined as genocide.

“Recognition by the world states of the Holodomor of 1932-1933 as an act of genocide of the Ukrainian people is a matter of historical truth, a powerful contribution to the consolidation of international efforts to condemn terror, totalitarian regimes and crimes of totalitarianism, as well as the defense of common civilizational values of democracy, fundamental human rights and freedoms.” – says the post of the Embassy.

We will remind you that at the end of November, Romania recognized the Holodomor in Ukraine in 1932-1933 as a crime against the Ukrainian people and humanity. Ambassador of Ukraine to Romania, Ihor Prokopchuk, welcomed this decision of the Romanian Parliament. At the same time, he emphasized the need for the next step – Romania’s recognition of the Holodomor as genocide of the Ukrainian people.

The Ambassador of Ukraine drew attention to the fact that on the day of the exhibition opening, December 15, the European Parliament adopted the relevant resolution.

During the exhibition opening, a citizen of Ukraine who found refuge in Romania shared her personal story of being under occupation in Chernihiv Oblast and her rescue.

Photo – Embassy of Ukraine in Romania.