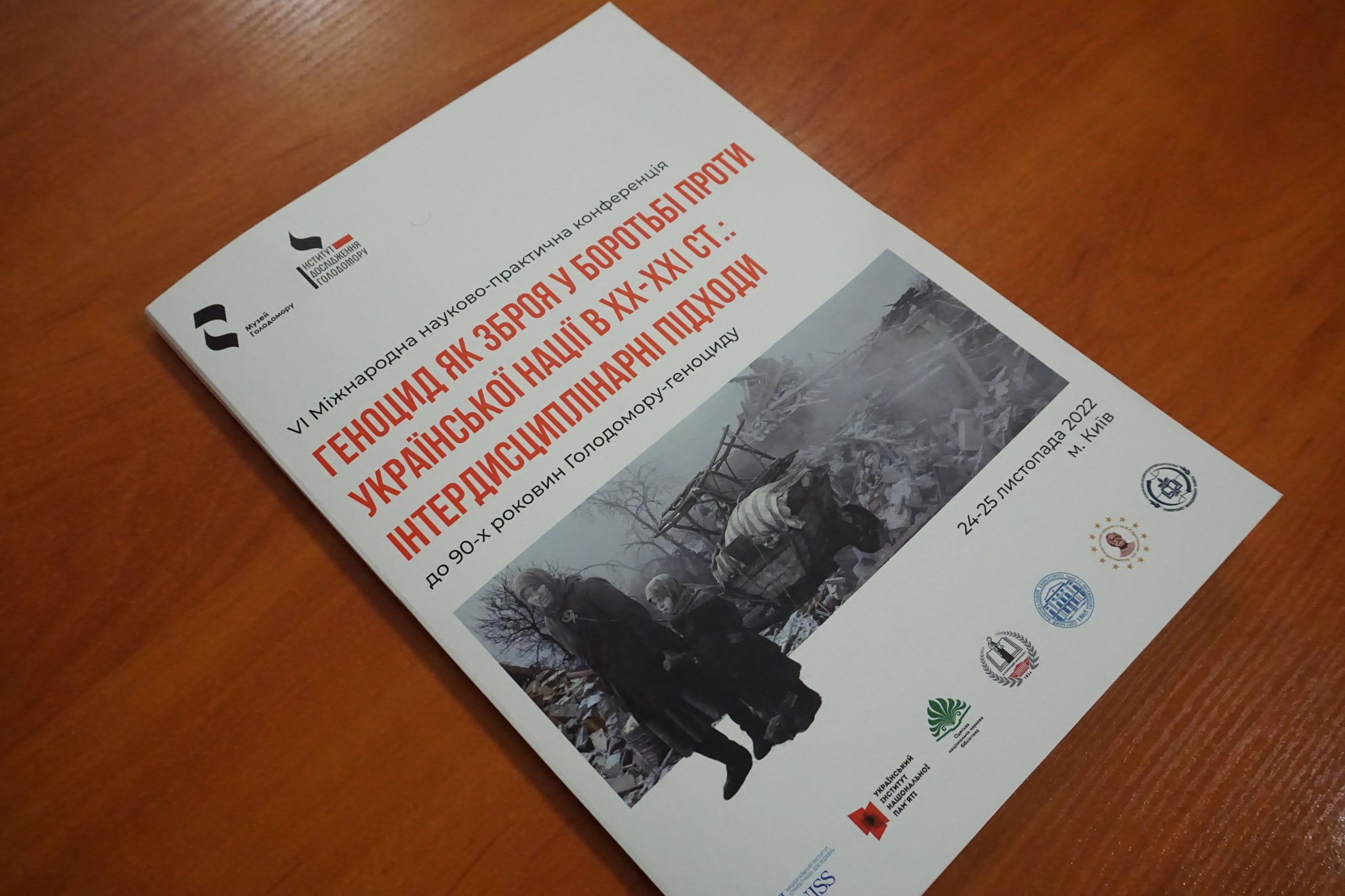 The first plenary session of the conference “Genocide as a weapon in the fight against the Ukrainian nation in the XX-XXI centuries: interdisciplinary approaches” was held

On Thursday, November 24, the first plenary meeting of the VI International scientific and practical conference “Genocide as a weapon in the fight against the Ukrainian nation in the XX-XXI centuries: interdisciplinary approaches” took place in the premises of the University of Education Management of the National Academy of Pedagogical Sciences. The conference was organized by the Holodomor Research Institute in cooperation with the Ministry of Culture and Information Policy and a number of scientific institutions.

Opening the scientific meeting, Mykola Kyrychenko, rector of the University of Management of Education of the National Academy of Pedagogical Sciences of Ukraine, corresponding member of the National Academy of Sciences of Higher Education of Ukraine, doctor of philosophy, professor, emphasized the importance and relevance of holding such scientific conferences. After all, knowledge about one’s past is a powerful weapon in the current war unleashed by Russia against Ukraine.

Serhii Kornovenko, a doctor of historical sciences, professor, and director of the Research Institute of Peasantry and the Study of Agrarian History of Bohdan Khmelnytskyi Cherkasy National University, also spoke about the importance of the ideological front and its contribution to the fight against the Russian invaders in his welcome speech.

In their reports, well-known Ukrainian historians talked about the preconditions and causes of the Holodomor genocide in Ukraine, the mechanisms of its implementation and consequences, the resistance of Ukrainians to the repressive actions of the communist totalitarian regime, as well as the policy of concealing the truth and denying the Holodomor-genocide by the communist totalitarian regime and modern Russia.

Iryna Biriukova, general director of the Odesa National Scientific Library, devoted her speech to the topic of the preservation of literature about the Holodomor in libraries and the importance of the library as a communication platform.

Oleksandr Gudyma, deputy of the Verkhovna Rada of Ukraine of the 1st convocation, spoke about the first scientific conferences on the Holodomor and local studies in the Vinnytsia region.

Stanislav Kulchytsky, a doctor of historical sciences, professor, and acting chief researcher of the Department of History of Ukraine in the 20s and 30s of the 20th century of the Institute of the History of Ukraine of the National Academy of Sciences of Ukraine analyzed Stalin’s use of V. Lenin’s experience in the organization of mass man-made famine in 1921-1923. He recalled that the information blockade around the topic of the Holodomor lasted until 1987.

Vasyl Marochko, a doctor of historical sciences, professor, and leading researcher at the Holodomor Research Institute researched the issue of refugees during the Holodomor. He analyzed the emergence of the term “refugee” and the parallels between refugees in 1932-1933 and 2022. “The 2006 law on Holodomor-genocide lists two categories of victims: the dead and those who suffered physical injuries. Somewhere, today’s relevant category of victims – refugees – disappeared, Vasyl Marochko noted. – This prompted me to research the emergence of the “refugee” phenomenon. As it turned out, it first appeared in Ukraine in 1919.”

Serhii Kornovenko, a doctor of historical sciences, professor, and director of the Research Institute of Peasantry and the Study of Agrarian History of Bohdan Khmelnytskyi Cherkasy National University analyzed how the communist totalitarian regime destroyed the Ukrainian peasantry and “educated” a new type of Soviet peasant. “A new figure in the agrarian history of Soviet Ukraine at the end of the 1920s and beginning of the 1930s is the collective farm and state farm peasant,” he said. – Compared to the previous type, this was a qualitatively different peasant formed in the new Soviet ideological and intellectual field. The “idea of the Earth” was perceived by him in a qualitatively different way, his consciousness reflected other priorities. First of all, it is devotion to the party’s goal, identification with the new proletarian public, and forgetting one’s past. Coercion was considered a permissible means of re-educating the peasantry, creating a “new rural man” and “a new psychology of the working peasantry”.

A scientist from Poland, Robert Kuśnierz, a professor at the Pomeranian Academy, devoted his report to the situation in a Ukrainian village after the Holodomor. He noted that although the Holodomor was defined in 1932-1933, the deaths of people exhausted by hunger were recorded in the villages even in 1934.

Doctor of historical sciences Marcin Zwolski from the Sybir Memorial Museum (Bialystok, Poland) spoke about the history of the creation of the museum, and the research carried out there. “As the only museum in Poland we present the issue of the Soviet repressions related to mass deportations to Siberia and Kazakhstan. We show that this experience is common to Poles, Ukrainians, Belarusians, Lithuanians, Latvians, Estonians, Jews, Russians and many other nations of the world.” he noted “But we present not only themes related to deportations. As a narrative museum, we try to explain the background of the presented events. Therefore, before the visitors enter the space showing the suffering of the deportees, they visit the space dedicated to the construction and history of the communist system, entitled: Criminal System. The Soviet Union was the first communist country in the world. It was formed as a result of a revolution in the name of a utopian idea of universal equality. In practice, the Soviet system was based on terror and fear. The museum mentions the Holodomor in Ukraine as one of the examples of such terror – the tragedy of Ukrainians is also presented in the exposition of the Polish museum. At the same time, Mr. Zwolski reminded that in 2019 they held the exhibition “Soviet Holodomor – Genocide in Ukraine. They killed us because we are Ukrainians…” which was prepared by the National Museum of the Holodomor-Genocide in Kyiv. The exhibition aroused great interest among visitors. And this was one of the two exceptions when the museum exhibited the exposition of another museum.”

A lecturer from the University of Huddersfield (Great Britain), Sarah Nesteruk, the author of the “Recipes for Baking Bread” project, told about the story of the discovery of letters from South African engineer Jerry Berman and how it prompted her to create animated videos dedicated to the Holodomor. She demonstrated one of them to the participants of the scientific meeting.

In total, almost fifty scientists participated in the conference, who highlighted in their reports and discussed various issues and aspects of the history of the Holodomor genocide.

We remind you that on Friday, November 25, the second plenary meeting of the international conference will take place. During it, we will be discussing the legal qualification of today’s actions of the aggressor state in Ukraine and the creation of a special tribunal to hold the Russian leadership accountable. The conference will be held at 11:00 a.m. on the premises of the Ukrinform agency (8/16 Bohdana Khmelnytskogo St.).