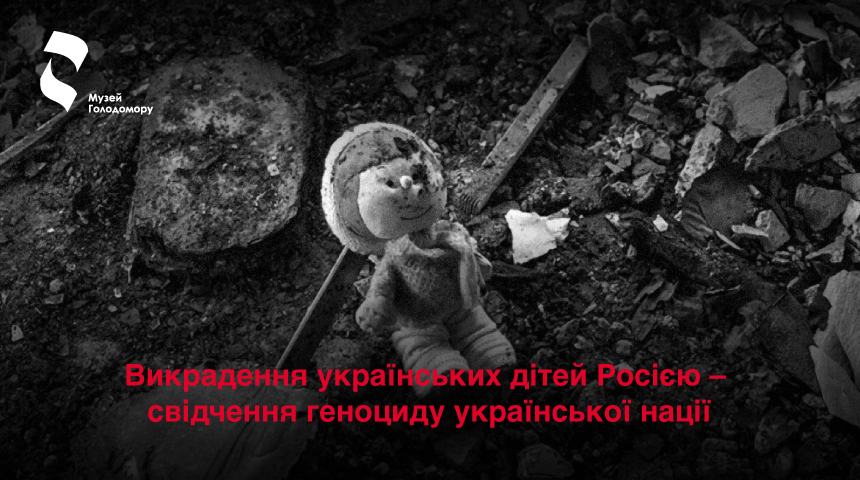 The war of aggression, which Russia has launched against Ukraine since February 20, 2014, at the current stage has the character of a large-scale invasion. Its goal is the genocidal destruction of the Ukrainian nation. Putin and other members of the highest political leadership of Russia, the state media of the aggressor country, openly, publicly and repeatedly declared this intention.

The criminal actions of the Russian armed forces on the territory of Ukraine fall under all the signs of genocide defined by Article II of the UN Convention of December 9, 1948 “On the Prevention and Punishment of the Crime of Genocide.”

Actions carried out intending to destroy, in whole or in part, any national, ethnic, racial, or religious group as such, under paragraph e) of Article II of the Convention, include “forcible transfer of children from one human group to another.”

The first attempts to take Ukrainian children to the territory of Russia were made back in 2014 and have become large-scale now. As a result of the criminal actions of the Russian occupation administration in the temporarily occupied Ukrainian territories, more than 1.5 million Ukrainian citizens, including about 200,000 children, were forcibly deported to Russia.

A significant number of orphans and children separated from their families were transferred to Russian families for upbringing.

It is quite obvious that such Ukrainian children will be brought up in a foreign cultural environment that is hostile to Ukraine, and therefore they are doomed to lose their national identity.

Thus, Russia is forcefully reducing the number of the Ukrainian national group, which is tantamount to its partial genocidal destruction.

The deliberate and systematic nature of such criminal practice and the intention to continue it is evidenced by Resolution of the President of the Russian Federation No. 440 of July 11, 2022, on the simplified procedure for obtaining Russian citizenship, which provides for the granting of Russian citizenship in an accelerated manner and according to a simplified procedure to Ukrainian orphans or those of them, who was left without parental care.

Putin deliberately used the internal regulatory act to “legalize” and justify the illegal behaviour of the Russian state, which grossly violates the generally recognized norms of modern international law. This is another convincing confirmation of Russia’s intention to carry out the genocide of the Ukrainian nation.

The forcible transfer of Ukrainian children to Russian families violates not only the UN Convention of 1948 but also the provisions of other important international legal acts, in particular, such as the IV Geneva Convention of August 12, 1949 “On the Protection of the Civilian Population in Time of War” and the Convention of November 20 1989 “On the rights of the child”.

The Convention “On the Rights of the Child” establishes general norms for the protection of children, and the IV Geneva Convention provides special norms designed to protect the rights of children during the war.

The Convention on the Rights of the Child obliges states to “respect the right of the child to preserve his or her individuality, including nationality, name and family ties, as provided by law and without unlawful interference” (Article 8). In addition, the Convention provides that the adoption of children must be based on the national legislation of the state of their citizenship (Article 21) and that children must be brought up in the educational systems existing in the states of their citizenship (Article 28).

According to the IV Geneva Convention, states must take all measures to ensure that children under the age of 15 who are orphaned or separated from their families as a result of war are not left to fend for themselves and, in particular, are obliged to facilitate their care and access to education. Moreover, their education, if possible, should be entrusted to persons with the same cultural traditions. It should be especially emphasized that the Convention provides for the obligation to facilitate the reception of such children by a neutral country (Article 24).

So, as evidenced by the facts, Russia’s actions regarding the deportation of Ukrainian children, granting them Russian citizenship and transferring them to Russian families for upbringing grossly violate the norms of international law, are undeniably genocidal in nature and testify to the Russian authorities committing the crime of genocide against the Ukrainian national group as such.

of the Holodomor Research Institute