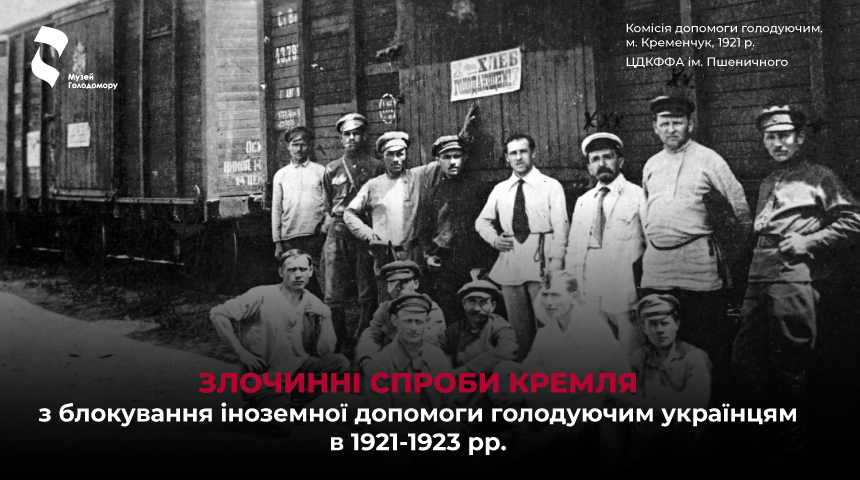 In 1921-1923, the Moscow imperial centre first tested terror with hunger as a weapon to suppress the national liberation movement of Ukrainians. It used an informational blockade of mass famine in the UkrSSR to deprive the starving of food aid from abroad. Therefore, the world community learned about the humanitarian catastrophe in Ukraine late through private sources – from Ukrainian emigrants or representatives of national organizations and religious denominations who had connections with co-religionists and compatriots in the UkrSSR.

In trying to save the starving, foreign philanthropic organizations and foreign denominations faced numerous obstacles deliberately created by the Kremlin, which persistently tried to prevent their activities in Ukraine. It, in particular, is evidenced by the history of tough relations between representatives of the American Aid Administration (ARA) and Soviet government officials. It began with a fruitless petition by the Americans to the authorities in Moscow for permission to visit the South of Ukraine to find out the food situation there. Refusing them, the representative of the government of the RSFSR at the ARA, a member of the board of the VChk, O. Eyduk, categorically stated that there was nothing to go to Ukraine, there was a surplus of grain, Ukraine even helped the starving Volga region.

When, finally, representatives of the American administration, L. Hutchinson and F. Golden, managed to get permission to enter Ukraine, in November 1921, they arrived in Kharkiv with the proposal to extend to Ukrainian territory all types of assistance provided by the ARA to Russian starving based on an agreement with the RSFSR government. People’s Commissar of Internal Affairs M. Skrypnyk, who received the American delegation in the absence of the Head of the Government of the Ukrainian SSR H. Rakovsky, replied that Ukraine urgently needed such assistance, but “the Ukrainian SSR has nothing to do with the mentioned agreement.” He emphasized that Ukraine was a state independent from Russia, and it was necessary to sign a separate agreement with the government of the Ukrainian SSR.

Skrypnyk’s position should not be seen as a manifestation of Ukrainian nationalism. He was a disciplined Bolshevik and obediently carried out the orders of the Central Committee of the RCP(b). The game of sovereignty followed Moscow’s script. The Bolsheviks regarded the agreements of the Ukrainian Soviet government with Western non-governmental organizations as de facto recognition of the UkrSSR by the West, i.e. as the first step on the way to de jure recognition, which would annul the previous official recognition by Western countries of the government of the Ukrainian People’s Republic. The political isolation of the government of the Ukrainian People’s Republic would deprive the enemies of the Soviet government in the UkrSSR of hope for help from abroad.

Apologizing to V. Lenin for allowing the AIA into Ukraine, H. Rakovsky wrote in a memorandum to the head of the Russian Soviet People’s Committee on the organization of food work and grain harvested in Ukraine dated January 28, 1922, that “Ukraine did not make any request for help to Russia or abroad, and various international committees to help the starving were allowed into Ukraine only in January [1922], and even then, after they themselves went there with the consent of the RSFSR.” Knowing the Bolshevik leader’s attitude to the provision of assistance from the “imperialist bourgeoisie”, Rakovsky used appropriate vocabulary in his letter to Lenin. He tried to justify the inevitability of the admission of foreign organizations to Ukraine by the fact that “80% of individual parcels from America via England are intended for various persons staying in Ukraine.” He also commented on the bonuses that the Russian government would have received if foreign packages had arrived in Ukraine through ARA, since “…in the agreement signed with us [the American administration], it was stipulated that all revenues from individual parcels that arrive at ARA go exclusively for the benefit of the starving farmers of Volga”. Agreeing with Rakovsky’s arguments, the Kremlin leaders did not limit the delivery of food and goods packages to Ukraine from North America. At the same time, they stubbornly prevented the organization of free canteens for starving people of the UkrSSR.

“Ukrainian authorities” were in no hurry to promote the activities of the American administration in Ukraine. The representative of the director of the American Relief Administration in Ukraine, Philipp Matius, complained about the passivity and bureaucracy of local officials. “… I arrived in Kharkiv on December 15, 1921, since then I have made every effort to start helping the starving. … And although I have repeatedly addressed Mr. Rakovsky, the Chairman of the Council of Ministers of Ukraine and the Secretary of the Ukrainian Central Committee [Central Committee of the CP(b)U] and the Chairman of the Kharkiv Executive Committee, on this occasion, I have not been given any assistance in this deed. Despite the agreement signed by the Ukraine and the American Relief Administration, many promises have been made to me by government officials, but so far there have been no consequences,” he wrote in a letter dated January 28, 1921. The answer to this was simple. Moscow did not confirm the agreement of the Ukrainian government.

At the same time, the situation in Ukraine remained difficult. It is evidenced by the story of the representative of the International Committee for Aid to the Starving, F. Nansen’s adviser on economic issues, Jean de Lubersac, who recently returned from Ukraine to Geneva (published in the newspaper “New York Times” on July 17, 1922). He reported that “thousands of people die every day near railway stations in cities like Kyiv, Kharkiv, Odesa… Refugees came from villages to these centres and, having arrived there, found themselves without food, dying near the stations. Their bodies were picked up and thrown into the fields, which turned into cemeteries.” De Lubersac also mentioned the enormous crowds of orphans who either perished or were left alone after their parents died of hunger; he also told about the facts of cannibalism, which he personally witnessed. He was surprised by the fact that he encountered the greatest horrors in the Slobozhan region and the Poltava region “in the area between Poltava and Kharkiv, which was very rich”, and individual villages died out by 85% of the pre-war level. In Odesa, according to de Lubersac, bodies were lying on the streets for several days before being buried, that is due to the collapse of the sanitary service.

Despite this, representatives of the Russian authorities continued to try to limit foreign aid to the starving in the territory of the RSFSR. According to reports dated July 13, 1922, the head of the Ukrainian mission in Germany, V. Aussem, in the Central Committee Dopgol VUTsIK, NKID and the Central Committee of the Communist Party (b)U, members of the Russian delegation A. Eyduk, P. Smydovych and M. Krestinsky blocked information about the famine in Ukraine at the International Congress of Committees and Commissions for Assistance to the Starving: “Comrade Smydovych’s first report contained general information about the state of the famine-stricken area, and the figures he cited concerned almost exclusively the Volga region and not a word was mentioned about Ukraine. Although at the executive meeting of the foreign delegation of the 4th Central Council, about which we wrote to you, about our claims, about answers, i.e. Eiduk objected that no report on Ukraine was needed, because Smydovych supposedly had more information and data than “Aussem and Kaliuzhny together”, and that he would certainly cover the situation in all parts of the republic in his report. Eiduk’s following report concerned on the activities of foreign committees and organizations. Moreover, of course, he did not mention Ukraine in a word.

Just thanks to the representatives of Ukraine’s efforts at this forum, the world public knew about the frightening situation in the south of the republic and the necessity to help its population.