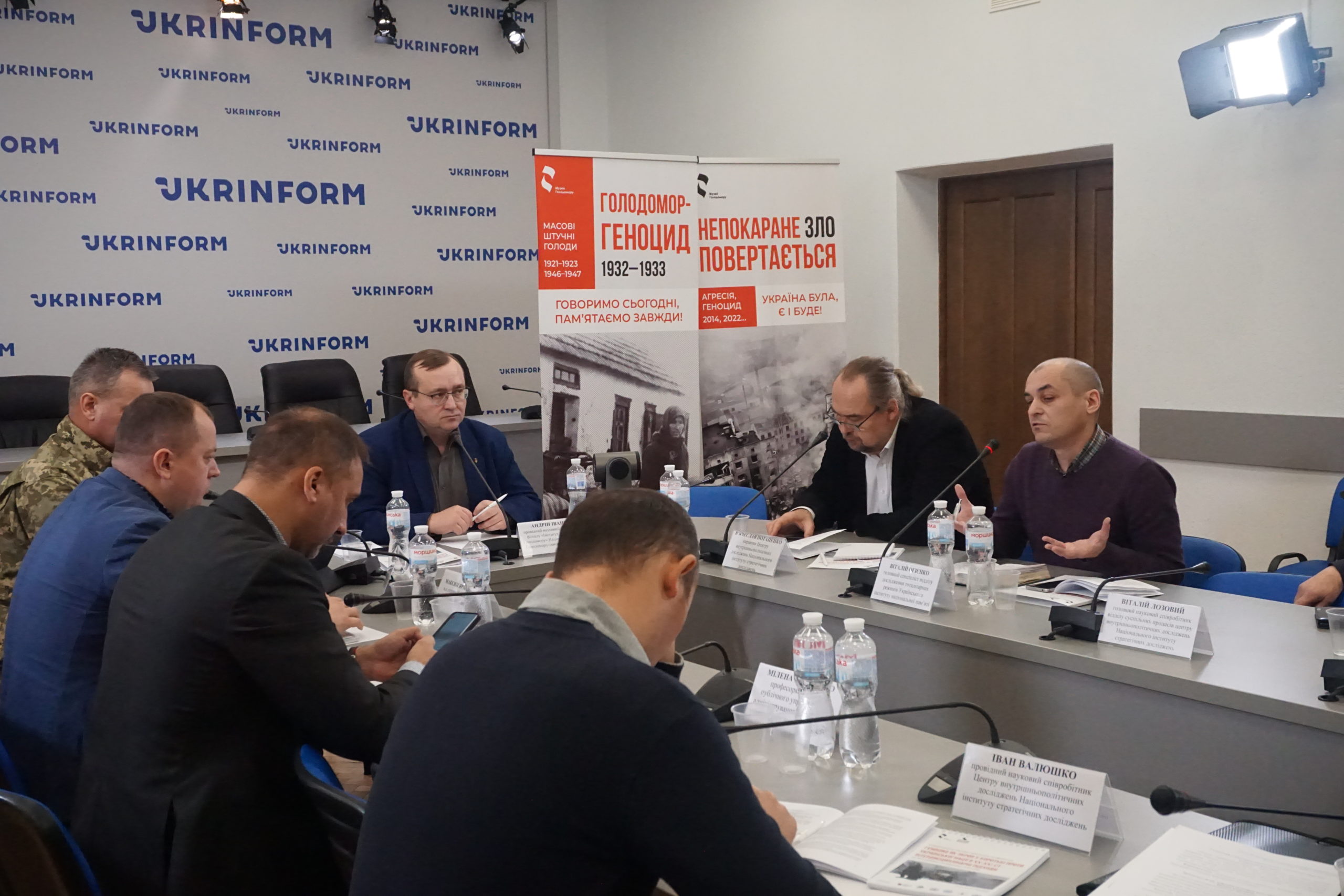 The second plenary meeting of the conference “Genocide as a weapon in the fight against the Ukrainian nation in the XX-XXI centuries: interdisciplinary approaches” took place

On Friday, November 25, the second plenary session of the VI International Scientific and Practical Conference, “Genocide as a Weapon in the Fight against the Ukrainian Nation in the XX-XXI Centuries: Interdisciplinary Approaches,” began at the Ukrinform agency. This part of the conference was dedicated to the discussion of current events, in particular, the legal qualification of today’s actions of the aggressor state in Ukraine and the creation of a special tribunal to hold the Russian leadership accountable.

Moderator Andrii Ivanets, opening the scientific conference, emphasized that the issues, which will be discussed at this event, are “matters of life and death for our nation.” Knowing the history of the Holodomor genocide, we know what awaits us in case of defeat. That is why it is so important to convey this truth to the world, which is not fully aware of Russia’s true intentions.

Greeting the participants of the conference, the Acting head of the Ukrainian Institute of National Remembrance, Maksym Yarmysty, noted that “the same genocidal weapons are used against Ukrainians today as 90 years ago, Russia then and now is trying to subjugate us with the help of genocide.” At the same time, he expressed confidence that “those who commit crimes against humanity should be condemned, and the victims should be honored.” He also reminded that a week ago the Verkhovna Rada had adopted an appeal to the parliaments and governments of countries with a call to recognize the Holodomor of 1932-1933 as an act of genocide of the Ukrainian people. And we can already see the results: Romania, Ireland and Moldova supported Ukraine’s appeal.

Addressing the participants of the conference, Vyacheslav Potapenko, Doctor of Economics, Candidate of Geographical Sciences, and Head of the Center for Domestic Political Studies of the National Institute of Strategic Studies, noted that the lawyers and scientists’ work during this conference should be presented in the form of analytical documents and handed over as a kind of plan actions to the Office of the President and the National Security Council.

Anton Korynevych, ambassador on a special assignment of the Ministry of Foreign Affairs of Ukraine, and agent of Ukraine at the UN International Court of Justice, starting his speech, mentioned the famous lawyer Raphael Lemkin’s work “Soviet Genocide in Ukraine.” He called it “one of the most crucial works for us, Ukrainians, on the subject of the Holodomor”. “The crime of aggression is quite easy to prove, unlike genocide,” Anton Korynevych emphasized. – Especially in such a situation, when we have the recognition and support of all international organizations in this matter. But the problem is that there is a crime, but we don’t have the mechanisms to bring the top leadership of the Russian Federation to justice.”He emphasized that Ukraine, with the support of the international community, should create a mechanism to investigate and hold Russia’s top leadership accountable for the crime of aggression against Ukraine. He expressed confidence that such a mechanism would be created, and the top leadership of the Russian Federation would be punished.

Andrii Kozytsky, Candidate of Historical Sciences, Associate Professor of the Department of Modern and Contemporary History of Foreign Countries at the Ivan Franko National University of Lviv, and Senior Researcher at the Holodomor Research Institute, spoke about the rehabilitation of Stalin’s personality in current Russia and analyzed the purpose of this.

Professor of the Ukrainian Free University (Munich, Germany) Hennady Poberezhny focused in his report on how not to think about the legal qualification of the actions of the aggressor state in Ukraine in accordance with the UN Convention on the Prevention and Punishment of the Crime of Genocide. He emphasized that only mass killings and unheard-of brutality of the Russian army in Ukraine are not enough to qualify war crimes as an act of genocide.

Volodymyr Vasylenko, honoured lawyer of Ukraine, doctor of legal sciences, professor, and leading researcher of the Holodomor Research Institute, emphasized that “by carrying out armed aggression, Russia pursues two goals – to eliminate the state independence of Ukraine and to destroy the Ukrainian nation as such.” “Russia’s armed aggression against Ukraine has all the signs of the crime of genocide and has a genocidal character,” said Volodymyr Vasylenko. – In order to qualify for a crime, it is necessary to prove a special intent. That is the destruction of not a certain number of representatives of the national group, but the group as such. And there is a difficulty in this.” He added that in order to prove genocidal intent, it is necessary to analyze the content of publications and interviews of the top leadership of the Russian Federation, the propaganda content and the systematic and concrete implementation of genocidal acts. It will help to establish the specific genocidal intent of the military aggression.

Valery Udovychenko, colonel of the Security Service of Ukraine, an officer on special assignments of the Department of Counterintelligence Protection of State Interests in the Information Security Sector of the Security Service of Ukraine, drew historical parallels between the Soviet and Putin genocides in Ukraine. He noted that genocide involves the destruction of a national group as such, not the total annihilation of its members. Raphael Lemkin also mentioned that. Valery Udovychenko added that the communist regime used terror as a method of state management, and it is the terror that the modern Putin regime is using now. He also proposed introducing a new term into legal circulation – energicide, used by the Putin regime for terror in Ukraine and its subjugation.

Ihor Solovei, head of the Center for Strategic Communications and Information Security, focused on the issue of Russia’s genocidal rhetoric in the information space. In particular, he mentioned that calls for violence and destruction of Ukrainians were contained in the article “What should Russia do with Ukraine?” by the Russian political technologist Timofei Sergeitsev, published on the website of the Russian state news agency RIA Novosti on April 3, 2022, that is, already during the full-scale Russian invasion of Ukraine.

After the speeches of all the participants of the conference, it was suggested to prepare a summary of the scientists’ main proposals and submit such an analytical reference as a kind of action plan to the higher authorities.