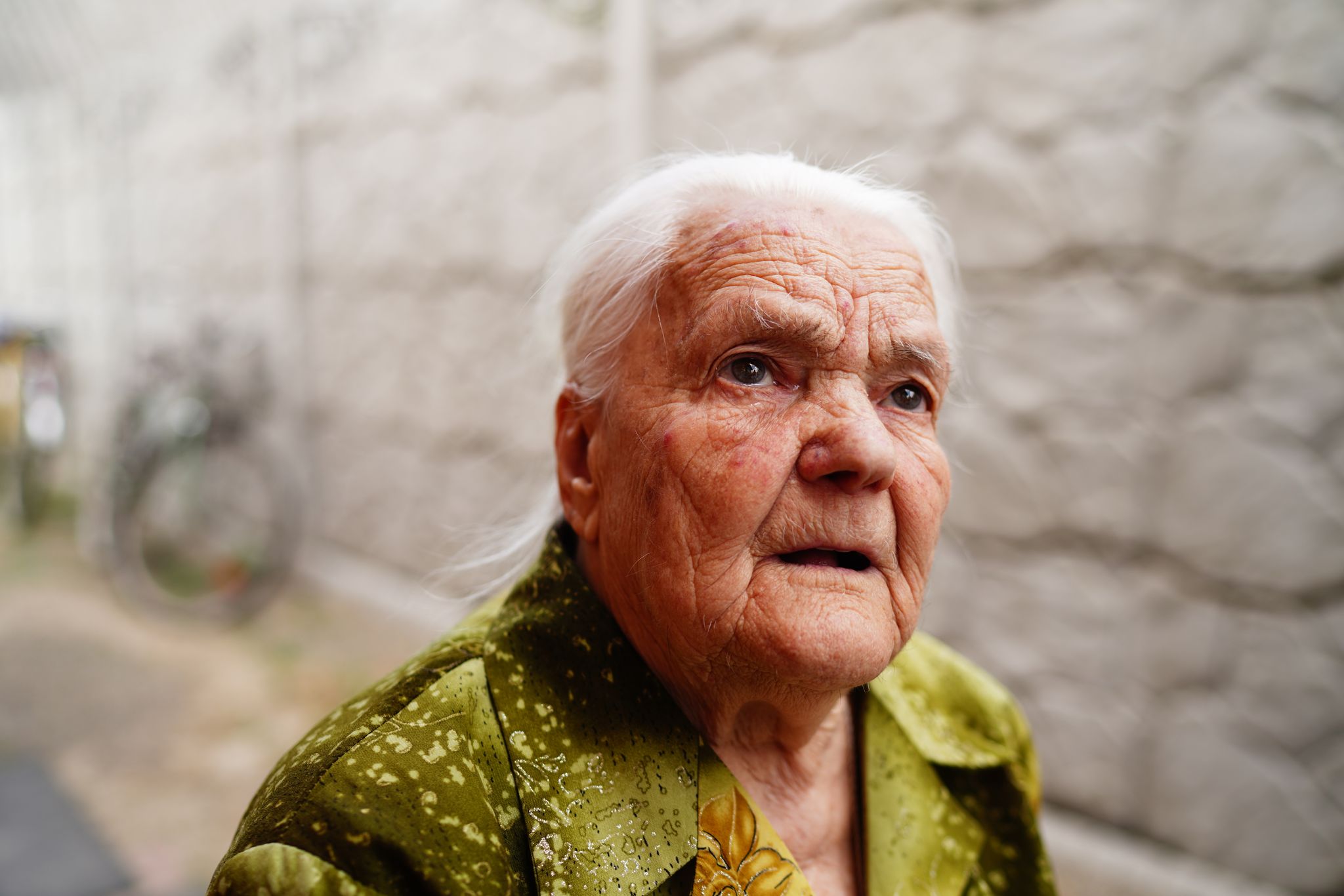 They Took Away Even the Pillows: The Story of Nadiia Koroliova

We present a new story recorded on the expedition together with “Ukrainer” NGO within the project “Holodomor: Mosaics of History”, supported by the Ukrainian Cultural Foundation. Our employees recorded the memories of Nadiia Vasylivna Koroliova in the town of Hnidyn in Vinnytsia region.

When the Holodomor started, Nadiia Koroliova was only ten years old. She was born in the village of Ivankivtsi of Tyvriv district in Vinnytsia region. 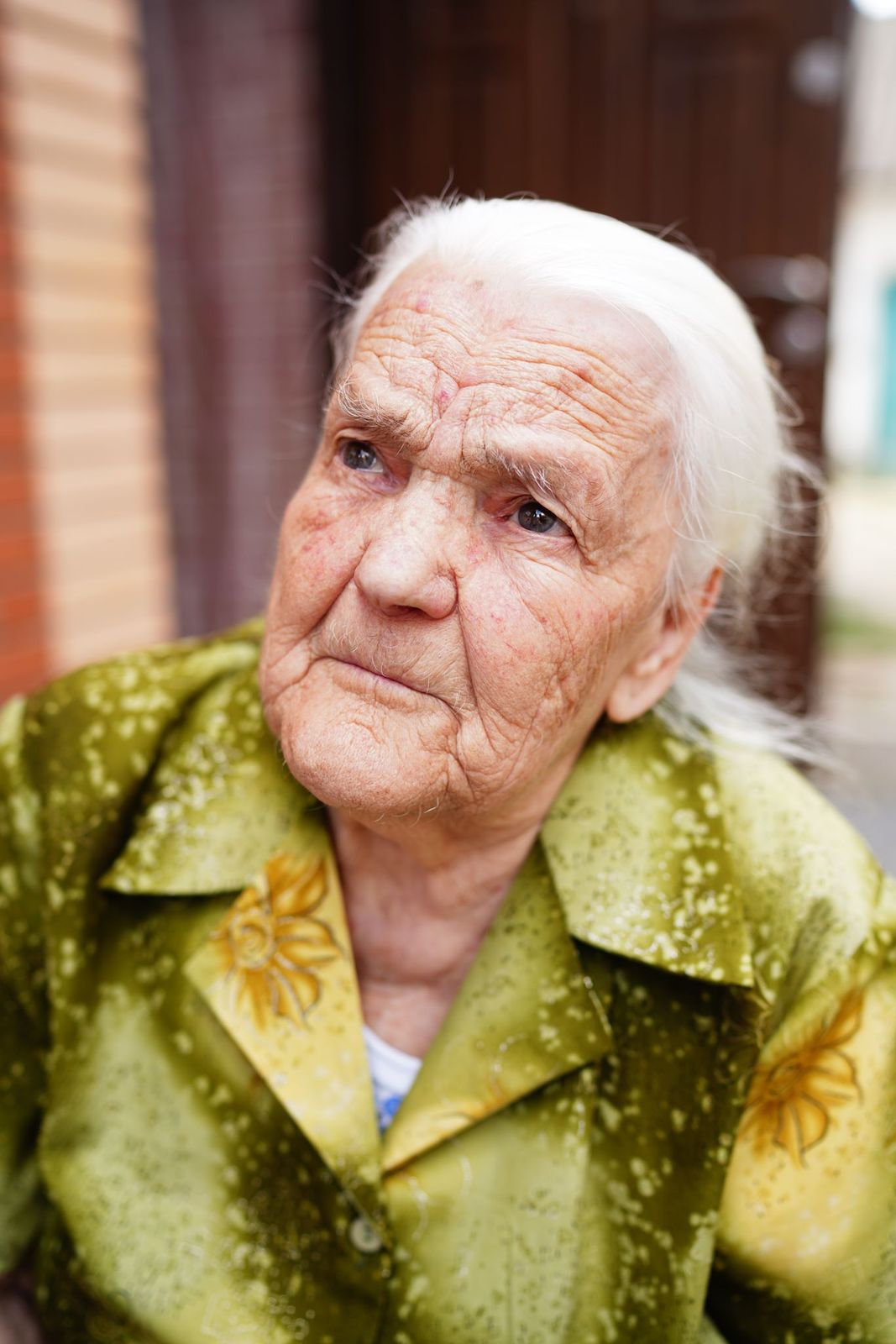 The family of Nadiia was quite wealthy. Her parents earned a fortune by hard work. They owned ten acres of land, a garden, a vegetable garden, a sleigh, a cart, a cow, horses and sheep. All this was taken away with the beginning of collectivization.

Villagers had to to hand over their property, livestock, household equipment and belongings to collective farms. While joining the collective farms was voluntary, very few peasants joined them. Only the poorest went there, and most preferred to run their own farms.

Only the threat of dekulakization or arrest forced people to accept the terms of the Soviet government. Nadiia says that although her family did not go to the collective farm, they paid a huge tax, which, however, was not enough to protect the family from confiscation:

“He paid everything — the tax was imposed on my father — meat, eggs, everything. Where? None. They took the cow away. There was a heifer, we were preparing it to become a cow. They took it for meat. My father was taken away because there was nothing to take away.”

To avoid imprisonment, Nadiia’s father signed documents to pay another tax, but he no longer had the money. So he fled to Luhansk with several other men, where he worked as a miner.

Yet Nadiia, her mother, four sisters and a brother were left without a breadwinner a year before the Holodomor. In the winter of 1932, the confiscations of grain and food began. They were explained by the implementation of the grain procurement plan, which was significantly inflated. Collective farms could not fulfil it, so the Soviet government took away private reserves of farmers.

In the village council, special brigades of people were appointed to seize food. Some went to such work voluntarily, but most did so under pressure: if a person did not agree to join the brigade, they could become a victim of repression. Nadiia recalls that her fellow villagers did not show sympathy during the searches.

“They took away everything, even poured wheat out of the pot. They had sticks of iron, sharp, they walked around the house and poked with these sticks — looking for whether we did not hide wheat, well, bread.”

Activists confiscated even pillows and handkerchiefs. Then they sold them or kept for themselves. Later, during the Romanian occupation, Nadiia’s sister wanted to get back the embroidered pillows confiscated during the Holodomor — they were left by their fellow villager: 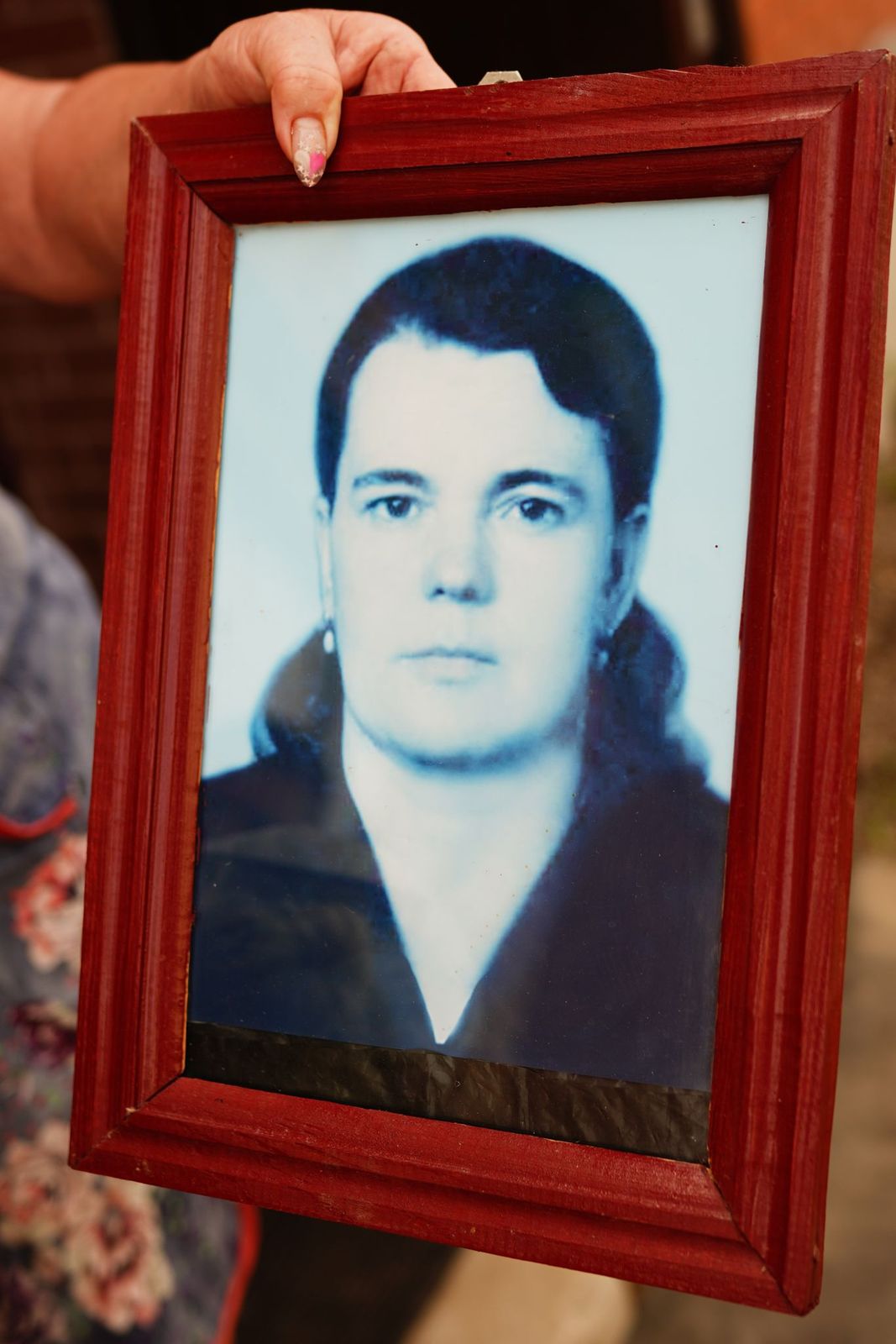 Desperate people sold houses to activists — it was possible to buy the house for ten rubles. Mostly, activists bought them.

Nadiia’s older sister joined a collective farm in her native village and then moved to a larger one set up in Hnivan. For the first day of work she earned two glasses of millet. She gave some of the food to the family: a few glasses of grain, a loaf of bread, and other products. Nadiia’s father also sometimes sent parcels from Luhansk.

During dekilakization, the family’s cattle was taken away, that is why during the Holodomor they ate only what they could grow or find in the gardens. They sowed hemp and beets, mashed them with millet, and cooked soup.

In the spring, they also harvested last year’s frozen potatoes, which remained in the ground. They peeled it, dried the potato itself, ground and baked it into cakes. Also, in the collective farms there were kahats — piles of crops covered with straw or earth for long-term storage. People dug them up and, peeled and ground the vegetables. They baked pancakes from it, which “were good because they were salted”.

In a nearby village, Nadiia recalls, a woman whi collected ears of grain was sentenced to five years in prison under the resolution “On Safekeeeping of State Enterprises, Collective Farms and Cooperatives and the Strengthening of Public (Socialist) Property,” also known as the “Law on five ears of grain”. In her village, people did not go to the field — they were afraid to do so.

“These auhorities came. Let nobody know her! And we survived [the Holodomor]. I wonder how we survived: five children, a mother, and another baby. The mother does not have anything to eat herself, but she feeds the child.”

“When our girl died, the father wrote: ‘What happened at home, that I dreamed that my little finger was beaten off?’ And we say, ‘Tania is dead.’ It was already 1933. We made a box and buried this child.” 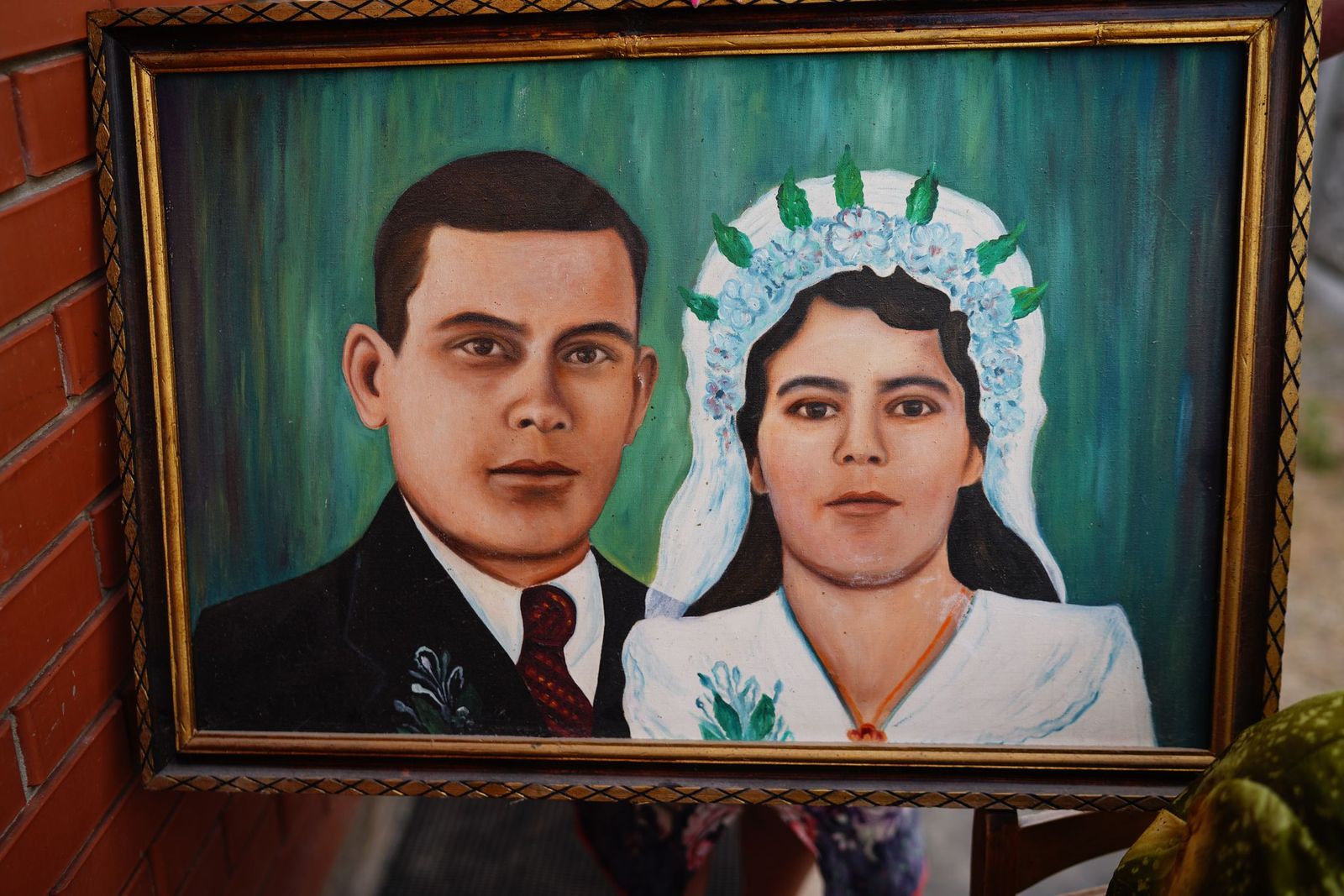 Nadiia’s father returned from Luhansk before the war and went to work on a collective farm to avoid arrest. He, along with other men, raised oxen.

“They did everything. They walked early, oxen and carts were already fed. They brought bread from the cart, brought the sheaves, carried the straw. They worked then like for themselves, so they worked in the collective farm.”

At the same time, the active relocation of Russians to the devastated Donbas cities began in order to develop the region’s industry. Workers at the mines were sought throughout Ukraine, and Nadiia’s sister advised her to apply to the Komsomol in Hnivan in order not to get such a job.

“I wrote the statement, I joined Komsomol because they could take me away on Donbass, and Komsomol members weren’t taken away. I was already accepted then, this collective farm was organized, but they needed to organize a unit. Who? Let Nadiia be a unit head.”

Nadiia, together with the girls she organized, managed to grow 500 quintals of beets per hectare. She was fifteen at the time, and only a few years had passed since the Holodomor.

After the Holodomor, villagers lived in poverty. Sometimes they misused each other’s trust to get the products or goods they wanted. One day, when Nadiia’s sister was standing in a line for a cloth at the village shop, which was opened in Hnivan, she met a woman from her village.

“She came and said to my sister: “Kseniia, your father is dead!” She then leaves this queue, and this woman takes her place, and my sister runs away. But she ran out, and a man from our village came from Hnivan, she ran up to him, and he said, ‘No, it’s not true, because I met him, he went to the oxen farm, and I,’ he says, ‘went to Hnivan.'”

Liquidation of the church

There was no place for religion in the Soviet ideological system. From 1925 to 1929, more than two thousand priests abdicated. Since 1929, bells have been removed from churches, ostensibly for the needs of industrialization.

The wooden church in Ivankivtsi, where Nadiia’s grandfather was the headman, was closed before the Holodomor, and then was completely dismantled.

“And the church was very beautiful, it was wooden, so beautiful that all the people cried when they began to dismantle it. Even there was one man, people said, trampled the icon with his feet. He also took the floor from the church  and it in his house. And as he put it, at once it rotted. The rest was taken away and laid in the store. So what do you think? The one they made themselves remained, and the one made of church boards burned down.”

The second five-year plan in the Soviet Union was declared the “five-year plan for the destruction of religion.” Then the church premises were dismantled or turned into warehouses. Nadiia recalls that a school was later built over the destroyed church. 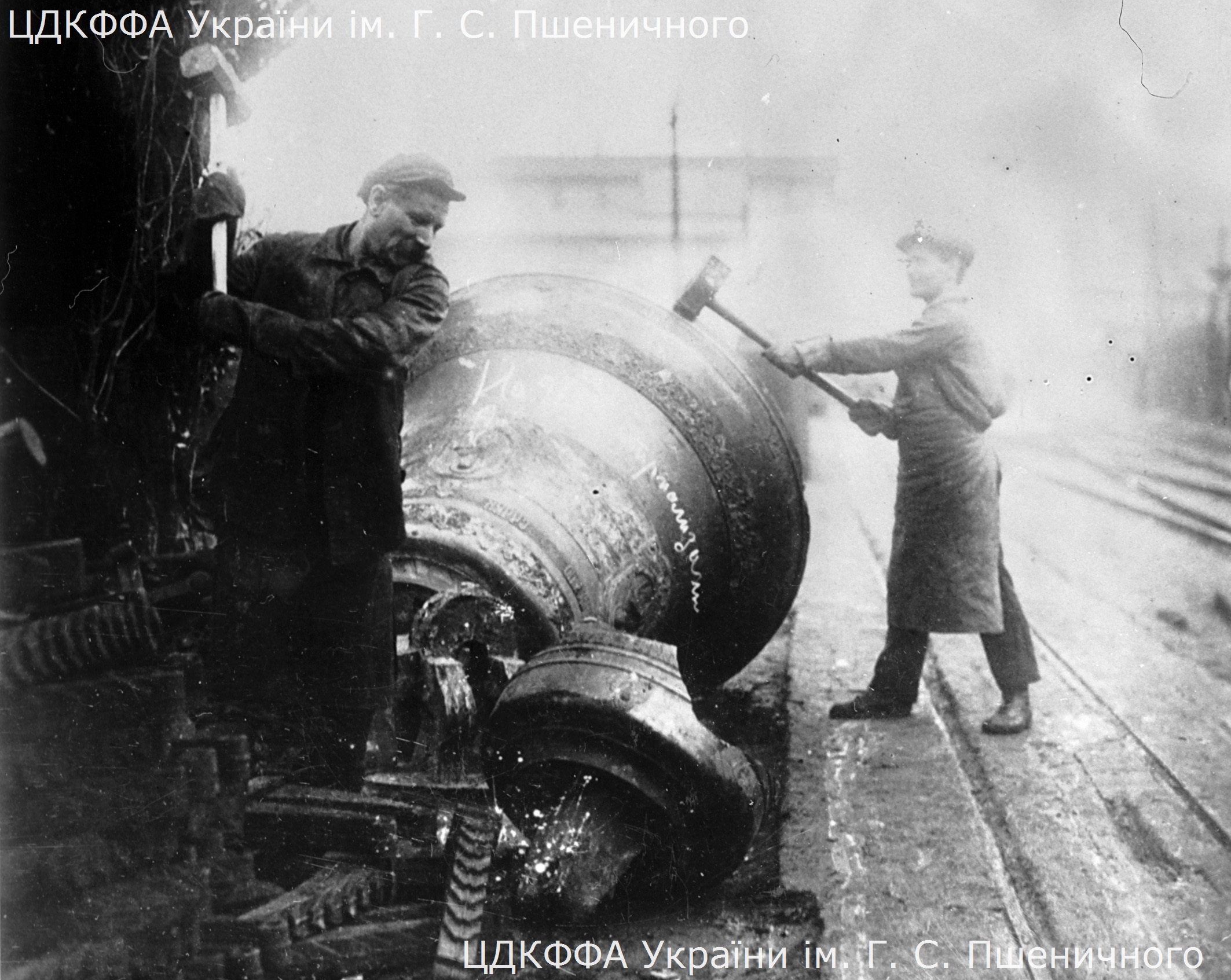 After the church was destroyed, fellow villagers organized holy services in the priest’s house, and he himself was forced to leave the village because of pressure of the Soviet regime. But even despite the bans, the villagers still celebrated Christmas and Easter.

The Holodomor ruined the fates of Ukrainians. Some tried to fight Soviet terror, and some did not withstand it, could not resist, did not survive. Witnesses preserved the memory of those terrible years and share it with Ukrainians and the whole world  so that we do not forget about the crime of genocide.

“I am very sorry. I told my family, and my son-in-law said, ‘I would have shot them.’ I say, ‘You wouldn’t do anything, because you would be shot worse than you would shot someone.’ No one could say anything, no one. We just observed.”