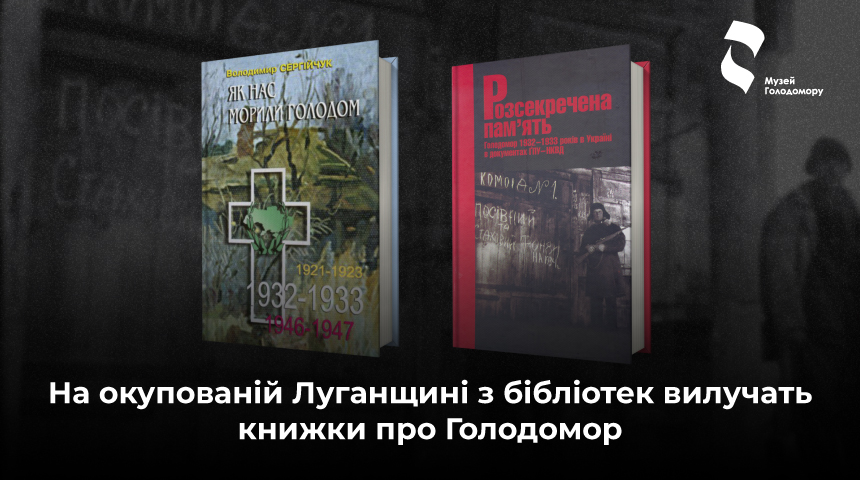 The so-called “Ministry of Education and Science” of the self-proclaimed “Luhansk People’s Republic” issued a directive according to which patriotic books and books on the history of Ukraine should be removed from the libraries of the “LPR”. A list of 365 book titles is attached to the letter that is being sent to educational institutions in the occupied Luhansk region. Among them are “Declassified Memory: The Holodomor of 1932-1933 in Ukraine in the Documents of the GPU-NKVD” (editions of 2007 and 2008) and “How we were tortured by hunger”  by Volodymyr Serhiychuk.

Additionally, in the letter sent by the fake “minosvita,” it is separately emphasized that “in addition to the publications specified in the list, the following are also subject to selection: literature related to the topic of the Holodomor in Ukraine, textbooks, methodical materials, reference books on the history of Ukraine”, as well as books on other topics inconvenient for Russians, such as Ukrainian heroes and the Russian-Ukrainian war of 2014-2021.

It is not a coincidence that the Holodomor topic is mentioned first in the letter because it is about the most irritating events in the history of Ukrainian-Russian relations. For many years now, Russia has been trying to prove with the help of its historians that the Soviet government did not plan any artificial famine, let alone genocide of Ukrainians and that the climatic conditions and “faults on the ground” caused the famine of 1932-1933, and is supposedly a mutual tragedy of the entire Soviet people. That is why it is crucial for the occupant country to get rid of the Ukrainian historians’ works as soon as possible, which destroy the historical myths that Moscow has diligently created for 90 years.

Having seized Ukrainian books from the libraries, the occupiers will impose a false history and their own vision of historical events on the residents of the Luhansk region, they will deny the Holodomor genocide, as they have been doing for many years. Revision of the libraries is exactly what is necessary in order to whitewash Russian aggression and continue to create myths about “one people”.

But we know for sure: the occupiers can destroy the books, but they cannot destroy the truth!