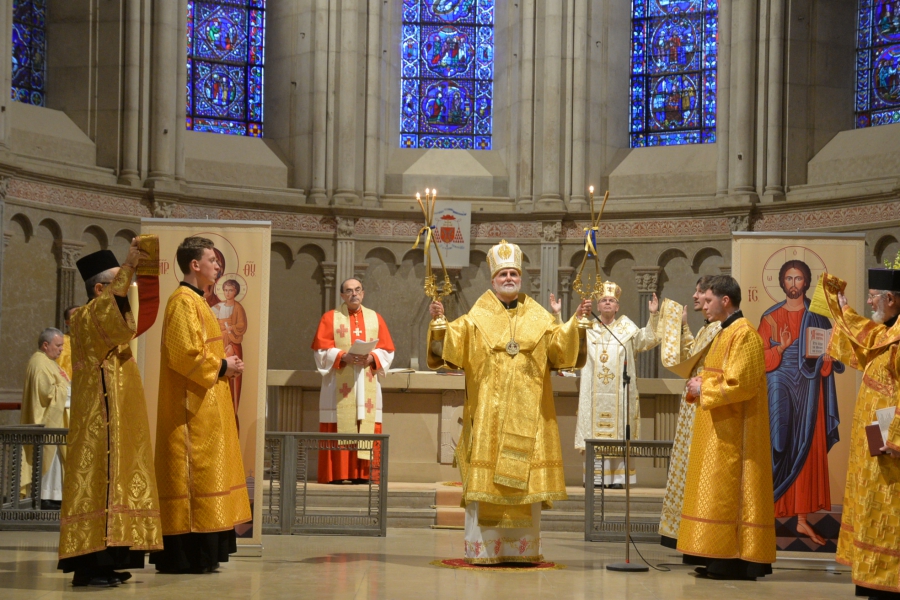 Liturgy in Lyon, France, Timed to the Holodomor-Genocide, Was Recognized as the Best Franco-Ukrainian Initiative in the Region

The Holy Service for the victims of the Holodomor-Genocide of 1932-33 in the John the Baptist’s Cathedra in Lyon was recognized as the best regional Franco-Ukrainian initiative last year by the Independent Public Poll, reports Lyonukraine.

On November 18, 2018, Bishop Borys Gudziak headed the Divine Liturgy on the occasion of the commemoration of the 85th anniversary of the Holodomor. He was co-served by Bishop David Motiuk, the Eparch of Edmonton, Father Mykhailo Romaniuk, the chief vicar of the diocese of St. Volodymyr, and Father Andrii Morkwas, the prior of the local parish of the UGCC.

Archbishop of Lyon, Cardinal Philip Barbaren, preached during the liturgy.

The joint choir of St. Vladimir’s Cathedral in Paris and the Lyon Ukrainian community accompanied the liturgy by singing.

This was the first time for the years of independence when Ukrainians prayed in the main Catholic temple of Lyon. The last time such event occurred during the celebration of the 1000th anniversary of the Baptism of Rus-Ukraine.

Representatives of the Association “Lyon-Ukraine” plan to hand over this award to Bishop Borys Gudziak this year during his visit to France in May.