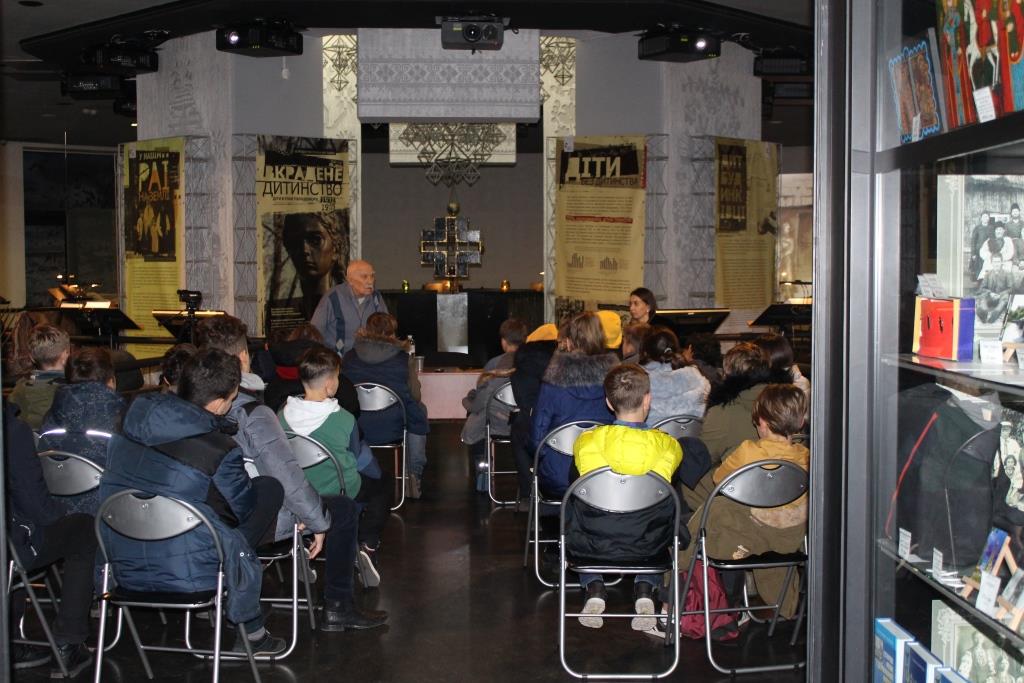 On November 13, 2018, in the Hall of Memory of Holodomor Victims Memorial the meeting with  Holodomor witness Mykola Onyshchenko was held. The pupils of seventh grade of the 181st school of Kyiv and media representatives came to listen to the memories of a person who survived the genocide of 1932-1933.

Mykola Pavlovych Onyschenko suffered genocide in the Roza village, on the outskirts of Berdiansk. From 2014 he survived another trial – he migrated from temporarily occupied territories. Due to Russia’s military invasion of Donbass, he was forced to leave his home in Luhansk.

The spring of 1933 became for Mykola Pavlovych a terrible time, which he remembered by the terrible famine, wandering exhausted people in search of food, who were dying of terrible starvation: “From time to time they said that here one lies, there one lies… Those who picked them up, I do not remember… The famine diminished only when the first buds on the trees appeared … When the grass began to grow, the first goosefoots. We boiled the goosefoots, rasped the roots of trees, and ate them. And then I used to leave the yard, I had a friend … We did not eat goosefoots, but they… Eating the boiled goosefoots, it was normal. Closer to the summer in my aunt’s village, in Novavasylivka, people started to get bread in the mill. Those who hid the bread managed to survive. There were such people, of course… My grandfather also hid, he was in that village… Grandfather created a mill and molts that grain. Everybody was alive, and in my grandfather’s house, and we all were alive… But how many died in our village – I do not know… I know many were dead… In spring, they started to take out this hidden bread… So I witnessed Holodomor. That’s all I saw.”

Mykola Pavlovych is aware that Holodomor is the genocide of the Ukrainian nation. He describes the seizure of products in his native village, which he remembered by a seven-year-old boy: “Bread was taken from hungry people… People heard, there are confiscations in the neighboring village. One day this started in our village, in the village of Rosa, it is 13 km from Berdiansk. We felt it… The tension was felt by everyone… All were frightened. It is difficult to describe. They say that the dogs felt this. From the other end of the village, it was said that they are taken everything out from this man, that they heard the cries… I remember how my mother was running around with a bag, in which there was about a half of bucket of corn. We had an ordinary hut, also covered by clay… We were in the kitchen… A tub with cucumbers stood beside the stove, and the mother brought this bucket. She poured the brine from that cube to the bucket. Then she poured out these cucumbers, then she threw this bag with the grain there, put the cucumbers on the top, put some circles, stones, and here the same confiscators appeared – three of them… Nothing was found. Then he looked at that little tub. He asked, why do these cucumbers are dry? He looked, and there between the cucumbers there was a dry bag. He put his hand there, pulled out a this bag, then cucumbers, stones poured out. He threw this bag behind his shoulders and went out the house. Mother grasped this bag. And she started screaming terribly, lamenting. We have grasped mother’s skirt; he pulled us to the yard. He got off from us. There were two carts standing, people were shouting.”