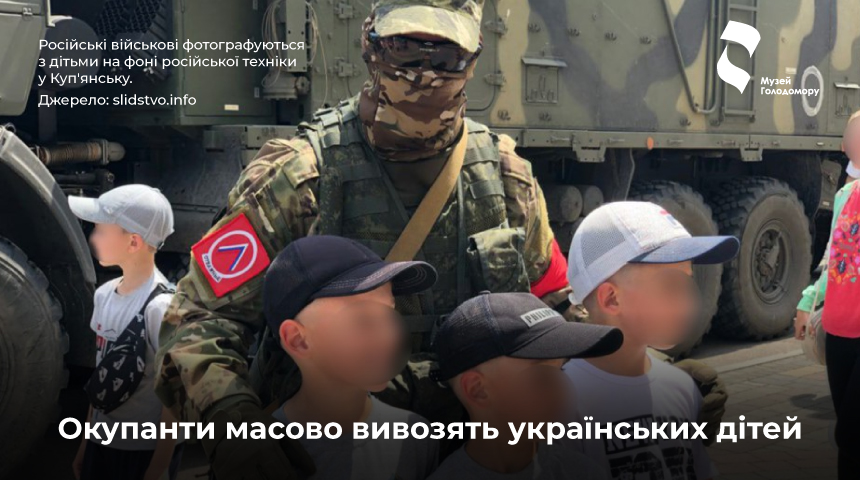 According to various estimates, the occupiers could deport from 260,000 to 700,000 Ukrainian children to the Russian Federation. Kateryna Rashevska, a lawyer of the Regional Centre for Human Rights, made such impressive figures public in Ukrinform.

She emphasized that it is very difficult to determine the final number of deported children, as the Russian Federation does not provide access to this process either to Ukraine or to international organizations. “Most of the minors were relocated with their parents, although this in no way diminishes the Russian crime of deportation and genocide,” Rashevska said. At the same time, due to the filtering measures, a certain number of children could end up on the territory of the Russian Federation without parents or legal representatives because their relatives were detained during the filtering measures or killed by the occupiers. Also among the forcibly removed children are pupils from boarding schools, who in 90% of cases have biological parents or relatives, that is, they are social orphans. They were moved without the consent of their legal representatives.

Russia deports children to at least 57 regions, including remote ones — Sakhalin, Astrakhan, Murmansk, and Dagestan. “I name these regions on purpose because they are either geographically very distant, or culturally distant. The first, the second goes against the generally recognized principle of the best for the child and does not meet the existing standards,” said Kateryna Rashevska.

The fact that Russia justified its actions in some cases with the so-called evacuation from dangerous areas, according to Rashevska, has nothing to do with evacuation. Because one of the main principles of such an evacuation is the consent of the state of citizenship of the children, and Ukraine did not give such permission. At the same time, a detailed information certificate must be drawn up for each child in such a case and submitted to the International Committee of the Red Cross. Russia did not do this in any case.

According to the expert, international organizations such as UNICEF, the Hague Conference on Private International Law, and the Office of the UN High Commissioner for Human Rights have already drawn attention to this situation, which pointed out that the deportation and forcible transfer of Ukrainian children to Russian families do not even comply with international conventions, nor international humanitarian law, nor the principle of the best interests of the child.

It is worth mentioning that, according to the Convention on the Prevention of the Crime of Genocide, the forcible transfer of children from one group to another is one of the signs of genocide. Criminals will definitely be judged for this.