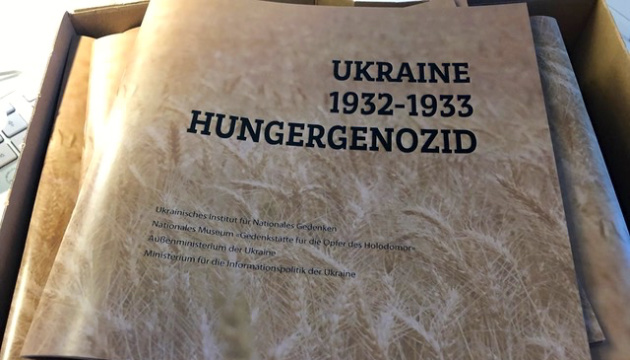 Ukrainian activists together with German like-minded people reminded the politicians of the Federal Republic of Germany of the need to recognize the Holodomor as genocide, as this issue may be considered in the Bundestag this year.

This was reported by an Ukrinform correspondent.

“We have written a letter to each member of the Petition Committee for Recognizing the Holodomor as Genocide of the Ukrainian People. It was signed by 137 Ukrainians and Germans, who also supported our initiative,” one of the initiators of the campaign, Liubov Pokotylo, said.

The letter was sent to all 28 members of the Petition Committee of the German Parliament, as well as to four government officials involved in the matter. The message includes a brochure of the Ukrainian Institute of National Memory, which tells about the Holodomor in German.

As reported, a year ago a petition to recognize the Holodomor of 1932–1933 as an act of genocide of the Ukrainian people, initiated by Natalia Raifenstein-Tkachuk, received more than 73,000 signatures on the Bundestag website (with the required 50,000). The Committee on Petitions of the German Parliament considered it on October 21. At the same time, the German Foreign Ministry actually opposes the recognition.

The committee must decide whether to submit the issue to all deputies. In order to get acquainted with the subject, a three-day visit of the chairman of the Petition Committee of the Bundestag Marian Wendt to Ukraine was planned for the beginning of May, but due to a pandemic the trip was canceled. The Embassy of Ukraine hopes that it will take place in the fall.