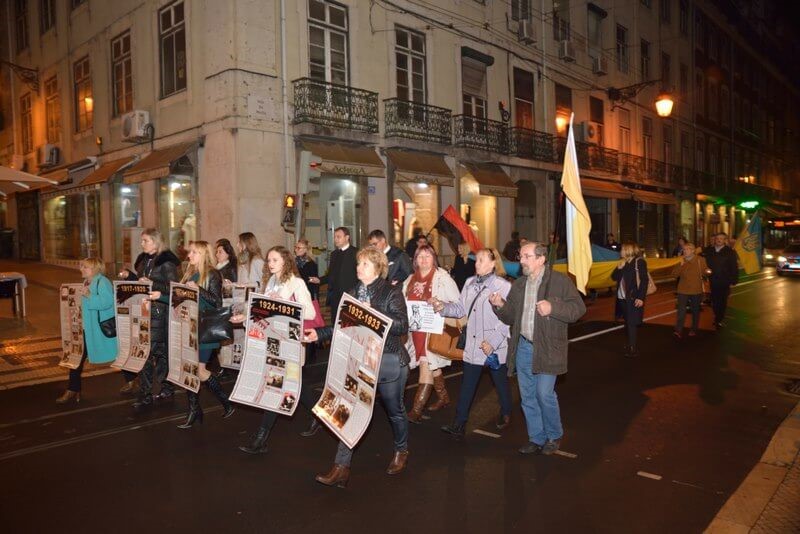 Ukrainians in Lisbon honored the memory of the Holodomor victims of 1932-33 in Ukraine, reports the official online resource of the Union of Ukrainian of Portugal.

In Mosteiro dos Jerónimos, was a prayer service dedicated to the victims of the Holodomor of 1932-1933 in Ukraine, headed by Reverend Hilarion, Archbishop of the Rivne and Ostroh UMP of the Kyiv Patriarchate, as well as the priests of the Ukrainian Greek Catholic Church and the Orthodox Church of the Ecumenical Patriarchate.

In addition to this in evening on November 25, 2017, the “Peace Walk” campaign was organized. The event was attended by Ambassador of Ukraine in Portugal Inna Ognivets, Head of the Department for Foreign Ukrainians of the Ministry of Foreign Affairs of Ukraine Larysa Dir, Head of the Union of Ukrainians in Portugal Pavel Sadokha, Coordinator of the Ukrainian Greek Catholic Church Ilya Figol, who, together with the priests of the UGCC, held a memorial service at the church of Santo António.

Similar events were held not only in the capital of Portugal, but also in other cities where Ukrainian communities are.