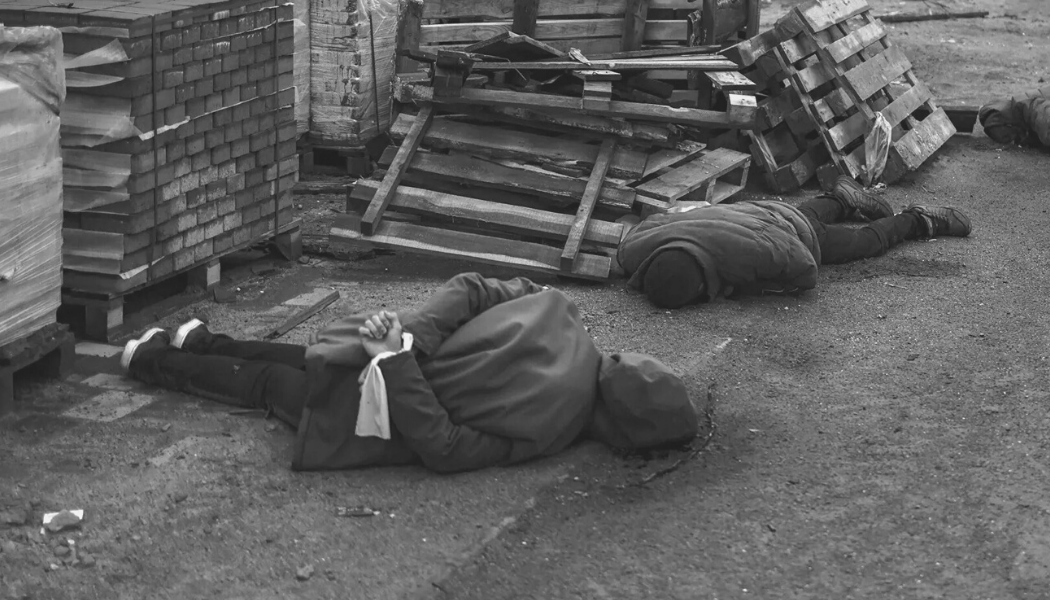 “What led to the Bucha massacre?” Historical Discourse on the False Third Rome, the Russian Crowd, and Black Propaganda… »Part I.

“The memorable events of history are the visible effects

of the invisible changes of human thought.”

Ukraine is not Russia… There is a big gap between us. The abyss of civilization that separates Ukrainians from Russians is especially noticeable in worldviews and cultural aspects. War as a litmus test showed who is who; on what basic principles were the Ukrainian and Russian states built, what patterns of behavior were offered to their citizens by the leaders of public opinion of both nations.

After the tragedy in Bucha, the civilized world saw and was horrified by the “real Russian people,” who turned the Russians into the use of manipulative technologies of total propaganda. To the Russian masses (without individuality, critical thinking, with indoctrinated consciousness), Putin’s propaganda never tires of repeating that all of them (“soldiers of the Third Rome”) must defend Holy Rus’ and “sacred statehood. The phrase-marker Holy Rus’ was used in Russia for the psychological mobilization of the regime supporters in tsarist times. The Russian state convinces its citizens that they are spiritually superior to other nations by the very fact of their birth; and therefore, ostensibly, have the right to teach and punish all their neighbors. Another reincarnation of the idea of the Third Rome in the form of an ideological doctrine that justifies the “legitimacy” of Putin’s aggression against Ukraine is happening before our eyes. Russian propagandists also use the idea of a “New Jerusalem” to justify military, political, and religious aggression against the Ukrainian state.(author’s note The New Jerusalem is the Heavenly City that the Lord will reveal at the end of history). However, instead of the Heavenly City, which is supposed to bring blessings to all people on Earth, the Russians have something completely different. In the 1940s, there was already a Russian-created New Jerusalem near Moscow, the Gulag concentration camp where “enemies of the people” were kept.

And the war began, the war of darkness and light… War with a horde of orcs, a faceless and impersonal crowd. More than a century ago, French psychologist and sociologist Gustave Le Bon rightly remarked that “the crowd can not be governed by rules based on purely theoretical justice, but must look for something that can impress and capture it” (Psychology of Mass. Textbook /  Raigorodsky D. Ya. S. 17). Putin and his allies molded a “new Russian crowd,” which was galvanized by the idea of “restoring the USSR,” then – the destruction of “Ukrainians-Bandera,” “liberation of Russian speakers from Bandera,” and finally “denazification.” It is worth emphasizing that the speaker-propagandist always uses markers, loud statements, exaggerations; he repeats, not proves, refutes, not explains.

The Russian people were mentally formed within the Russian “community.” Collectivism, the tendency to “be like everyone else,” is one of the main elements of the Russian people’s worldview. Russian collectivists often humbly, elsewhere joyfully, and zealously accepted all those propaganda markers and stereotypes that fit into the paradigm of their “communal” thinking. In the second half of the twentieth century, Russian logician and philosopher Alexander Zinoviev claimed that “communism got successful in Russia, thanks in part to the national character of the Russian people – due to their weak capacity for self-organization and self-discipline, their propensity for collectivism as a gift of destiny or a gift from above, and not as a result of their own efforts, creativity, initiative, risk “(Zinoviev AA The death of Russian communism. P. 22). A separate individual, his actions will always be different from an individual in a crowd. That is why the servants of the regime, the skabeevs, the solovyovs, and the simonians unified so stubbornly the consciousness of the Russian masses and tried to do it with the Ukrainians.

Since ancient times, the ideal of Western philosophy and public opinion has been the integrity of the human soul, overcoming its internal division. Most Russians are unaware of such problems. The dichotomy of the “Russian soul” is well visible. According to modern Ukrainian historian Andriy Kozytsky, the main dilemma of Russian history is that the Russian state forces its subjects to remain slaves, but at the same time, expects them to be able to compete on an equal footing with free people in Western democracies. That leads to axiological schizophrenia, and devaluation of all spiritual, moral, and aesthetic values.

The formation of the bizarre worldview of Putinist Russia took place in an atmosphere of total lies. The leaders of totalitarian, authoritarian regimes always receive distorted information from their subordinates: henchmen are afraid of their dictators and try to please them with information. Putin has fallen into a vicious circle of false ideas, inventing “Ukrainian Nazism.” The President of Russia proclaimed anti-scientific theses about Ukraine and Ukrainians to the whole world, his henchmen clapped their hands, and propagandists weaved bizarre details into their dictator’s narratives. Soon, Putin himself believed that everyone around him shared his views on Ukrainians, who allegedly did not exist. Ultimately, the impoverished (both mentally and financially) Russians went to war. Putin’s propaganda completely “turned off” the function of critical thinking for the Russian masses. Poisoned by stories about “Ukrainian Nazis,” the Russian military was ready to kill, torture, rape, torture, and rob us.

On February 24, 2022, Russia vilely, without declaring war, invaded the territory of the sovereign state of Ukraine. In one of the main areas of the offensive, Russian strategists decided to move to Kyiv through the Chornobyl zone. This area is a planetary zone of pain, suffering, and death. No one but the adherents of the idea of ​​the Third Rome would dare to enter the Chornobyl zone with heavy equipment, which creates a deadly danger by removing radioactive smoke. The Russian masses have been accustomed for centuries that the “emperor” knows how to act better, and they should not think. Historically, the Russians defined their state through the dichotomy of “emperor” and “subjects” (they still do). So, no one refused to dig trenches in the “Red Forest” – an area with high levels of radiation pollution.

The question arises that I did not find the answer to at one time: “Didn’t the communist totalitarian regime deliberately provoke the Chornobyl catastrophe? In particular, as one of the plans to save the Soviet empire?” And since human life is not a basic value of totalitarian, authoritarian regimes (it is a value in democracies), Soviet leaders could have made such a decision. The whole history of Russian statehood has been one long list of wars, robberies, looting, leveling the rights and freedoms of the individual, imposing on others nothing distorted perception of reality. Some Russians may be aware that they and their country are doing evil but justify themselves by saying that they cannot influence anything.

At the end of February 2022, the terrible Muscovite darkness enveloped the heart of Ukraine. The enemy approached Kyiv. The eternal dream of the rulers of the Moscow ulus was to come true – the conquest of the “Mother of Russian Cities.” The Muscovites stubbornly call Rus’-Ukraine the “Old Russian state,” trying to get their start from there (Ways of understanding the past: Methodology and theory of historical science. Moscow, 2011)(. Rus’-Ukraine was an enlightened, cultural, educated state of Europe. It is worth noting that Scandinavian written sources called Rus’ a “Country of cities.” Kyiv (Kyiv-Kenugard, as well as Constantinople-Miklagard) was one of the largest guards in Europe.

Honore de Balzac called Kyiv an “eternal city.” Throughout its existence, it has been the main urban center of the Eastern European region, the center of the formation of the Ukrainian nation. Officially, Kyiv was founded in 482, there are historians who believe that Kyiv is even 2,500 years old. In the churches of Sofia, the beginning of life in Sofia – the soul of Ukraine. Today, the Kyiv-Pechersk Lavra especially needs liberation from Muscovite symbols. In the minds of Ukrainians, Kyiv is associated with the words veche, community, Ruska Pravda, and others. Putinists have the word – I want. They have failed to cling to our millennial history, philosophy, and culture, so they are ruthlessly destroying what they did not create. They kill those who cannot fall to the level of the lowly (vile without moral norms).

Modern martyrs of Bucha, Borodyanka, Irpin, and Vorzel… accepted a horrible death from the Russian occupiers and became an invisible defensive wall of Kyiv. The Armed Forces of Ukraine are visible and glorious. The Russian occupiers have got lists of soldiers, activists, and patriots they go to kill deliberately, so they have no excuse. And if the “isolated individual” realizes that he cannot rob a supermarket, or someone else’s house, torture and kill women, and children, then a zombified one of his own free wills, or not – he can. Russia’s aggression against Ukraine in 2022 refuted another myth about the “mysterious Russian soul.” The world has seen Russian murderers, rapists, and looters.

The diabolical Russian crowd, which cannot be called an army “led” by Putin, continues the war…

Finally, I would like to address those considered “world leaders” today. Today you are afraid to “close the sky,” to hand over tanks and planes to Ukrainians. You are terrified of World War III. Isn’t it there? Yes, you are helping us, but in Ukraine, in addition to war crimes, there is a crime of GENOCIDE!

STOP THE WAR! STOP THE GENOCIDE!