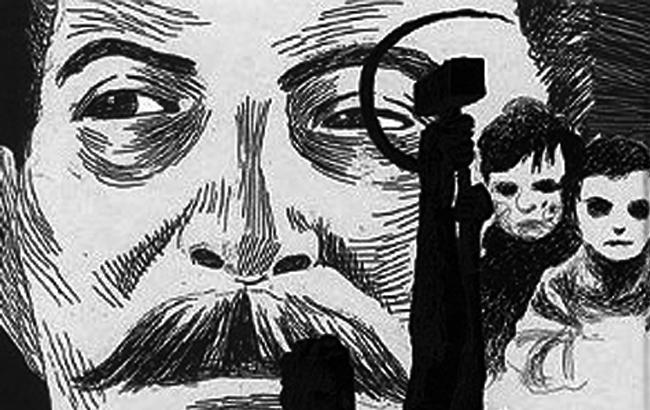 Why the Holodomor is genocide under UN convention: On Anne Applebaum’s Red Famine

Does the man-made Great Famine of 1932–33 in Kremlin-ruled Ukraine fit the criteria of genocide? James Oliver argues that it definitely does in his review of the new book Red Famine: Stalin’s War on Ukraine by Pulitzer Prize winner Anne Applebaum. The book’s merit, he notes, is the return to the original notion of “genocide” as a policy aimed at the destruction of social ties, particularly solidarity, within the group, rather than just physical elimination of its members. This is exactly what the Stalinist regime was doing to Ukrainians in the 1930s, Oliver observes.

Between 1932–33, Stalin sought to wipe out the very concept of an independent Ukraine by targeting its peasantry and its leadership. In many senses, Lenin and Stalin carried on the traditions of the Tsarist empire in seeking to deny the Ukrainians their own identity, history, language, and culture.

But Stalin’s application of this tradition proved to be far more lethal than anything the Tsars ever conceived. At least 4 million (possibly up to 7 million) Ukrainians perished in a deliberate genocide where starvation, terror, and deportation were the main weapons of choice for Stalin’s regime. For decades, the realities of the Holodomor were and still are covered up by the Kremlin in a deliberately orchestrated fog of disinformation concocted by Stalin himself. It has been echoed not just in Walter Duranty’s nefarious New York Times dispatches but also in the numerous pro-Soviet lackeys who repeatedly attacked and vilified anyone in the Ukrainian diaspora who spoke of the Holodomor and the brave few journalists such as Gareth Jones, Malcolm Muggeridge, and Rhea Clyman who reported on the Soviet genocide against the Ukrainians at the time.

Anne Applebaum’s new book Red Famine: Stalin’s War on Ukraine is both a vindication of what Jones, Muggeridge, and Clyman saw and those survivors who have recorded their testimonies speak of and also a repudiation of Stalin’s apologists. She places the Holodomor into the context of Ukrainian history. It is essential reading though not for the light-hearted as her chapters on the peak of the famine are as grim as they are illuminating.

There is one issue though: multiple book reviews (most notably, Sheila Fitzpatrick’s review in the Guardian) have left a degree of confusion as to what Anne Applebaum’s position on the Holodomor being genocide is and by what criterion she uses. In light of this, it is worth briefly stating her arguments for you to decide.

Applebaum’s book makes very clear that the famine was not the work of bad weather nor crop failure nor even the collectivization drive though she argues its chaotic implementation helped create conditions preparatory to famine. But the main causes of the famine she argues are all artificial, such as the forced confiscation of all food from the homes of Ukrainian peasants, the blacklists, and the roadblocks.

As Professor Roman Serbyn has pointed out numerous times, although the famine is arguably the most notable aspect of 1932–33, it is not the whole story of the genocide against the Ukrainian nation. It was entwined with the destruction of Ukrainian academics, religious figures, writers, artists—those that could be associated with being a part of a Ukrainian cultural elite.

“Stalin,” Applebaum writes in her conclusions, “did not seek to kill all Ukrainians… but Stalin did seek to physically eliminate the most active and engaged Ukrainians, in both the countryside and the cities. He understood the consequences of both the famine and the simultaneous wave of mass arrests in Ukraine as they were happening. So did the people closest to him, including the leading Ukrainian communists.”

The Holodomor took place before the word “Genocide” was formally coined. We associate the word’s invention with the Jewish lawyer Raphael Lemkin, who was inspired to create the term (out of the Greek term “Genos” meaning race or nation and from the Latin term “cide” meaning killing) based on the history of his native Lviv and what happened in World War II along with what the Armenians endured in World War I.

“Generally speaking,” Lemkin wrote in his work Axis Rule in Occupied Europe, “genocide does not necessarily mean the immediate destruction of a nation, except when accomplished by mass killings of all members of a nation. It is intended rather to signify a coordinated plan of different actions aiming at the destruction of essential foundations of the life of national groups, with the aim of annihilating the groups themselves.

The objectives of such a plan would be disintegration of the political and social institutions, of culture, language, national feelings, religion, and the economic existence of national groups, and the destruction of the personal security, liberty, health, dignity, and even the lives of the individuals belonging to such groups.

Lemkin applied this understanding of genocide to the Sovietization process in Ukraine and the Ukrainian famine. If you haven’t read his 1953 essay “Soviet Genocide in the Ukraine,” I urge you to stop here and do so. Lemkin is mentioned by Applebaum, who writes that had the concept remained but an idea in the minds of thinkers like him, “there would be no argument today; according to Lemkin’s definition, the Holodomor was a genocide—as it is by most intuitive understandings of the word. But the concept of Genocide became part of international law in a different context.”

The Soviet Union had a hand in the shaping of the UN Convention on the Prevention and Punishment of the Crime of Genocide. Applebaum writes that UN documents entail that genocide means the “physical elimination of an entire ethnic group” in a manner akin to the Holocaust and that under this strict understanding the Holodomor does not qualify as genocide because “the famine was not an attempt to eliminate every single Ukrainian.”

It is true that the USSR lobbied to remove the concept of destroying political groups as genocide from the final UN documents because under such terms the Soviet attempts to annihilate so-called “Kulaks” would qualify as genocide, and that the post-war USSR attempted to portray that only Nazism and such similar ideologies could carry out genocide (and the whitewashing of Soviet atrocities and genocides still persists).

But this is where one can disagree with Applebaum. Article 2 of the final UN document, the Convention on the Prevention and Punishment of the Crime of Genocide, reads as follows:

“In the present Convention, genocide means any of the following acts committed with intent to destroy, in whole or in part [emphasis added], a national, ethnical, racial or religious group, as such:

(a) Killing members of the group;

(c) Deliberately inflicting on the group conditions of life calculated to bring about its physical destruction in whole or in part;

(d) Imposing measures intended to prevent births within the group;

(e) Forcibly transferring children of the group to another group.”

Even if you accept that the UN definition is limited in its scope, you can still argue that what Stalin did to the Ukrainian people still meets its requirements—especially if you include what Lemkin talked about.