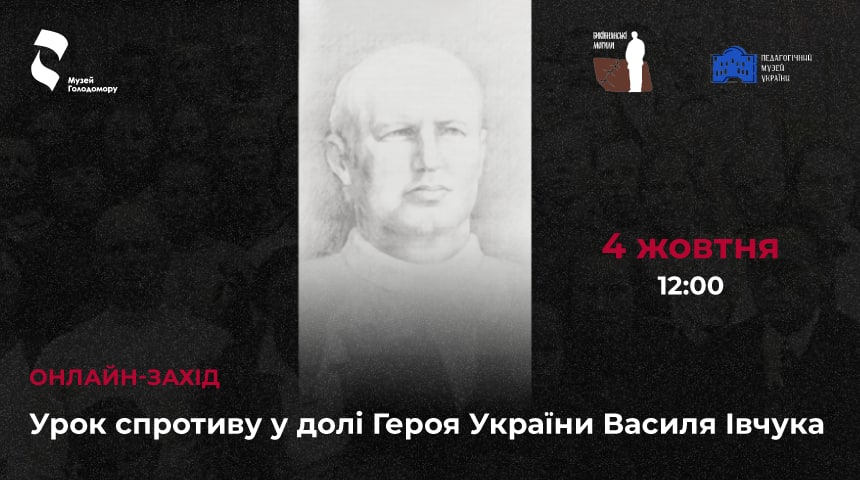 In the terrible years of the Holodomor of 1932-1933, the best human traits were manifested: mutual aid, sacrifice, and kindness. Despite the threat to life, some brave people saved those who had it even more difficult. One of these benefactors was Vasyl Ivchuk, the director of the Dudarkiv school.

On Tuesday, October 4, 2022, the National Historical and Memorial Reserve “Bykivnia Graves”, the National Holodomor-Genocide Museum and the Pedagogical Museum of Ukraine invite you to join the cultural and educational online event “Lesson of resistance in the fate of the Hero of Ukraine Vasyl Ivchuk”.

The talented teacher Vasyl Ivchuk achieved considerable success in his educational and educational work with his hard work as the director of an incomplete secondary school in the village of Dudarkiv, Boryspil district. In 1932, when he was appointed a school director, he received the first accusation of “counter-revolutionary activity”, and due to the lack of any evidence, he was released from custody.

During the Holodomor, to save the children, the director organized an ыгиышвшфкн farm at the school, which made it possible to provide free breakfasts to schoolchildren. Thanks to his efforts, about 200 students were saved from starvation.

Vasyl Ivchuk was arrested for the second time on May 17, 1938, and accused of participating in a counter-revolutionary insurgent organization and anti-Soviet propaganda. On October 2, he was shot in one of the Kyiv prisons, and his body was taken to the Bykivnia Forest.

In 2007, Vasyl Ivchuk was posthumously awarded the title of Hero of Ukraine.

Tetiana Sheptytska, the Deputy General Director for scientific work of the Bykivnia Graves National Museum, researcher Mykola Bryvko, researchers of the Reserve, Yulia Kotsur, Deputy Director General of the National Holodomor-Genocide Museum, and Oleksandr Mikhno, director of the Pedagogical Museum of Ukraine, will take part in the commemorative event.

During the event, Yulia Kotsur, Deputy General Director of the National Holodomor-Genocide Museum, will talk about Vasyl Ivchuk, who saved human lives in inhumane times, and the importance of researching the stories of philanthropists who were deliberately hidden and silenced by the communist totalitarian regime.

You can join the meeting in Zoom using the link: