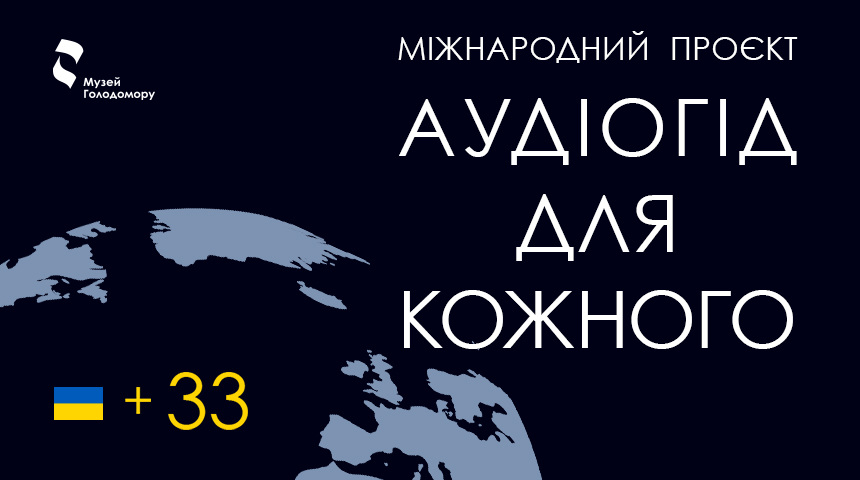 About the Holodomor in 33 Languages: Presentation of International Project “Audio Guide for Everyone”

On November 24, at 1 pm, the National Museum of the Holodomor Genocide will present the international project “Audio Guide for Everyone”. From now on, visiting the museum has become more comfortable for foreigners from all over the world.

The “Audio Guide for Everyone” project offers a tour in 33 languages, perhaps the largest language variation of any museum in the world. For 1.5 years, the museum staff, together with volunteers, NGOs and embassies, created, translated and recorded the audio tour and signs for the exhibits.

You can be accredited by following the link.

The following guests are invited to the presentation:

Olesia Stasiuk, Director General of the National Museum of the Holodomor Genocide;

Inna Kniurene, Cultural Attaché of the Embassy of the Republic of Lithuania in Ukraine.

Katarina Schaupp-Karmann, First Secretary, Head of the Department of Culture, Education and National Minorities of the Embassy of the Federal Republic of Germany in Ukraine.

Representatives of the Consulate of Kenya, Foreign Ministry, ICIP.

“People responded very warmly to our requests for help with translation and reading of texts. Some volunteers (for example, Stefan Luchpak from Romania, Christian Weise from Germany, Asaf Bartov from Israel) came to Kyiv only to record the tour. Some recordings were made in professional studios abroad, and Italian and Persian audio guides were read by popular announcers Salvatore Mazza and Mahmudi Nima,” Olesia Stasiuk, Director General of the Holodomor Museum, said.

The scale of the project is impressive: 20 organizations and 135 people worked on the audio guides. For 1.5 years, 170 hours of audio were recorded.

“In the process of working on the project, many translators have adapted the terminology related to the Holodomor, as it has not been developed in all languages ​​before. This will make the history of the genocide of Ukrainians closer and more accessible to foreigners. In addition, sometimes native speakers did not understand the names of some museum exhibits at first, and their task was to explain these words to our visitors,” project curator Larysa Artemenko said.

You can use the museum audio guide from November 24.

The National Museum of the Holodomor Genocide honors the memory of millions of Ukrainians killed by the genocide of 1932 and 1933. Many foreigners visit the museum every day, and bringing true information about the Holodomor genocide to each visitor in their native language with the help of audio guides will allow them to learn about the crime of the totalitarian regime and prevent it from happening in the future.

The Holodomor Museum is the only museum in the world that tells about the genocide of Ukrainians. We teach to resist hatred and human rights violations, warn society against the recurrence of the crime of genocide by accumulating and disseminating knowledge about the Holodomor.