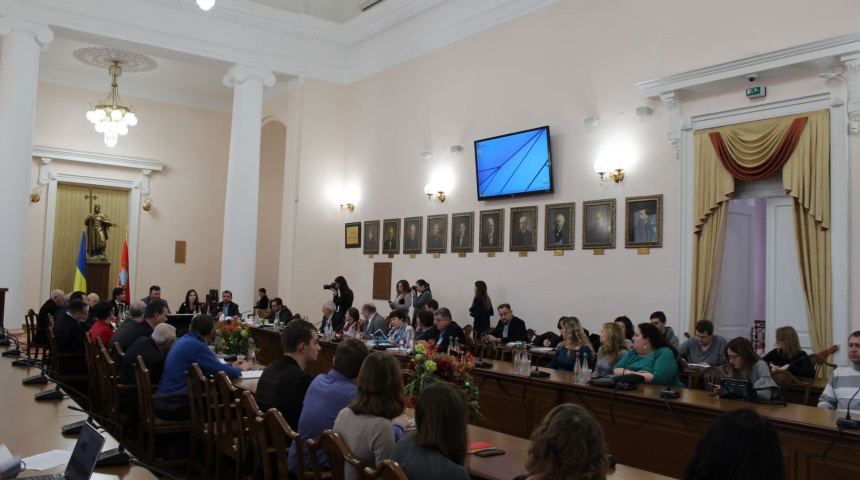 The International Scientific and Practical Conference “Problem of International Choice during the Holodomor-Genocide”  will be held on November 20, 2019, in the main (Red) building of Taras Shevchenko National University of Kyiv (60 Volodymyrska Street, Kyiv).

The Conference will be held on November 20, 2019, in the main (Red) building of Taras Shevchenko National University of Kyiv (60 Volodymyrska Street, Kyiv).

The study of existential choice (choice “to be – not to be”) under the conditions of organized genocide of Ukrainian nation is aimed to discover social and psychological mechanism of such choice. While examining the effects of existential decisions during the Holodomor-genocide, it is also important to investigate the models of further psychological compensation of these actions at personal level, and also intentionally directed and propagated by the Communist regime falsifications of the 1932–1933 events in Ukraine, in particular, by the means of art.

The purpose of the Conference is to focus on irreversible personal choice among existing possibilities while committing the genocidal actions. Modern realities in Ukraine also require social and philosophical analysis. Nowadays, a person who was a “crowd unit” in totalitarian society becomes a mature personality under the conditions of an independent state. Such personality can manifest freedom in one’s thoughts and actions, especially in civil management and protection of one’s own interests at different levels. Ukrainian example reflects a serious danger to contemporary totalitarian regimes. Investigation of existential choice is topical in crisis and emergency situations such as contemporary Russian-Ukrainian war. Therefore, studying history helps us to forecast the future and reflect on the present. The participants of the conference are proposed not only to analyze the conditions under which the critical choice had been to be made, but also to define the historical influence of ethnical and psychological existential notions of Ukrainians of the 1920-30s onto the present day.

The Conference will allow clarifying the effects of the Holodomor-genocide, which still influence the outlook of Ukrainians and directions of movement of civil society and state.

It is planned to discuss such key points:

Materials of the Conference will be published in a special proceedings collection. In order for your report (article) to be published, it has to meet the requirements written at https://visnyk.history.knu.ua/ukr and be sent to [email protected] until September 15, 2019.