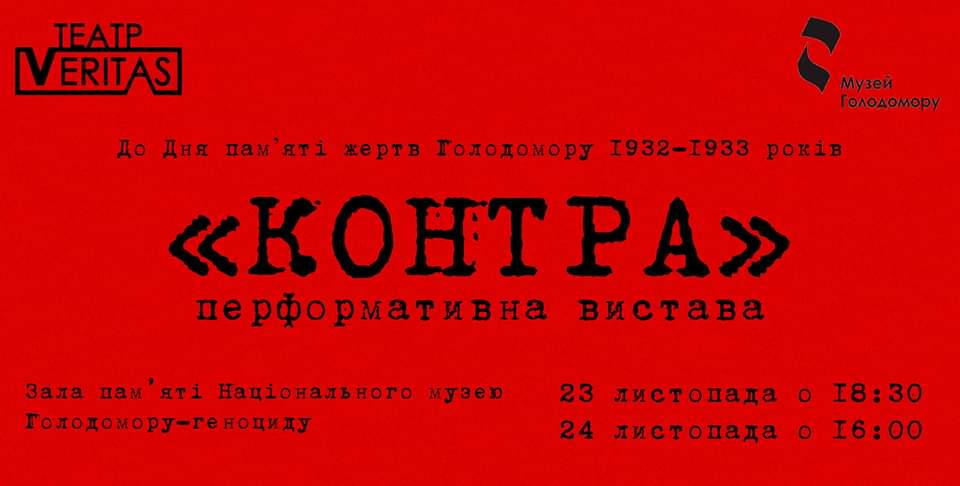 On the Holodomor Remembrance Day (November 23) at 18:30 and on November 24 at 16:00 “Veritas” theatre from Kyiv will conduct the performance “Kontra”.

“We know only what we are allowed to know,”Oleksandra Kravchenko, the script author and the director says. “Where is the truth? In history? In people? In ourselves? What force do we need to confess to ourselves that we live in the world of lies? Is there a chance to punish the guilty?” — the actors of the performative show will look for the answers to these guestions.

According to the script, the main actress walks along all regions of Ukraine during the Holodomor: from Kharkiv to Ternopil, and watches how Ukrainian nation lives. Her father is the supporter of Soviet authorities and considers the counter-revolutioners as evil. However, the girl sees that her relative is wrong: Soviet regime made people die of starvation.

“Veritas” is popular Kyiv theatre, created on the basis of amatour rock opera “MIF” by the students of Taras Shevchenko National University of Kyiv to the 200-years anniversary of famous Ukrainian poet in 2014. One of the most important goals of the young theatre is to popularize Ukrainian national idea.