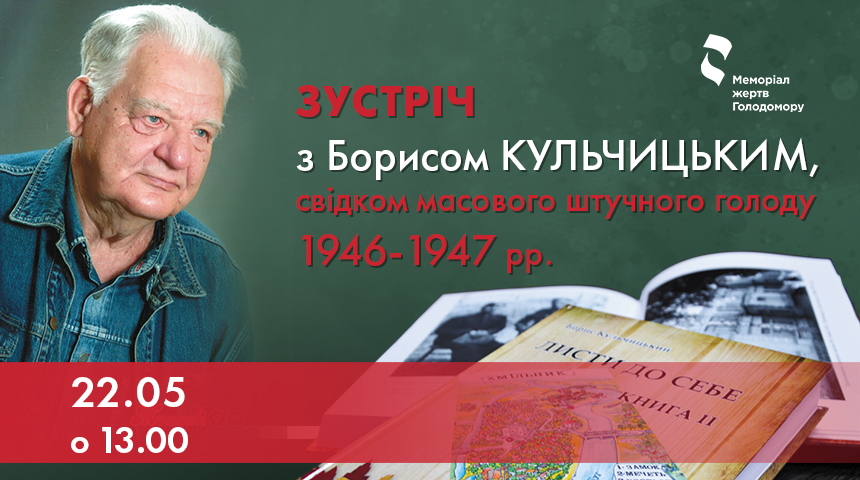 Meeting with Borys Kulchytskyi, Witness of the Artificial Mass Famine of 1946–1947

Where: Hall of Memory of the Holodomor Victims Memorial

“Hard winter of the 46th and the 47th year. Late night. I lay on my army bed. I can not fall asleep. It is cold, the hunger eats my stomach. One thought drills the brain: where to get something to eat. In the imagination, some variants, one more senseless ones than the other, are floating: if… if…, what if… maybe… whether in a dream, or in consciousness, appear… “

Borys Kulchytskyi, an eyewitness of the 1946-1947 famine, carried through all his life such memories and wrote them in his memoirs Letters to Myself.

Within the framework of the Oral History project, the National Museum “Holodomor Victims Memorial” continues to hold the meetings with people who witness the Holodomor-genocide of 1932–1933 and the mass man-made famine of 1946–1947.

Borys (Boleslav) Ivanovych Kulchytskyi was born on February 20, 1929, in Podillya, in the city of Volochysk. As Boleslav recalls, his father, Jan Kulchytsky, worked as a smith at the Volohysk sugar refinery. In 1937, he was repressed and executed by the NKVD for his Polish origin. These were terrible years: collectivization, the Holodomor, repressions… It is not hard to imagine what his life was. This made the family of “enemy of the people” change over thirty places of residence during the four prewar years and stay in Khmilnyk of the Vinnytsia region.

After difficult years of war, Borys Kulchytskyi had to survive the mass man-made famine of 1946–1947, which was ignored and suppressed by the communist regime until the collapse of the USSR. Concerning this tragedy, the concepts of “years of post-war devastation,” and “temporarily difficult life of the population of the USSR” were used.

We invite to hear the truth about the mass man-made famine of 1946–1947 and other crimes of Soviet authorities from the teacher, school principal, writer and eyewitness of those events Borys Kulchytskyi.