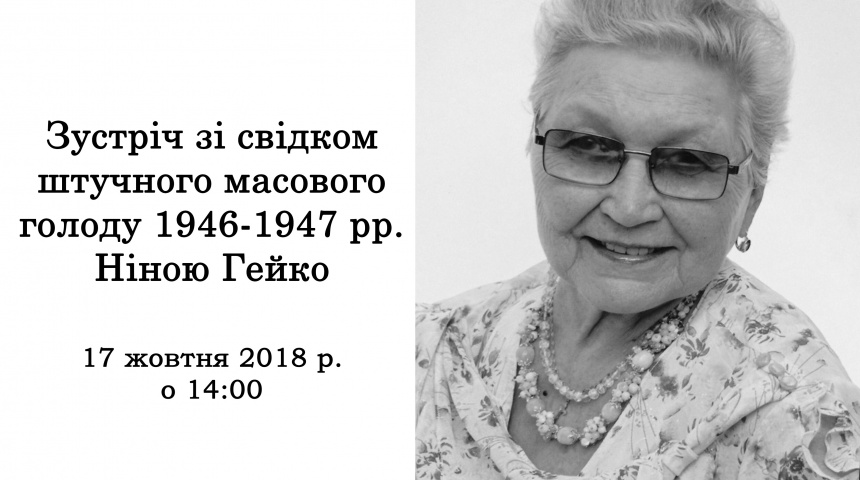 Meeting with Nina Geiko, the witness of the artificial mass starvation of 1946-1947

The mass starvation of 1946-1947 in Ukraine was for a long time ignored and suppressed by communist leadership until the collapse of the USSR. Concerning this tragedy, the terms “years of post-war devastation”, “temporarily difficulties of life in the USSR”, etc., were used.

After Ukraine has got its independence, visible changes happened in understanding and enlightenment of the events of 1946-1947. There was a declassification of secret documents that objectively demonstrated the presence of hunger in Ukraine, and realistically display the situation of Ukrainians during this period and exposed the perpetrators of those difficult times.

In order to understand the processes associated with mass starvation, it is extremely important to listen to people, who were the witnesses of these events.

Nina Semenivna’s family survived due to her mother, who traveled for 6 times during the starvation to Western Ukraine, where she could get food. At that time, Nina Semenivna studied in the 4th grade and was forbidden to have breakfast, because, according to the teacher, she had a “fat face”.

We invite you to the National Museum “Holodomor Victims Memorial” at the meeting with Nina Geiko (born in 1935), whose childhood was lasting during hungry 1946-1947 years.