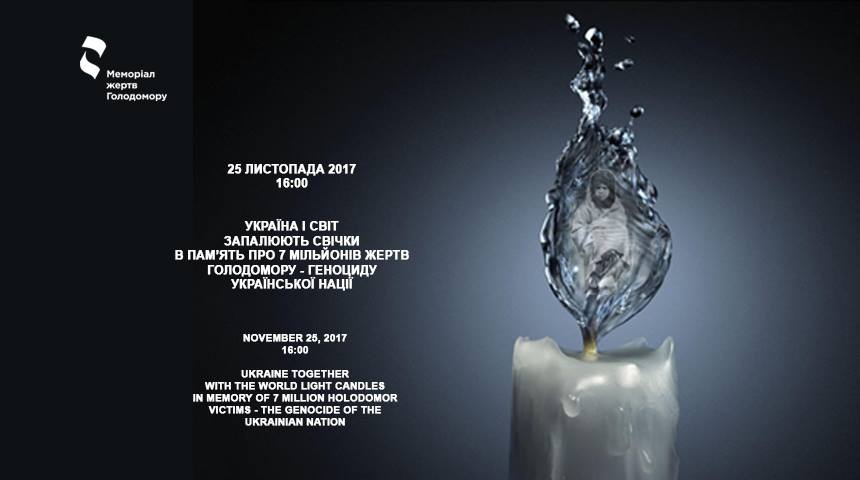 On the territory of the Holodomor Victims Memorial (Kyiv, 3 Lavrska St.) there will be mournful events involving the state officials, representatives of all religious denominations, the public, the media and guests of the capital. Official events will start at 14.00. At 16:00 a nationwide moment of silence and the “Light a Candle” action will be announced.

In 1932-1933, the Soviet government organized a famine, removing, exporting, and simply destroying food on our territory. State authorities, military units and police physically blocked millions of Ukrainians within the starving territories and condemned people to death. The USSR Foreign Minister and dishonest journalists made the massacre in Ukraine “invisible” to the world. Millions of women, men and children had died in cruel torment… The death of millions has never been recorded… Millions were not buried, as it is demanded by the culture and simple humanity…

Today, we, citizens of Ukraine, live in our own, independent state, the presence of which could have protected our ancestors in 1932-1933. They were destroyed because of the strivings to have it.

Our moral duty is to honour the memory of the Holodomor victims and to transfer the history of genocide of Ukrainians to each new generation.

The memory of the Holodomor is a challenge to anti-Ukrainian sentiment, hatred, gross violation of human rights, discrimination and genocide.

Light a candle on November 25 at 16:00 – on the windowsill at home, at the Holodomor Victims Memorial in Kyiv or near the memorable signs in your city and village – in memory of millions of dead and those who survived genocide.

The museum will be open from 16.00. The entrance is free.