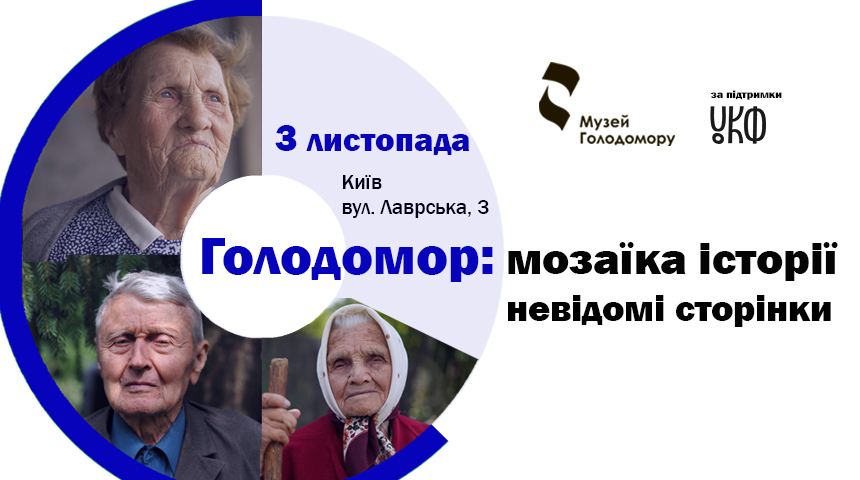 Presentation of the project “Holodomor: a mosaic of history. Unknown Pages” based on the results of the second large-scale expedition across Ukraine

On November 3, the Holodomor Museum presents the project “Holodomor: a mosaic of history. Unknown Pages” based on the results of the second large-scale expedition across Ukraine in searching for witnesses who survived the Holodomor of 1932-1933.

There are very few Holodomor eyewitnesses left (and they are now at least 95 years old), which is why their memories are so valuable.

The presentation will begin at 12 pm in the Hall of Remembrance of the Holodomor Museum (Kyiv, 3 Lavrska Street).

During 30 days, the Museum team traveled almost 10,000 kilometers, visited 92 settlements, where they recorded 120 stories with the Holodomor eyewitnesses.

From the context of the project:

“My mother gathered her things and went to Russia, they changed things for food: millet, for example, flour, well, anything… The village was on the sand: there was only sand,  somewhere there to find at least milkweed to eat – no, there was nothing from vegetable food, no sorrel, nothing. Well, there we were sitting waiting for our mother and waiting till I was almost starving to death. I was swollen of hunger, and I almost didn’t move; I lay down more, well, if one or two days mother hadn’t arrived, I would have died,” remembers Eugene Tymofiyovych Zamozhsky, born in 1926, Cherkasy village Byshkin Zmiiv district of Kharkiv region.

“We had kept our properties till this hunger appeared. This hunger fell on us suddenly. I don’t even know where people disappeared. They gave, ate, worried about the children, not let them die. And then some grew up…; Yes, that’s right. Then we collected hawthorn, then rotten potatoes, then… Nothing to eat…,” – memories of the Holodomor by Olena Sydorivna Babasyuk, born in 1922, was born in the village Kalnia, modern Khmelnytsky region.

“People were dying en masse; I’m telling you, that they were lying there en masse in the house for a week or five, or maybe even for ten weeks in the house because no one came in, no one cared where Ivan was, no one wondered where Roman was or…. no one… people were lying there… till someone accidentally…; there were neighbors, also exhausted and weak. Everyone was weak,”  remembers Oksana Semenivna Irtiuga, born in 1927, Zhdanivka, Magdalen district, Dnipropetrovsk region.

Witnesses’ video stories you can watch following the link:https://cutt.ly/4EN3XGP

For more information about our projects and support them, contact us by email [email protected] or by phone: +380674397507 (Olga Yurchuk, Museum Communicator).