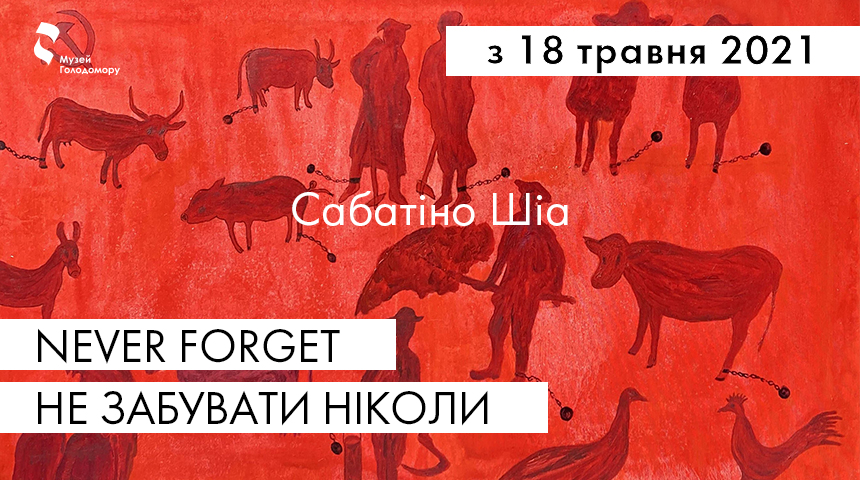 Red Stalin and cows in handcuffs: The exhibition of Italian artist is opening in the Holodomor Museum

On May 18, 2021, the Holodomor Museum will present the art exhibition “Не забувати ніколи. Never forget”, created by the famous Italian artist Sabatino Shia. The presentation will take place at 13:00 in the Museum. Accreditation is avaliable by the link.

The event will be moderated by Iryna Kurhanska, curator of the exhibition.

Sabatino Scia is an Italian writer and artist who works with fairy tales and fables and through them presents difficult traumatic topics for adults and children. In recent years, he has become interested in the history of the Holodomor, the genocide of Ukrainians that killed millions of Ukrainians in 1932–1933.

Scia: “When I first read the stories about the Holodomor, I immediately realized that I had to make a contribution.”

On September 18, 2018, the first five works of Sabatino Scia were gifted to the collection of the Holodomor Museum in Kyiv. Thanks to the support of Maksym Kovalenko, Consul General of Ukraine in Naples, this year 16 more paintings have become the property of the Museum. In total, the artist plans to write a series of 50 paintings.

Red cows in handcuffs as hostages of crazy politics; Green Jesus as a symbol of ruined villages and hungry peasants at the foot of his crucifixion; brown, black and green animals that became the ghosts on earth, which was a symbol of wealth and fertility; snakes as evil spirits and demons without a drop of pity are the symbols used by the artist.

The themes of the artist’s paintings are collectivization, dekulakization, mass mortality and mass graves during the Holodomor, the figure of the dictator and criminal Joseph Stalin, and the general conditions of human existence in a totalitarian society such as the Soviet Union.

Scia chooses for his works a simple figurative, almost primitive language. With the help of forms, figures and signs, his paintings speak symbolically: skeletal bodies, faces in the form of deadly masks, open mouths of despair and hunger, reminiscent of Edward Munch’s “Scream” and returning to the Holodomor victims.

The paintings will be exhibited together with household items of Ukrainians of the 1930s in the Museum’s Hall of Memory. In this way, the visitor will be able to learn the story on two levels: sensual (with the help of bright paintings by Sabatino) and rational (with the help of exhibits, audio guides in Italian and historical explanations).