Genocide of the Ukrainian nation – the Holodomor

The difference between the Holodomor and the All-Union famine early 1930s, which some researchers-amateurs often appeal to, is as follows: farmers outside Ukraine and the Kuban were the victims of hunger as a social class, and Ukrainian peasants were starved to death for belonging to the Ukrainian nation. The validity and fairness of this evaluation are clear, based on analysis of policy Bolshevik regime in Ukraine and the Bolshevik practice of the national question.

The Leninist-Stalinist leadership always attached particular importance to Ukraine, because they believe that its detention in Moscow’s orbit is an important condition for the existence of the communist regime and the Soviet Union.

The national revival of Ukraine during Ukrainianization (political retreat of the Bolsheviks) led the Soviet leadership in the fear of exit Ukrainian republic, which had the right under the Constitution of the USSR (1924).

Anti-Ukrainian nature of the Holodomor confirm a number of facts:

During the Holodomor the national minorities of Ukraine also affected for living among Ukrainian nation, which was victim of genocide. Only Ukrainian nation was the subject of state building and self-determination by the Constitution of the USSR in 1924 and had the right to exit from the Soviet Union and build an independent Ukrainian state.

In term of international law, the death of minorities during the Holodomor was a crime of extermination and the fact that aggravates the guilt of organizers of Holodomor.

Young people listen to the report of the head of the political department of Slanets MTS Manevych on the tasks during the harvest. Voznesensky district, Odesa region, 1932 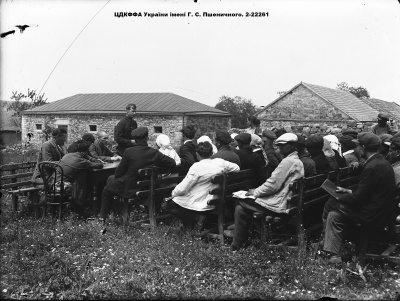 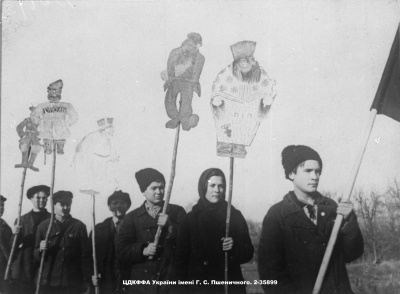 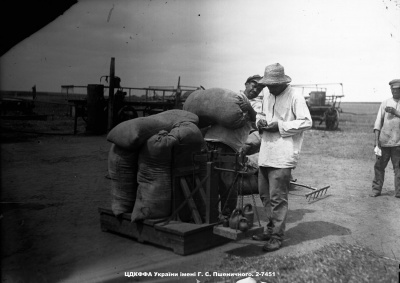 Sorting of seeds in the granary of the organization "Zagotzerno." Kharkiv region, 1933 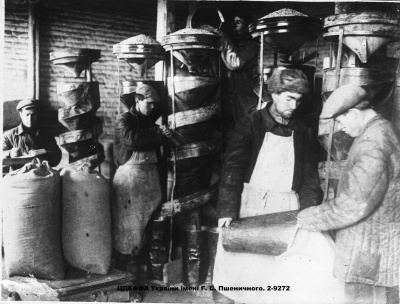 Loading of the steamer at the grain elevator in the Mykolaiv port. Mykolayiv, 1931. Reproduction. 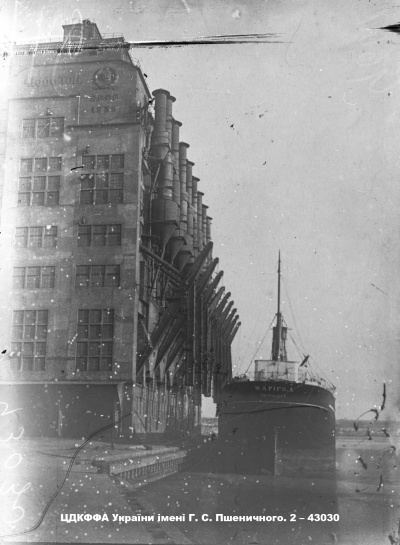 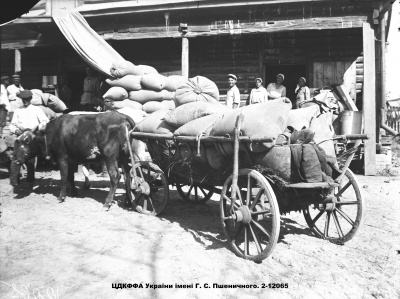 Preparation of grain for shipment to the dump in the collective farm named after H.I. Petrovsky. Petrovo-Solonykha village, Mykolaiv region, 1933 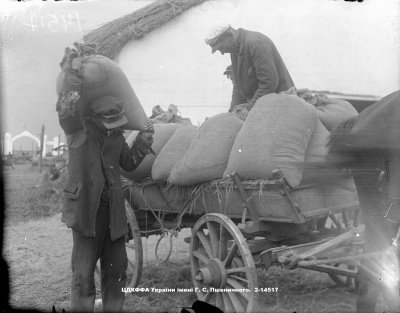 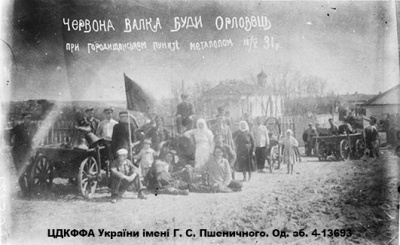 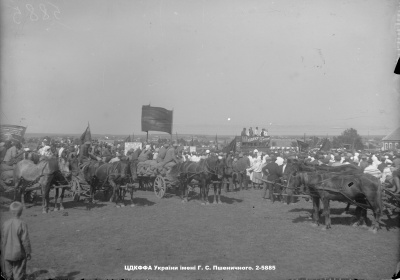 Honcharenko, a member of the Komsomol, a collective farmer of the H. Petrovsky Agricultural Artel of the Olshansky Village Council of the Kharkiv Region, protected the artel's seed and insurance funds until 1933. 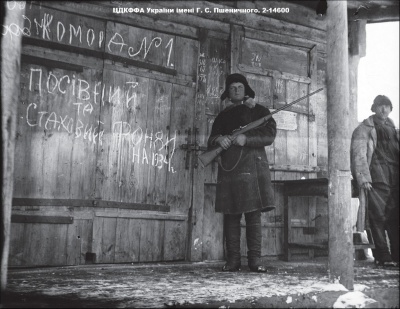 Rally near the dump after handing over the bread. Uli village, Kharkiv region, 1932 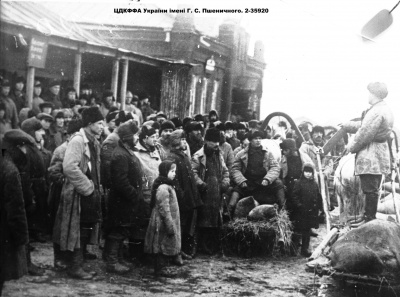 Collective farm yard in one of the villages of Kyiv region. Kyiv region, 1933-1934 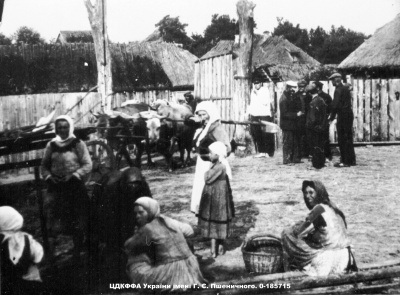 Celebration of the harvest day in the collective farm "Victory". Vasylkiv district of Dnipropetrovsk region. 1933 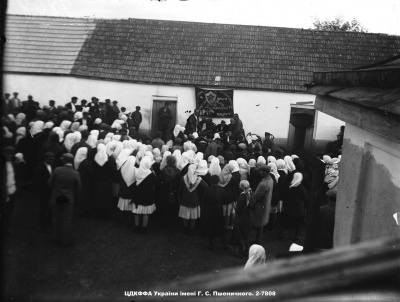 Solemn entry into the field before the start of the harvest on the farm named after H.I. Petrovsky. Brazhenko village, Zhytomyr region, 1930-1933 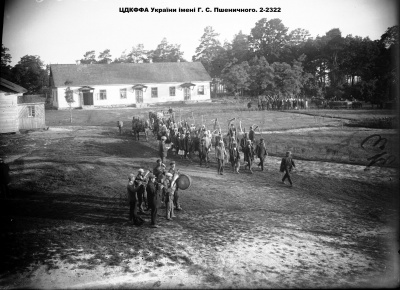 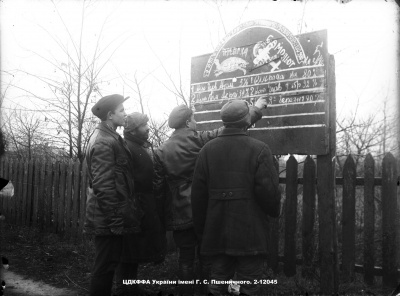 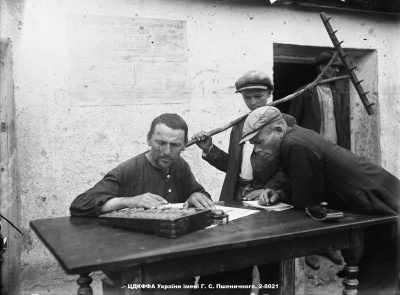 Meeting of the city commission on cleansing the party. Kostiantynovka, Stalin region, 1933 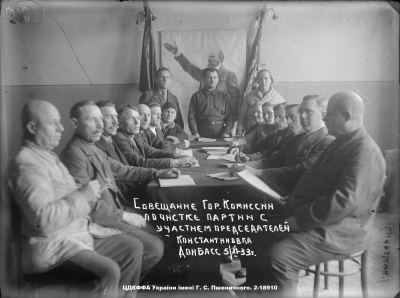 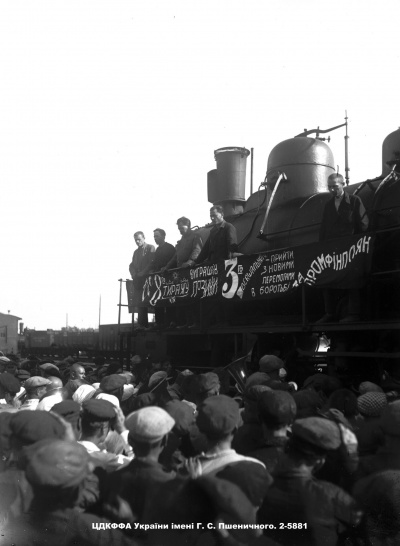 Medical workers are examining a patient in the medical unit of a homeless colony in Dnipropetrovsk. 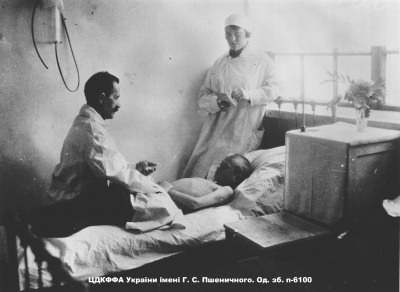 Leaders of the party and the government of the USSR on Pryvokzalna Square in Kyiv on the day of moving from Kharkiv to the city of Kyiv, 1934 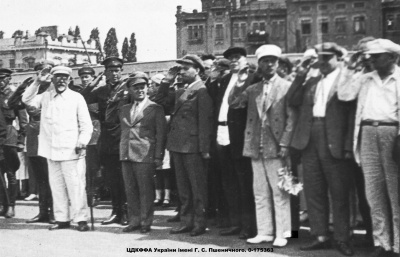