Holodomor was preceded a policy of collectivization, which was the forcible inculcation of collective economic system of state form. Accustomed to private ownership Ukrainian peasants did not perceive the new system. Therefore, the introduction of collectivization was accompanied with coercion peasants to join collective farms, terror, arrests and deportations of dissents, which Soviet propaganda branded as “kulaks”, “bourgeois nationalists.” Regime declared war against these people and destroying them physically.

Before the collectivization in 1929, a major producer of agricultural products were individual farms. Farmers had a monopoly in the production of grain crops (flax, hemp, hops, sugar beet), animal products. Actions of Soviet power as taxing households, fines, expropriation, destruction of wealthy households led to so-called “grain problem”, as recession.

Due to collectivization Soviet government planned to solve a number of critical issues for themselves: riding freedom of action of the agricultural population, preventing the national resistance movement, solving the “grain problem” by eliminating 5.2 million farms and creation on its base 25 thousand of collective farms.

Regime began a class struggle by dividing the peasantry into classes: poor, middle and kulak. Last of this classification was wealthy hosts and enemies. In May 1929, the Council of People’s Commissars presented a formal definition of kulak farming, which in this economy is regularly used hired labor, or had a mill, dairy, rented farm machinery and premises; relatives were involved in commercial activities or usury or had other unearned income, especially from belonging to the clergy.

According to these definitions almost every farmer could be punished. There stamp “prokulak”, which was farmer that did not have their own economy, but refused to join the collective, somehow showed disloyalty to the government. The vagueness of the concepts of “kulak” and the more “prokulak” expanded the category of victims.

One way of ignition the class struggle in the countryside was confiscated grains in the “kulaks” and distribution of 25% its among the poor and salaried workers. On December 27, 1929, Stalin declared goal of eliminating “kulaks as a class”. On January 30, 1930 published the secret decree “On measures on liquidation of the kulak farms in the areas of complete collectivization” which included mass arrests, robbery and deportation of peasant families. According to the decree in the USSR there were subjected to dispossession of 3-5% households. According to the categories there were established penalties for “kulaks”, first category was considered the most dangerous, as registered by the OGPU “for rebel organizations” imprisoned to concentration camps; the second category of kulaks were deported to the Northern Territory, Siberia, the Urals and Kazakhstan; kulaks of third  part were dekulakized and evicted within the area of residence.

Lists of “kulak farms” for eviction made by the district executive committee on the basis of decisions of the meeting of farmers, laborers and the poor. Confiscation of property carried out by special authorized the participation of village council chairmen of collective farm and marginal groups. Property confiscated (means production, property, land, residential apartments) transferred to farms, and seized books and savings bonds – to the NCF.

According to this decree to the USSR in late 1930 at places 550 of district-level party functionaries were assigned to eliminate kulak farms. Expropriation of property in the wealthy owners  were actively involved also seconded to the village workers and rural assets. However, the amount of assets in the total mass was not great. Important role in the preparation and implementation of repressive measures against “kulaks” was played by a Joint State Political Directorate.

General information about Ukrainian eviction during deportations and expulsions to date has not yet been established by scientists. In the period from 1928 to the end of 1931, the number of farms declined by 352 thousand (over 1.6 million people).

The government required that even small villages had prison (before the revolution, they exist only in district centers). These prisons were selected not only for fear of farmers who expressed dissatisfaction or voted against rural collective meeting. Resistance to collectivization often took on more violent forms. In the years 1929 – 1930 there were made tremendous efforts in order to prevent farmers possessing weapons. Decrees of 1926, 1928 and 1929 introduced compulsory registration of hunting weapons. In August 1930, through a small rebellion became clear that the resolution was not performed, there were ordered to “hold great searches.” Of the registered of OGPU in 1930 13754 (2.5 million members) of peasant unrests, riots and uprisings the  4098 (more than 1 million participants) took place in Ukraine. Some of them had political nature: the participants proclaimed the slogan “Go away Soviet power!”, “Long live an independent Ukraine!” And sang “Ukraine has not perished …”

As resistance of the population unfolded with force, with the same force and repression carried out its policy of collectivization, the failure of which in Ukraine in March 1930 Stalin realized. Then the power refused the forced collectivization to regroup their forces to attack as soon as possible (detention and deportation were continued during the Holodomor).

Ukrainians massively came out of farms, but the farms still had about 3 million households. In First collective farm year, Ukraine performed procurement plan due to favorable weather conditions in 1930 and a good harvest. But the peasants were deprived of common stocks that traditionally made a living.

In 1931 the peasants were ignored and the policy approved an excessive procurement plan, implementation of which was accompanied by confiscating maximum amounts of grains from collective farmers and individual farmers. Consequently, in many places a hunger strike began. Soviet leadership was aware of the situation of Ukrainian peasants, but it did not stop predatory grain purchases. In early 1932 the Central Committee of the All-Union Communist Party Bolsheviks demanded over of bread. From this period, the Soviet government began to artificially create a Ukrainian living conditions calculated to partial destruction of the nation – the Holodomor.

Farmers are handing over grain to the state in Illintsi village of Vinnytsia district. 1929 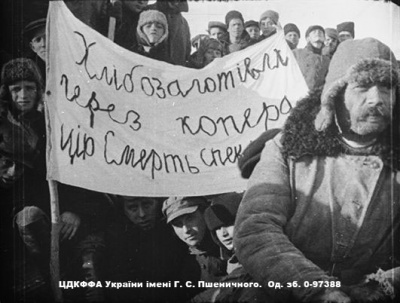 The defendants include members of the Yakushinets village council of the Vinnytsia district, who are accused of distorting the party's policy on collectivization. 1931 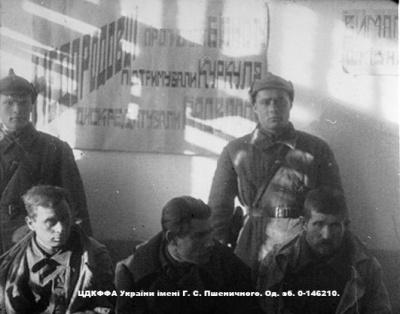 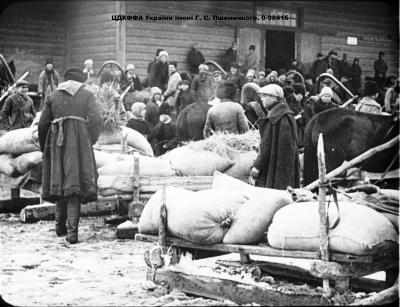 Farmers are handing over agricultural equipment to the collective farm named after the 13th anniversary of October. Krusheltsi village, Vinnytsia Region, 1931 - TsDKFFA of Ukraine named after H.S. Pshenychny. 0-146222 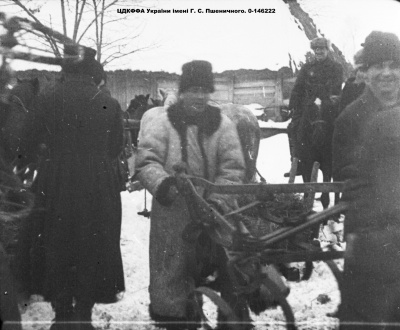 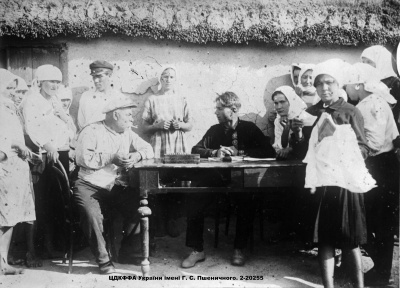 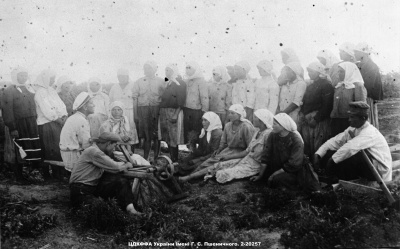 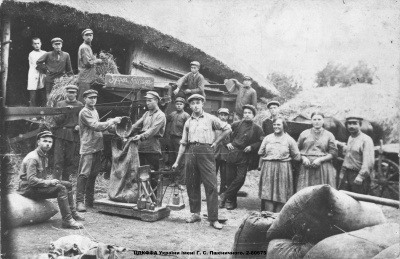 The first roll with a grain of the state farm "Kakhovka" of the Kherson district. Kherson region, 1930.TsDKFFA of Ukraine named after H.S. Pshenychny. 2-125421. 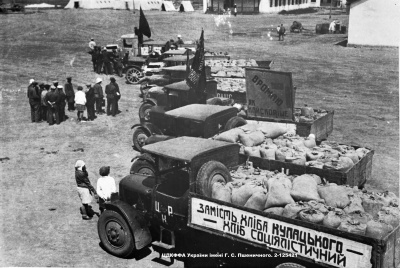 Employees of the Serhiiv Village Council near the visual agitation of seven collective farms. Donetsk region, 1930-1934 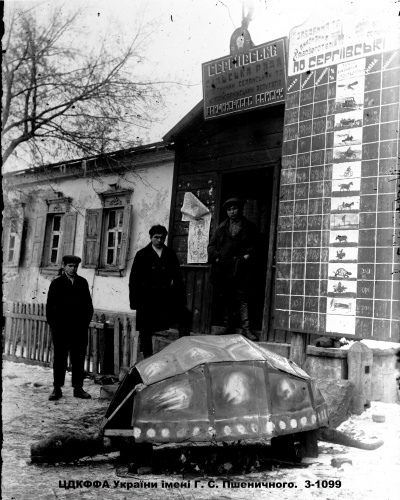 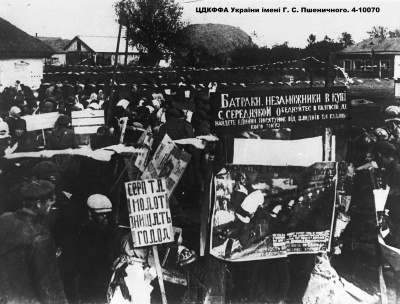 Questioning of Abolmalov, a member of the Committee of Poor Farmers, accused of carrying out kulak agitation among farmers in Kramchanka village in the Sumy region. Sumy region, 1929 - TsDKFFA of Ukraine named after H.S. Pshenychny.2-10287. 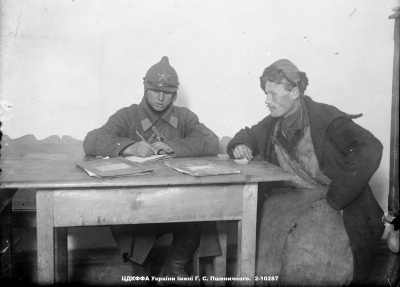